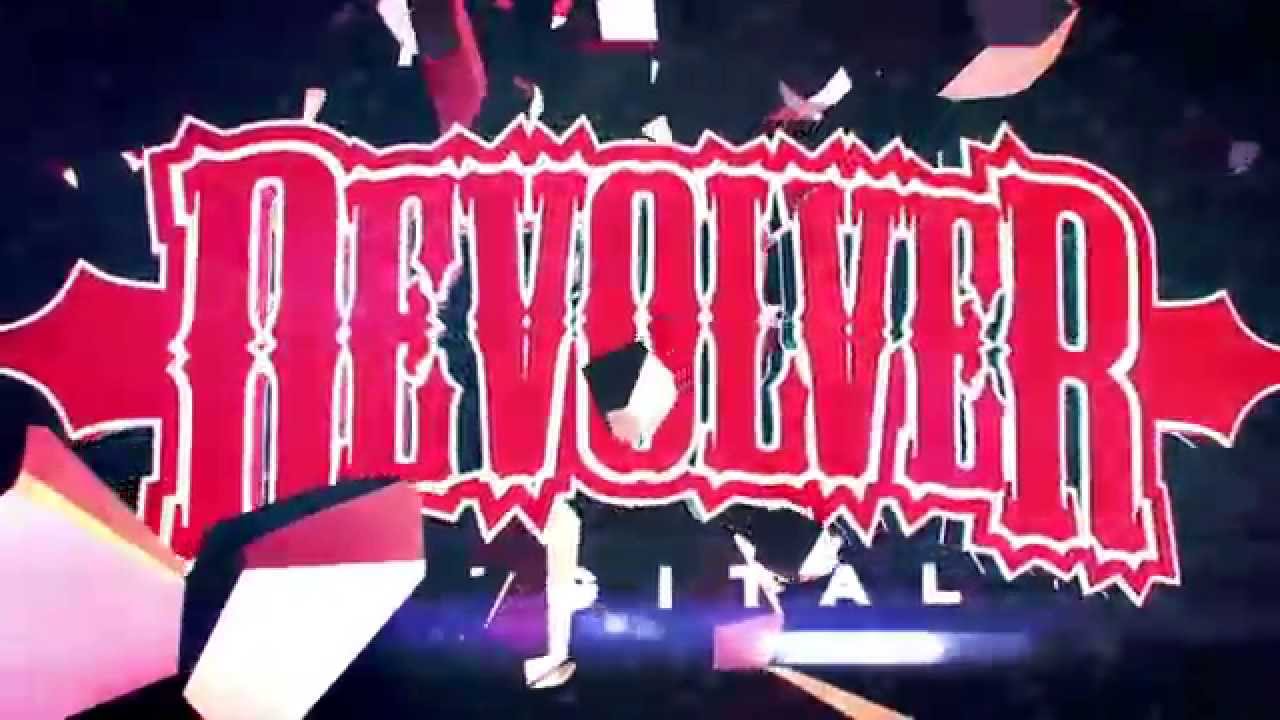 The Devolver Digital team and the wonderful developers we work with are thrilled to announce an incredible roster of games coming to PlayStation platforms this year and next! This partnership is the result of incredible enthusiasm and excitement across the board from the folks at PlayStation and a great deal of support for the games and the developers behind them. The relationship we have with our developers and partners are just as important to us as the game themselves and working with partners that believe in what we are doing is tantamount to our success. Our team listened to what you, the gamers, have asked for in email, on Twitter, and at conventions and now we’re proud to share this collection of incredible games coming to PlayStation 4 and PlayStation Vita this year and next.

Our team has been friends with Croteam since they were just a group of childhood friends working out of a small apartment on a tech demo called Serious Sam, partnering on nearly every game in the legendary series since. As Croteam worked on the next Serious Sam game, they began experimenting with more creative and complex puzzles inside the new Serious Engine 4 and ended up creating a unique new game concept they called Nexus. Once we got our hands on the game we couldn’t put it down as solving one clever puzzle simply tempted us into the next mind-bending challenge and the next thing you know The Talos Principle was born. 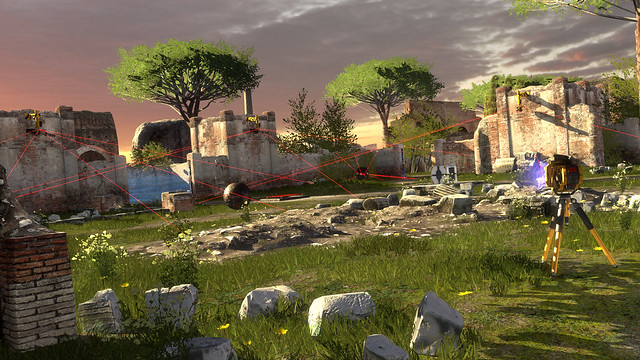 The Talos Principle is a philosophical first-person puzzle game from Croteam, the creators of the Serious Sam series, and written by Tom Jubert (FTL, The Swapper) and Jonas Kyratzes (Infinite Ocean). Players are tasked with solving a series of increasingly difficult series of complex puzzles woven into a metaphysical parable about intelligence and meaning in an inevitably doomed world. The Talos Principle will be coming to PlayStation 4 this fall and we apologize ahead of time for the mental anguish hiding behind the brilliant puzzles from the minds at Croteam.

The Devolver Digital team often scours through game jam games as fans and as evil publishers looking for incredible game ideas from talented developers. One such case is Titan Souls from Acid Nerve, which garnered all sorts of awards and attention coming out of Ludum Dare 28. 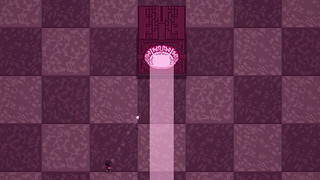 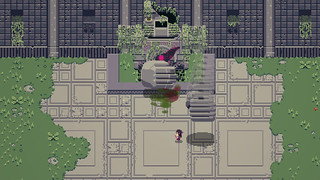 Inspired by minimalist games like Shadow of the Colossus and the intensely challenging Dark Souls, Titan Souls tells the story of a nameless warrior’s quest to bring down the ancient titans with nothing but a single, indestructible arrow. There are no lesser classes of enemies, no crafting, no grinding and no side quests – just you and the two dozen titans scattered throughout the land awaiting your challenge. We’re excited to we partnering with developers Mark Foster, David Fenn, and Andrew Gleeson to bring Titan Souls to PlayStation 4 and PlayStation Vita early next year.

Hotline Miami splashed on the scene with its perfect blend of white-knuckle action, searing neon visuals, and a soundtrack that drove the action from start to finish. Dennaton Games created a masterpiece and developed a few new ideas for updates to the game that filled out the story more from the perspectives of more factions involved in the conflict. Those ideas grew and expanded to be larger than Hotline Miami itself and thus Hotline Miami 2: Wrong Number was born. 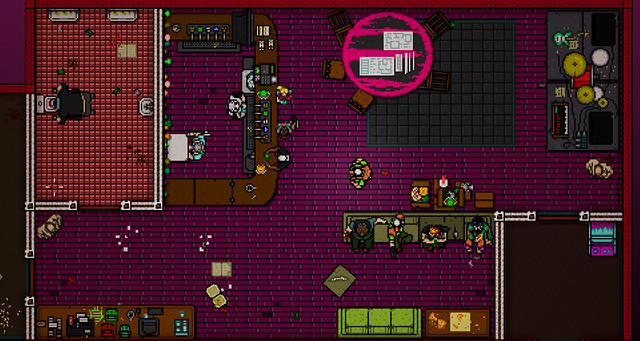 Fans of the original game can look forward to the trademark fast-paced combat and intense soundtrack but with new twists and turns as the narrative shifts between different factions affected by the events of Hotline Miami. Hotline Miami 2: Wrong Number will be coming to PlayStation 4, PlayStation 3 and PlayStation Vita later this year.

Broforce from South African developer Free Lives stole our hearts as soon as we witnessed our air-to-ground missile strike as two of our bros tumbled down with the crumbling terrain and the other two set the whole scene in slow motion with a super sweet high-five. It’s insane, it’s over the top, and you’re going to love every minute whether going in as a lone wolf or bringing the pain with four-player online cooperative play. 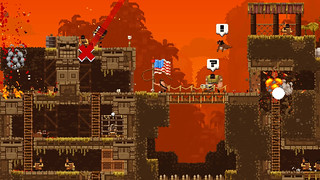 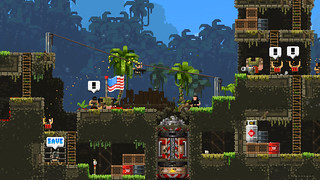 Broforce is coming to PlayStation 4 and PlayStation Vita early next year with some fun bells and whistles and tactical strikes. Keep up with ongoing development at broforcegame.com and by following @Free_Lives on Twitter!

Developer Roll7 is stocked full of crazy dudes. As the team wrapped up their punishing skateboard opus OlliOlli on PlayStation Vita, they pitched us an expanded version of their Not A Hero prototype where an unheralded hero must clear the city of crime at the behest of a time-traveling anthropomorphic rabbit running for mayor. Sold. 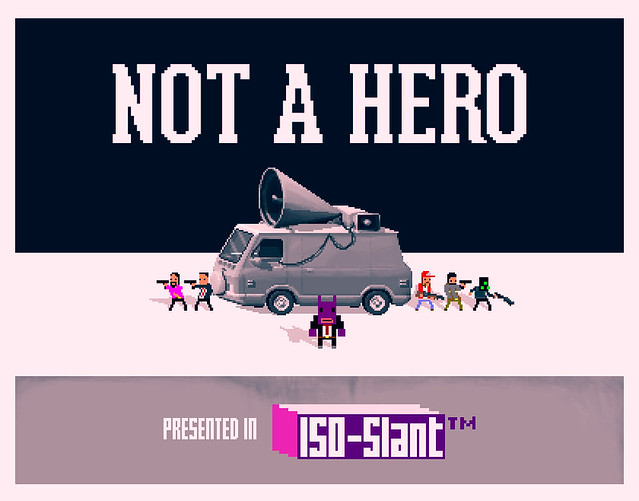 The presentation was simple and straightforward – again, it was just a prototype – but it’s mix of Elevator Action, Hotline Miami, and Gunpoint combined to make something that felt absolutely magical and altogether unique from the aforementioned games. Built on Roll7’s patented ISO-Slant™ technology, Not A Hero is shaping up to be the greatest 2¼D cover-based indie shooter of all time ever. Look out for it on PlayStation 4 and PlayStation Vita early next year!

While doing a bit of competitive research during the production of Serious Sam 3: BFE we checked out an impressive classic FPS called Hard Reset from a new independent developer Flying Wild Hog out of Poland. When it came time for us to reboot and reimagine the long idle Shadow Warrior series we immediately contacted Flying Wild Hog and as luck would have it their team was full of longtime Shadow Warrior fans. 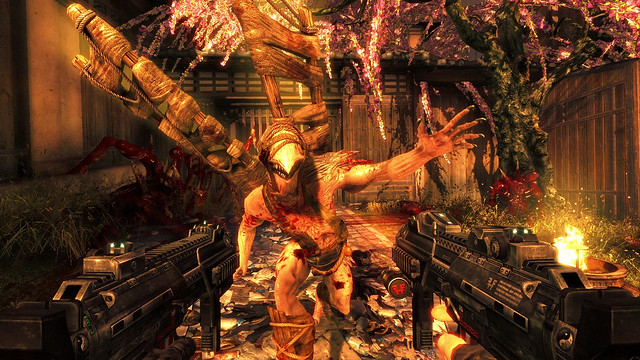 Shadow Warrior is bold reimagining of 3D Realms’ cult classic shooter that blends the viciously over-the-top gunplay of the original with the elegant precision of the powerful katana. The reluctant hero Lo Wang certainly comes stacked with heavy-hitting guns to pummel the demon hordes back into the shadow realm but the real fun is reserved for his classic katana. Melee weapons had long been relegated to backup weapons in first-person shooters, used only when all other ammunition was depleted. Flying Wild Hog flipped that on it’s head with Shadow Warrior by making the katana the most devastating weapon in the game when leveled up and skillfully used in combat. Shadow Warrior will slice its way onto PlayStation 4 later this year.