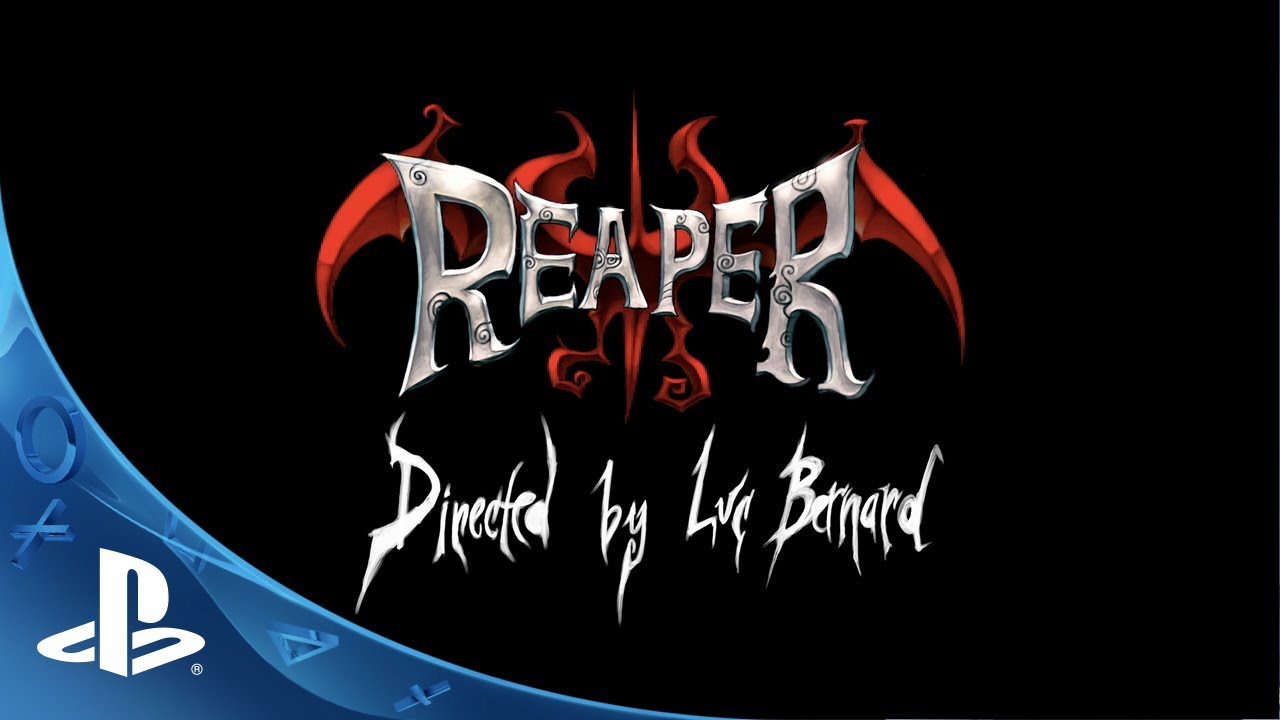 Hello, I’m Luc Bernard. I’m the creative director, and art director, and — well — I look after many other roles on Reaper for PS Vita. Now this is my first time doing a post on Playstation.Blog, so it may sound a bit all over the place!

I don’t know if anyone remembers, but years ago Reaper was announced back in 2010 for Playstation Portable. The title had to be put on hold for a while sadly, but now it’s back. I’d say it’s a great thing that I waited this long to resume development and show it to the world.

Reaper is a free-to-play title exclusive to PlayStation Vita. Personally the Vita is my favorite portable system for many reasons, which I don’t think I need to go into since you Vita owners already know them.

Now let’s talk about the gameplay. Reaper is an action RPG platformer, so you’ll be leveling up, pulling off combos, destroying enemies, and all those kind of things. But what makes it unique is the card system. Now don’t worry, it’s not like those mobile games that have cards where you can’t do anything with them — these cards will actually be awesome, and there’ll be different types:

At launch there’ll be at least 100 different cards to collect, and of course with updates there will be more all the time.

Now for multiplayer, we are still thinking about how it will work, but I can assure you that, to me, a free-to-play game needs great features. So we’ll keep you guys updated, but right now we’re making sure the single player is amazing.

The story in Reaper has also been very important to me. I got inspired by many moments in my life while coming up with it. Actually, when I was thinking about it, it was during a dark period of my life when the woman who raised me passed away, and then while I was still working on the game my ex wife also died. Reaper has a focus on what it is to lose important people in one’s life, in different ways.

For example I want to show you Death’s backstory, one of the main characters.

For as long as she can remember, Death has worked tirelessly to take the lives and souls of humans. Constantly ending the lives of innocents and corrupt alike began to take its toll on her and she soon grew lonely and depressed. Eventually, she fell in love with a mortal man. After much debate with her sisters, she chose to disobey them and granted her lover immortality and in doing so, created the first Reaper.

His newfound immortality and thirst for power corrupted him to the core and he soon left her. Death, heartbroken, was too devastated to continue her task. She withdrew from the world and hid herself away from everything and everyone. Discovering her failure to cull the human souls, her sisters captured her and grafted a sentient exoskeleton construct onto her body. With its power, her sisters enslaved her and forced her to return to her work.

Death reluctantly accepted her cursed fate and set out to make sure she would never make the same mistake again. Using all of her power and will, she began to create a massive army of Reapers to do her bidding. With her gift of power also came great loss. She took the reapers memories from them and bound them in mortal bodies, so none could ever leave her side. Now she has become a cold and bitter husk of her former self, eternally a slave to her dark task.

So that’s all I can reveal for the moment. Hopefully at E3 you guys can see the game, and I’ll keep you updated soon.