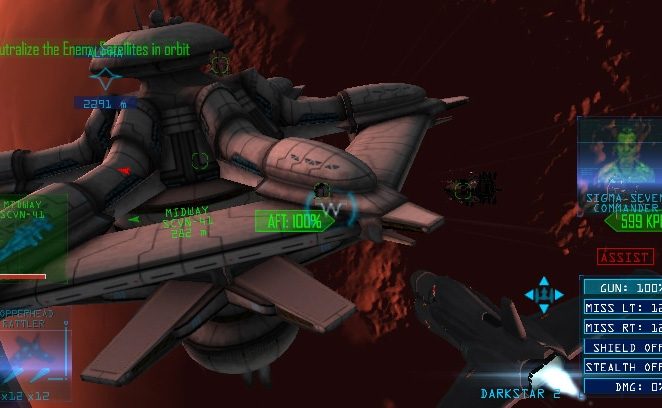 In October’s PlayStation.Blog entry, we welcomed you to Starlight Inception, the first-person / third-person space combat experience coming to PS Vita today. This is the first game of its type on Vita, containing a single-player campaign, single-player Fly Patrol (tower defense), and several multiplayer options.

The inspiration for Starlight Inception was the old space sim games that we loved as kids, but with a more sophisticated, modern sensibility, and tailored for the controls of PS Vita, PS3, and PS4. The game will have a retail price on PS Vita of $22.99.

In Starlight Inception, you’re a young space fighter pilot one hundred years from tomorrow, who serves in the United Star Force (USF), a multinational force which keeps the peace on the colonized planets and moons of our star system. You are assigned to the U.S.F. Midway (SCVN-41), a space carrier which houses the most advanced space fighters, bombers, and transports that humankind has ever seen.

The first mission starts as a training exercise, but is rapidly interrupted by the Pentad — a simultaneous terrorist bombing of five Earth cities, including Chicago, Shanghai, and Tokyo. Pursuing the perpetrators of the bombing as they attempt to escape from Earth orbit, you rapidly realize that this isn’t an isolated incident — we’ve been thrown into a global (and system-wide) war.

The game has more than 40 hours of single-player gameplay, an online multiplayer component for up to eight players, and a first-person mode which lets you explore your mothership between missions — see your bunk area, the bridge, the hangar bay, observation decks, and visit the Pilot Ready Room, where you receive your mission briefings.

So what does a mission look like in this game?

You make your way to the elevator, engage the selection for the ready room, and hang on as the conveyance whisks you several decks higher. The doors open to reveal a ready room — the area where pilots are briefed before their missions. You hit the “Start Mission” button and are greeted with a holographic transmission from Fleet Admiral Heyerdahl of the USF command — you are to fly to Mars and directly engage units which were part of the Pentad attacks on Earth.

You travel to the hangar bay, choose your fighter from an array of available craft, and equip it with a large selection of guns, missiles, stealth coalescers, shield generators, and other configurable enhancements. You tap the ENGAGE MISSION selection, and are in the launch bay over the planet Mars.

You launch with a whoosh and fight through the enemy forces in orbit. A wave of Olympus Empire Dominance fighters approaches and intelligently evades your forces. You have three tactical partners, Darkstar One, Three, and Four, that you can issue commands to — but you are still outnumbered. Darkstar One reports that she has taken 50% damage. You tell her to assume a defensive position while you push forward on your left analog stick and hold down the right shoulder button to accelerate. After you neutralize the Olympus threat, you breathe a sigh of relief, and stare at the impossibly huge red orb before you.

But your break is short-lived. You are ordered to fly down to the surface to engage the ground forces. You push down on the right shoulder button and your fighter accelerates wildly down… down… even further down, through the outer atmosphere of the red planet. And you are suddenly in the sky over Mars, barreling headlong toward the Martian dust before you pull up. You quickly switch to cockpit view to check your instruments.

What’s that? A Surface-to-Air Missile on the HoloRadar? Better evade it as quickly as you can before you become just another particle of that Martian dust.

Multiplayer is robust and one of the reasons we did not ship back in December as originally planned. The game supports several play modes for up to eight players in both team and deathmatch configurations, and makes available all of the fighters, bombers, and transports from single player, plus additional multiplayer-only craft, including several enemy craft.

The modes include Free For All (Deathmatch based on frags or timer), Team Deathmatch, protect the flag, and capture the flag. The “flag” in this case is a sphere of light which you can control for your team. We have created ten arenas, loosely based on the levels in the game, in which to fight. You can fly through the caves of Rhea, a moon of Saturn, or fly through the radioactive remnants of Chicago, engage in combat within the Space Station Sigma Seven, or hit afterburners over the lunar surface. We expended a great deal of effort to make multiplayer a fun and compelling experience on PS Vita, as we did with the rest of the game.

Another item that we addressed was the feedback received from our beta, which was released in November of last year. The chief comment was framerate. We have made huge strides in improving framerate in all modes of the game, while fixing other bugs along the way. The action is now silky smooth, even when traversing the area between space and planetary atmospheres. We have also improved our lighting model.

We should also mention the soundtrack, performed by three time Grammy-nominated composer, David Arkenstone. David had previously contributed music to World of Warcraft: Cataclysm, and is amazingly talented. It has been a true pleasure to work directly with David to match his musical style to the battles, and quiet stretches, that occur within Starlight Inception. David’s music has definitely captured the excitement and danger of the missions.

There are numerous PS Vita specific features in Starlight Inception — we make use of the accelerometer, the front touch pad, and the sticks. You can use the accelerometer to control your ship’s flight just by shifting the Vita from side to side. The touchpad is enabled for menus as well as icons within the game — especially the toggle for camera controls and roll control tied to the right analog stick.

We wanted to offer a genuine space combat experience with Starlight Inception. In order to do that, we worked with military advisors who reviewed the script and character dialogue. We have also entered into a licensing agreement with Lockheed Martin for the use of fighter names and the Lockheed name. This is the first time Lockheed Martin has ever endorsed a product that portrays future products with the Lockheed name, and we were both honored and excited to be able to do this. We feel it really adds to the realism of our game.

Finally, we wanted to say thank you to all of our supporters who believed in our game before it was a game. First and foremost, we are working to make good on our promises to you folks and hope we are delivering a product that is light years beyond what you expected and hoped for.

And we are always happy to answer your questions. Light up the sky…