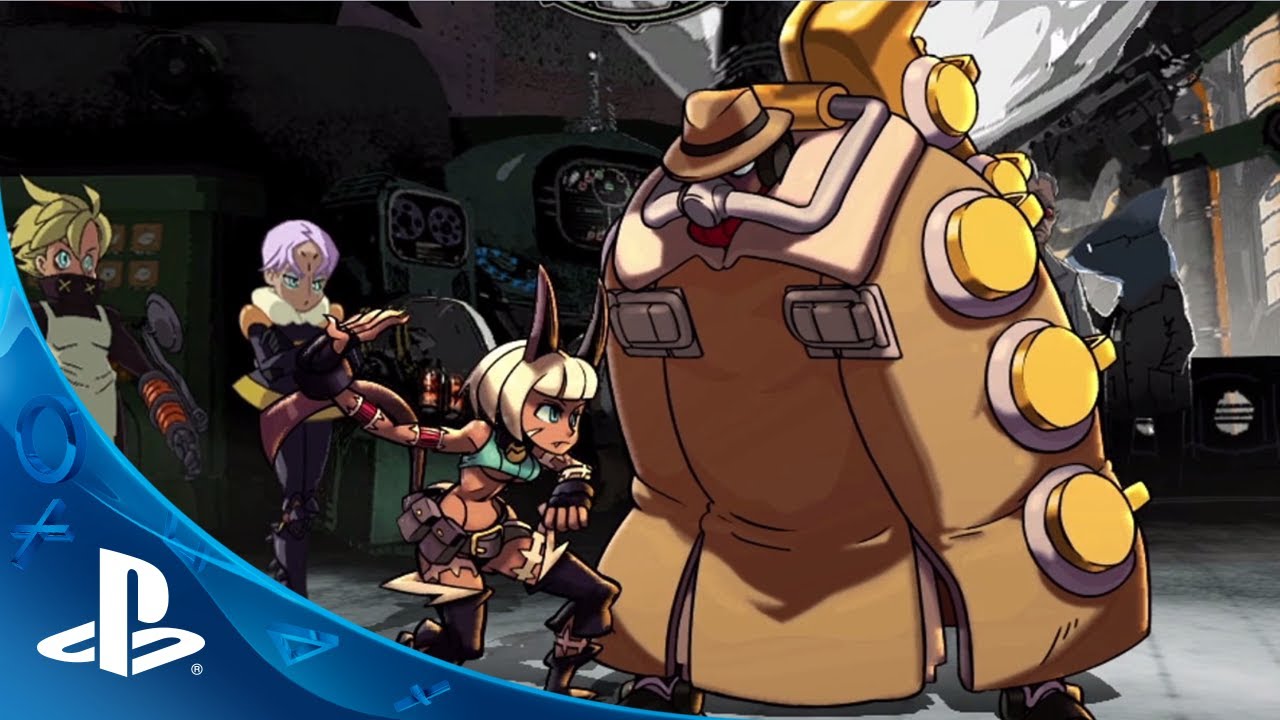 Once a regular beat cop known as Ben Birdland, he fell flat when he got on the wrong side of New Meridian’s corrupt police force. Birdland was broken and bent out of shape by his former colleagues, but was tuned up by Dr. Avian and ASG Lab 8. Now he is armed with a full ensemble of pneumatic weaponry, transforming him into the full fortissimo instrument of justice: “Big Band.”

Thanks to the incredible support of Skullgirls’ fans, Big Band is the second of 5 additional characters funded by Lab Zero’s Indiegogo campaign to be added to Skullgirls Encore. Big Band is Skullgirls’s first male character, and lives up to his name with unique gameplay mechanics that take advantage of his tremendous size and musical motif.

Big Band’s a high risk / high reward sort of character – he has a versatile and powerful moveset for just about any situation, but many of his attacks will leave you vulnerable if you miss or misjudge your opponent.

Big Band’s “Bagpipe Blues” taunt actually powers up two of his supers: Super-Sonic Jazz and Tympany Drive. So if you can end a combo and squeeze in a taunt while your opponent is knocked down, the next time you hit could lead into some really huge damage.

Big Band is also the only member of the Skullgirls Encore cast who can parry incoming attacks. He’ll still take a little damage when parrying, but it will give you the opportunity to retaliate against your opponent with a special move or combo.

Of course, Big Band’s also great on a team. He has a number of powerful options for Ensemble Attacks, and one particularly great Blockbuster Attack to use in concert with his comrades in arms.

Finally, he has a Blockbuster attack that allows him to play a custom trumpet solo, which some people have used to create some great videos from the PC beta already!

On April Fool’s Day, we revealed a “new” character, Fukua.

Now, character reveals on this most hallowed and despised of internet holidays are hardly new, but… we actually added her to the PC version of the game. The joke was that Fukua wasn’t a joke.

Fukua’s name began as a typo of “Filia,” so she’s been built entirely from repurposed Filia frames. But don’t let this fool you, because she plays completely differently from her artistic forebear.

We let our fans decide if they wanted to keep a “clone” character like Fukua in the game, and the answer was a resounding “Yes!” So since her April Fool’s debut, we’ve been testing her in the PC beta, tuning and improving her, and preparing her for primetime.

So in the coming weeks, PS3 Skullgirls Encore players can expect another update, which will add Fukua to the game, completely free!

The next free DLC character coming to Skullgirls Encore is Eliza, a blood-manipulating, Egyptian-themed lounge singer with a dark secret. While no Skullgirls character lacks for ambition, Eliza may be our most ambitious yet.

Eliza’s concept is that she is a “mummy of flesh” – in place of a skeleton, she hosts a Parasite named Sekhmet, who can even leap out of her body and fight in her stead.

Eliza’s blood control powers lead to some really creative attacks, with blood hippos erupting from the ground to sanguine wings carrying her into the air. Eliza’s attacks and animations are brimming with references to Egyptian mythology, such as her summonable bodyguards, Albus and Horace, who are based on the Egyptian gods Anubis and Horus.

Eliza is still in pre-production, but these rough animations should give you a sense of what you can expect. She’s going to be something special.

Finally, here’s a look at Eliza’s bathhouse, one of the new stages coming in her update.

So there you have it: Skullgirls’ cast grows again next week with Big Band, completely free! And a few weeks after that, we’ll be adding our April Fool’s character, Fukua, as well!

And don’t forget: the previous DLC character, Squigly, is free until May 6th!

With two free characters currently out now and more on the way, now is a great time to join the Skullgirls community!