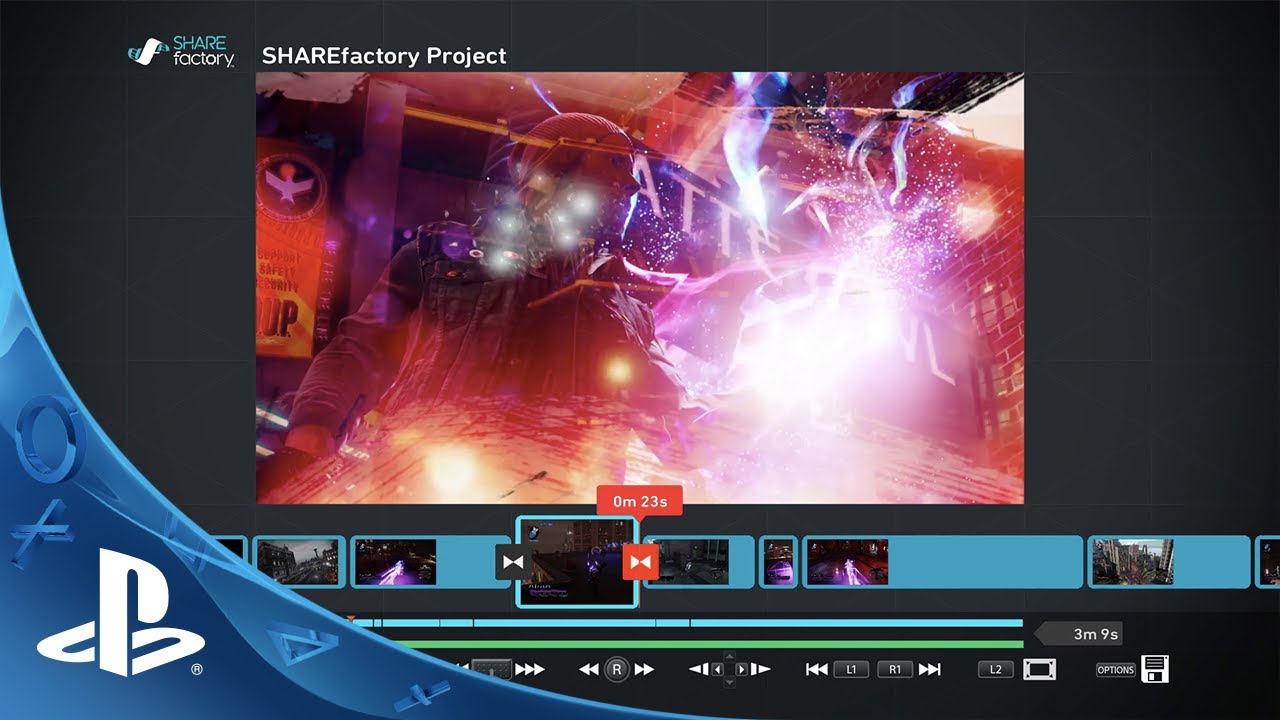 As we mentioned last month during GDC, we’ll be releasing a major system software update for PS4 that will add some exciting new features that many of you have been asking for. Today, I’m pleased to announce a few of those features from PS4 system software update (v1.70) will be available soon, including features that were incorporated as a result of your great feedback. This will be a significant update, and today we’re excited to bring you a sneak peek of just a few things you can look forward to.

The 1.70 update will enable SHAREfactory, our new rich video editor app for PS4 that makes it easy for you to customize your gameplay videos:

With SHAREfactory, you can now easily combine your captured video clips for editing, personalize them with special effects using filters, transitions, and themes, as well as share them with your friends and social networks. SHAREfactory also allows you to personalize your videos by adding text, stickers, and a set of included audio tracks, as well as video commentary with picture-in-picture capability with PlayStation Camera. It also allows you to import your original music to add to the custom soundtrack for your video.

Once you’re done with your masterpiece, you can easily share your SHAREfactory videos to Facebook, or export them to an external USB storage device to upload them elsewhere, another new feature coming as part of the 1.70 system software update. Other PS4 SHARE enhancements include the ability to change the recording time of your gameplay to shorter increments, the ability to change who you share your clips with on the SHARE screen, and the removal of default saves for screenshots and video clips. In addition to these SHARE enhancements, the 1.70 update will allow you switch off HDCP, enabling you to capture video directly from your HDMI output so you can record and share longer clips of your gameplay sessions — a feature I know many of you have been waiting for. We are excited to see what the PlayStation Nation does with these new social features, and cannot wait to get them into your hands!

Play as Soon as the Game is Released

Providing you with immediate access to your games is a priority designed into PS4, and something we will always strive to make better. We’ve had a great response from PS4 fans about the Play as You Download feature, the snappy load times when launching and playing games, and the general speed and responsiveness of the UI. The 1.70 update adds features to build on this idea and make it faster to play the games you pre-order with an auto pre-download capability, which allows you to pre-download your select pre-ordered game up to several days prior to release. If you have the auto-download feature enabled, it will automatically pre-download your pre-ordered game so you can play as soon as the game is unlocked on release day.

As I mentioned earlier, some of these features were a direct result of the great feedback we’ve been getting from you, our dedicated gamer community. We enjoy listening to your comments, and encourage you to continue sharing your thoughts with us. And this is just the beginning. We’ve got a lot more coming in PS4 system software update v1.70 and beyond. The PS4 experience will constantly evolve, and new innovative ideas can come from anywhere to ensure the platform continues to deliver the best in gaming and entertainment every time you turn it on.

We’ll have more information to share about new upcoming features for this major system software update as the release approaches, so stay tuned!