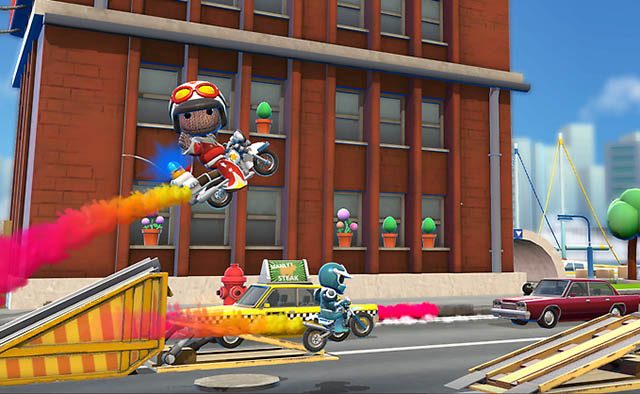 I’m Alex! I work with Sean and the gang at Hello Games. We made Joe Danger, the super-colorful, super-challenging racey platformy series starring a fat little stuntman! People have seemed to like it loads, calling it all kinds of nice things like “astounding” (Official PlayStation Magazine) and “perfect” (Game Informer).

So, you might remember that we’re bringing Joe Danger to PS Vita, and I’m here to tell you that we’re nearly finished! Also, I wanted to tell you some super special news.

So first up, both of our big-console games, Joe Danger and its sequel, Joe Danger 2: The Movie, are running on PS Vita at a smooth-as-butter 60 frames a second, looking clean as you like, and they play so, so nicely in your hands. 60FPS has always been so important to us, because that’s how the games we grew up with ran. So it’s fantastic that Vita can make it happen, especially since it totally looks just as good as the PS3 version. We’re pushing about 400k polys a frame, which is pretty amazing. It loads real fast too. :)

You won’t believe the work that’s gone into making this happen – our friends at Four Door Lemon have done an amazing job squeezing Danger into such a small form factor. We’ve always prided ourselves on our games running perfectly, and we’re so happy that Vita totally lives up to it.

So what will you get with the two games? Let’s talk numbers. Joe Danger features 84 levels, including the Director’s Cut and Laboratory stages, and 25 characters to play as. Joe Danger 2 features 85 levels — including 15 from the Undead Movie Pack we originally released as DLC for the PS3 version — and a whopping 35 playable characters. Seriously, there are dozens of hours’ play in these two releases. It takes our tester, Gareth, nearly three solid days to play through them both. Honestly, this makes him really happy.

We’ve also brought loads of improvements we made in Joe Danger 2 to the original, so both games automatically download ghosts to race against, plus they have online leaderboards and there’s a full complement of Trophies to collect. We wanted these games to be the best versions you can get.

“Alex!” you’re potentially shouting. “I’m stoked to hear this, even if it’s little more than I’d expect of Joe Danger. But there’s one more thing I need to know about. The original games somehow use pretty much every button on a DualShock, so how the heck do you play it on Vita?”

A fine question! We’ve spent a long time tweaking the controls to feel great on Vita, and we think you’ll like the results because they’re really simple! First, we’ve added touch controls for the menus and the Editor mode! This makes the games really easy to navigate. And in play, the only differences are that Circle now tricks as well as punches, while Triangle is a second trick button. The bottom line is that it feels so natural; we’ve been racking up some crazy scores already!

OK, so that’s the main course. Now onto the pudding: that special news. Following a little pub chat with our friends at Media Molecule (and then some rash late night promises) we’re really excited to announce that they’ve have helped us to put three new characters in Joe Danger 2!

You’ll be able to play as Tearaway’s Atoi and Iota (Tearaway is a completely lovely game that everyone should play, btw).

And there’s some guy called Sackboy, too? Maybe you know about him.

They fit so nicely in Joe’s colourful world. Sackboy is in our game! Sackboy! It’s so good. Thanks, Media Molecule! Hey, maybe Joe can take a holiday in LittleBigPlanet sometime?

So that’s us. We’ll be following up with release dates really soon, but for more news on all things Hello Games and Joe Danger, why not follow us on Twitter and Facebook, and maybe come visit our website! Thanks so much for reading!