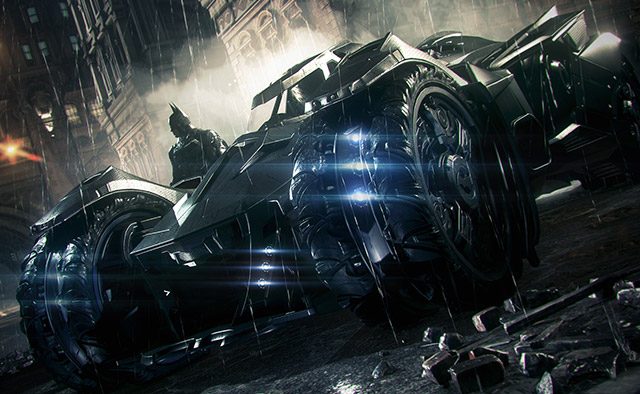 I’ve always said that working on a Batman game is a huge privilege for us. Even though we have been working on Batman for over seven years, we’ve never lost sight of the fact that we are the current custodians of a very special universe.

So it was with great excitement, and not a small amount of trepidation, that we decided to add the fully playable Batmobile into the Arkhamverse, knowing that it would disrupt all of our existing systems and bring with it a huge amount of pressure to deliver on expectations.

I guess this is what excited me most about integrating this very special vehicle. Taking on challenges which don’t have an easy answer is where the best innovations come, because you are forced to do the unexpected. As it was with taking on a character that cannot kill and is powerful but vulnerable, so it is with taking on a car that is (in most right-minded people’s heads) the single greatest vehicle ever.

Integrating the Batmobile married up with our design philosophy at Rocksteady: to focus on features that improve the very core of the game, and hence continually refresh the experience.

Anyway, enough waffle. I thought I’d share three of my favorite features of the Batman: Arkham Knight Batmobile, and how we are hoping this helps to deliver a unique experience:

When playing Arkham Knight, one of the phrases we use in the office repeatedly is whether that is the “Batman experience.” What I mean by that is simply, “Do I feel like Batman performing that action?” (Can you believe I get paid for this level of wisdom?)

When driving the Batmobile through the streets of Gotham, it quickly became apparent to us that there was a paradox between creating a populated* next-gen city full of detail, but at the same time avoiding the player getting stuck or having to weave their way through all of this detail just to navigate around. We’ve all played open world games where you get stuck on odd bits of road debris, but we were adding an unprecedented level of detail, and that meant more objects to get stuck on or avoid, which wasn’t the “Batman experience.”

Therefore, we made the decision early in development that to truly feel the power of the Batmobile, this car needed to be unstoppable. It changed the way we designed and built the game from that point forward. Nothing should stop the Batmobile. If you want to stick to an open road then that is your choice, but if you want to take a shortcut through a pillar, wall or statue then that’s fine too!

I’ve been asked a few times: why this game is only possible on next-gen systems? This level of destructibility in an open world city is one of the key reasons.

We are only going to add the Batmobile if we can do it right, and making it unstoppable was a key requirement in doing that.

* To pick up on the population point, I just wanted to clarify that while the city is evacuated, it is still fully populated. The various gangs have taken over the streets. Gotham is in the middle of a full scale criminal occupation.

This move typifies our “man and machine” strategy perhaps better than any other. We never wanted to create the Batmobile mechanics in isolation from the Batman gameplay. It is essential to us that the two dovetail together. Our goal was to make this something that felt like it was always part of the core experience; that the Arkhamverse was always designed with this in mind.

Combining the gliding and grappling was a key feature of Arkham City. The grapple boost in particular, once mastered, gave you the unique feeling of being Batman gliding above your city. The eject into glide takes this on to the next level, by launching Batman up into the air, but taking all of your forward momentum into the glide, allowing you to travel much further and faster than ever before.

If there’s a feature that is responsible for more lost development than any other, this is probably it! I’ve lost countless hours ejecting and gliding around the city.

It is critical that the Batmobile is never a burden on the player. This must be something that contributes positively to the experience in every way. This also needs to be a vehicle that you could call on at any time you are on the streets of Gotham. So we have a button assigned to do just that. With a single press of L1, wherever you are, your Batmobile will skid around the corner at high speed and Batman will jump straight in.

If you’re in the middle of a fight and getting outmaneuvered, call in your car for instant protection. If you’re gliding, or on top of a building, and want to transfer into the Batmobile, just look down at the road and press the Batmobile button and the car will be there waiting for you. It is never more than a button press away.

Combining the Batman and Batmobile gameplay in a seamless way was a key part of the design goal for the game, because this isn’t just a normal person jumping into any old car on the street. This is the Batman and this is his Batmobile. They have a unique relationship, and the gameplay systems have to be designed to emphasise this bond.

Finally, a quick word on the look of the vehicle. It can be easy to underestimate how much time it takes to create a new version of something as iconic as the Batmobile. This was a daunting part of taking on the Batmobile challenge — if it’s wrong, it just feels wrong, and everyone knows it.

The Arkham Knight, a new character created in conjunction with DC Comics.

While we loved the design of the Batmobile in Batman: Arkham Asylum (its Hot Wheels model has a special place in my Batman collection!), what became immediately apparent was that it wasn’t especially practical for getting around Gotham. The clearance of the wheels and suspension meant that this dragster design would struggle on uneven ground, and it was important to us that the city had dynamic terrain.

“If it’s wrong, everyone knows it.”

So with that design rejected, we actually started with ideas that were driven by a purely pragmatic approach. After a number of iterations, we felt that this never captured the spirit of Batman. While he is not someone who ever shows off for the sake of it, it is very important that you know when Batman is around. He doesn’t build a distinctive vehicle just because he likes to drive a flash car. He drives a unique vehicle for the same reason he wears his cape and cowl – it’s part of his persona of intimidation.

This led us to the design we have now, which I think is a great balance between a practical vehicle and one that is undeniably, uniquely a Batmobile. It doesn’t matter if you know nothing about the game, you know that when you see this car, it can only be Batman’s car. I think Dave Hego (Art Director) and his team did a great job in realizing this vision.

Anyway, there’s lots more to come. For now I hope that gives you a small taste of why we’re so excited to have added the Batmobile to the Arkhamverse, and how we feel this refreshes and expands the whole experience.