What is N++? An Intro to the PS4 Action-Platformer 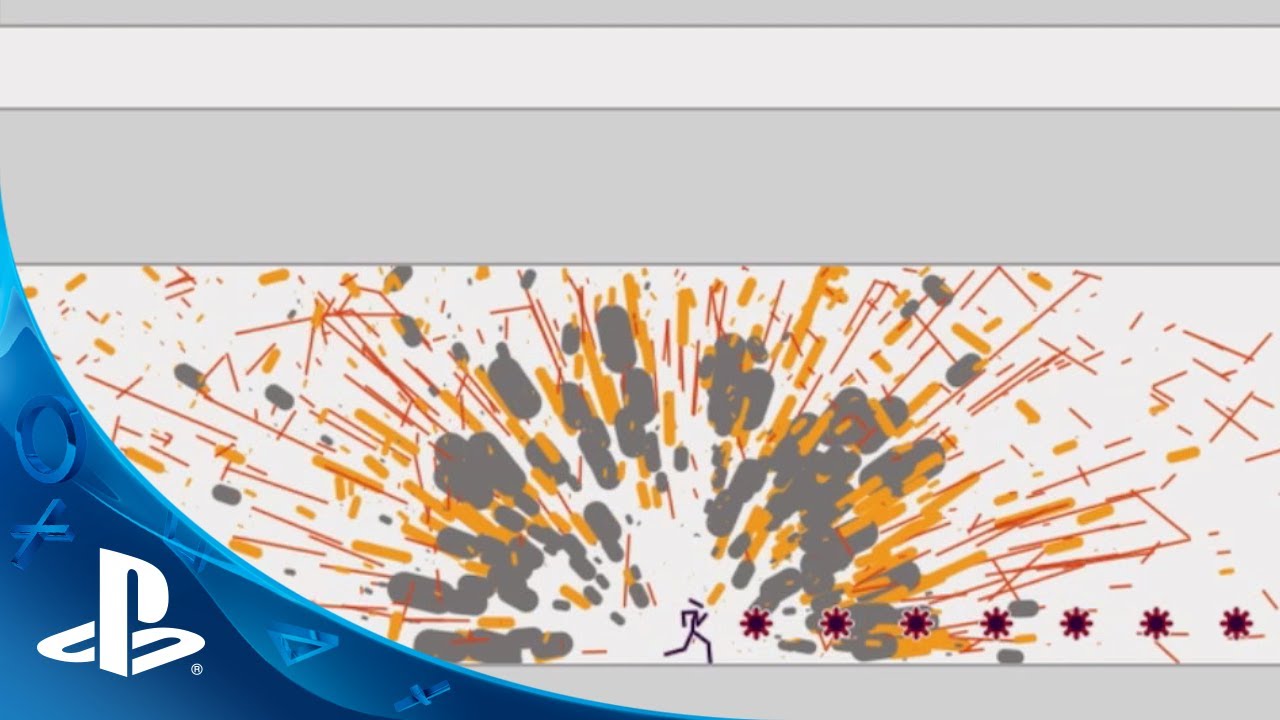 Hi everyone! This is Metanet, back with another update. Since our last post, we’ve been focused on getting N++ into an alpha state, which has mostly involved adding all of the particle effects, sounds, and animation that help to really bring things to life. While the main core of the game has been working for a while, it’s nice to finally see things with more bells and whistles!

We’ve also been making and arranging levels — a continuous process that will go on right up until the game ships — as well as doing some playtesting. People are responding well to the new levels so far, although we may have made some of them a bit too hard. ;)

The good news is: we now have a playable demo which we’ll be showing soon at BitSummit and Game Developers Conference. If you’ll be at either of those events, please stop by and check it out!

For those of you who don’t really know what N++ is, today we’re going to delve further into one simple question: “What is N++?”

The genre that best describes N++ is without a doubt “platformer.” You play as a tiny ninja who runs and jumps around a 2D side-view world full of interactive objects and deadly enemies, collecting gold and trying to make it safely to the next level. It’s fast-paced, tense and exciting.

However, N++ has a unique feel which distinguishes it from other platformers: the ninja moves with an exaggerated sense of inertia and momentum. Gradually learning how to control the ninja — developing an intuition for how it will react and how to harness its momentum — is one of the most challenging and rewarding aspects of the game. Once mastered, the ninja is capable of some fantastically agile acrobatics. There’s nothing like the thrill of pulling off a difficult maneuver to soar untouched through a swarm of enemies.

The levels in N++ are also a bit different from traditional platformer fare: instead of just boxy square tiles, there are many angled surfaces and smooth curves. This is no accident — the ninja’s momentum-based movement means that hills and slopes can be used as ramps to launch off of, and learning how to use the environment to your advantage is a key part of playing the game.

The ninja can jump up walls almost as easily as running along the ground, which opens things up vertically and leads to a very dynamic and diverse range of levels. Playing N++ is kind of like what we imagine parkour / freerunning to be like – although much less physically demanding!

Each level is contained within a single 16:9 screen, which makes the game feel a bit like a puzzle-platformer – the question of each level is: can you figure out a safe route to the exit? More importantly, can you actually perform/execute this route? N++ is very fast-paced, and there aren’t many places where you can rest and plan out a route – the enemies just keep on coming, and they can’t be stopped, so you need to be able to think on your feet.

In order to beat a level, you have to first touch a switch which opens the exit, then get to the exit alive. Sometimes the switch is behind locked doors, and it’s usually guarded by several inadvertently homicidal robots. Occasionally the path to the switch is long, so you’ll need to collect gold along the way to add to your timer — the clock is always ticking, and running out of time means game over.

In any case, because the level is visible all at once, you can take some time to mentally prepare before the level starts. Thinking about how to traverse the stage and working out where you need to go to activate the switch and make it to the exit in one piece is essential.

Though there are hundreds of them, each N++ level explores a different feeling, puzzle, or set of skills. Some are claustrophobic, others are vast and spacious; some are relatively short and easy, others are long and challenging. You’ll need to be flexible and creative to get through all of them!

Another unique aspect of N++ is its graphical style: it’s made up of very smooth, very clean anti-aliased vector shapes. We have put a lot of effort into making things as beautiful as possible, enlisting a minimalist aesthetic so the levels aren’t cluttered up with distracting detail — every graphic and bit of movement on the screen is significant. Structuring the graphics this way lets you as a player quickly “read” the state of the world with a minimum of effort, allowing you to focus on controlling the ninja rather than parsing a lot of extraneous visual information. Streamlining the visual experience lets us make the levels more complex and dynamic without overwhelming you or making deaths feel unfair.

The vector graphics also enhance the smoothness of motion, so you can feel the ninja’s movement across fractions of a pixel. N++ is a game of precision, and when you’re trying to guide your ninja safely through a dangerous level, every pixel counts! As you attempt to solve each level, you’ll probably die a lot – but restarting the level is almost instantaneous, and you can retry as many times as you’d like.

The adjective which best describes N++ is probably a tie between “difficult” and “fun”; it can be quite challenging to master, but this creates a profound sense of accomplishment as you learn and develop your ninja skills. Levels which seem impossible at first become easy as you get a feel for playing, and possibilities open up as you learn new techniques and strategies. By the end of the game, you’ll be flying through densely populated worlds with a series of perfectly executed moves… sometimes right into a mine. ;)

N++ will also feature several multiplayer modes which let you cooperate or compete with your friends. Co-op sees two ninjas helping each other to reach the exit alive; these levels tend to be fairly devious and often involve traps and tricks which players must figure out together. Race mode is, as the name suggests, a 4-player race to the exit. The rules encourage some risk/reward excitement, and you’ll have to decide whether it’s better to just bolt for the exit, or grab some gold on the way.

We’re also introducing a new Deathmatch mode, inspired by one of our favourite classic freeware games, Jump n Bump (you can try it here, best with four players). This mode will feature arena-like levels where ninjas battle to survive. We’ll talk more about the multiplayer modes in a later post, but hopefully this is enough to pique your curiosity for now!

We’re still in the process of making levels, but so far it looks like there will be over 1,000 new levels in the game, which will all have global and friend leaderboards. There’s also a level editor, so should you ever get bored of the built-in levels, you can create your own and share them globally (these will have leaderboards as well).

We have lots of fancy surprises to layer on top of the stylish graphics and fabulous particle effects you can see in the screenshots – and we’ll be throwing in a handful of our patented “fun-lockables” as well. Hopefully this gives you a better idea of what you can look forward to in N++. We’ll be back with more soon. Until then, watch the teaser trailer at the top of this post to see N++ in motion for the first time. Thanks for reading!