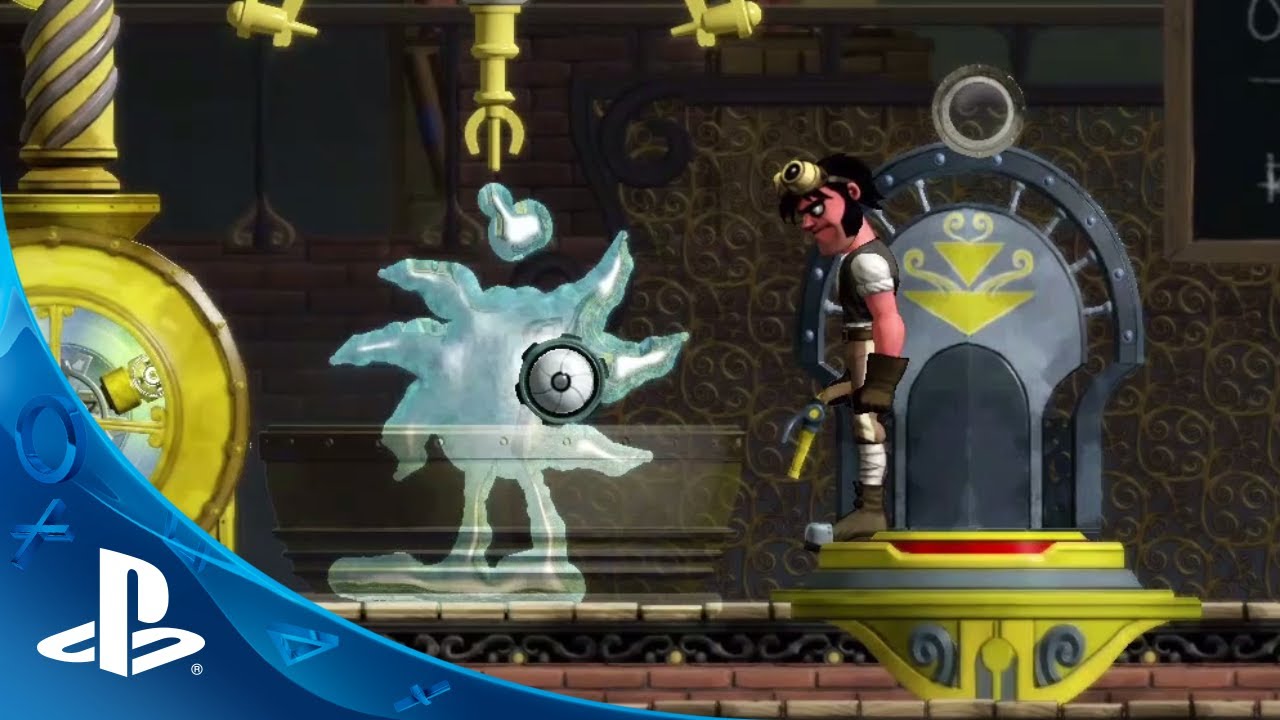 Vessel will be coming to console exclusively for PS3 on March 11th!

To celebrate this launch, we’ve created a limited edition of Vessel Turbines, a desk toy that gives you your very own “Fluro” in a bottle. Each bottle contains a large blob of Ferrofluid, a magnetic liquid that comes to life when you apply a magnet — just like the creatures of Vessel. You can buy it on our website and get a key for Vessel on PS3.

In the game Vessel, you take the role of inventor Arkwright who has created living machines made out of liquid (called “Fluros”) that are wreaking havoc around the world. You set out to solve the Fluro problem and unravel the mystery of what they’re becoming.

Vessel takes a unique approach in gaming by creating all the creatures out of liquid. Their bodies are composed of thousands of physically simulated fluid particles. This means that they’re capable of things that few other creatures in a video game are, like melting, reforming into new shapes, flowing through barriers, regrowing lost limbs, chemically combining multiple fluid types, and much more.

All the puzzles in Vessel are based on interactions with this living liquid. Exploring and understanding how to bring liquid to life will lead to success. You have the ability to create and destroy these creatures, and the story revolves around their inventor as he sees them evolve and become lifeforms of their own.

We’ve spent a lot of time optimizing the game to run the liquid simulation fluidly (pun intended) on PS3, and we’re really happy with the results. We’ve made full use of the PS3 hardware, using the distributed power of the SPUs and internal hardware to process huge amounts of liquid (both living and non-living) per frame.

We’ve partnered with electronica artist Jon Hopkins (composer of the Monsters soundtrack, and renowned for his work with Brian Eno, Imogen Heap, and Coldplay), and we’ve integrated his tracks deep into the gameplay. As you begin to unlock a puzzle, the pieces of the soundtrack will unfold and layer on top of each other, really giving the feeling of bringing the world back to life. Jon’s brand of electronica fits the dark and mysterious mood of Vessel perfectly, and we’re really excited to present it in this form.

Vessel is built on an optimized liquid simulation featuring flowing water, scalding lava and steam, reactant chemicals, glowing goo, the mysterious “protoplasm,” and more. Each liquid has unique properties and mixes with other liquids for dramatic effects. When the player creates Fluro by placing a seed and giving it liquid of any type, the creature will retain the properties of the liquid they’re made of, giving them the ability to melt, reform, absorb, explode, and more.

Users solve puzzles by combining the unique behaviors of each creature with the fluid they’re created from. Every aspect of the world is physically simulated, and all puzzles are based in the liquid simulation. Drop a Drinker Fluro and lure him by spraying goo. Create a Dark Fluro and chase him with light. Liquid and physics are not an aesthetic in Vessel, but the foundation of gameplay. To solve puzzles, you have to think fluidly about life — you have the power to bring to life (and destroy) any liquid, how can you use that to achieve your goals?

Vessel features more than 10 hours of content across multiple worlds, many types of liquids with unique properties, and many ways to bring them to life. Our focus as a studio is to use the power of modern hardware like PS3 to create new kinds of gameplay, not just better graphics.

With our liquid simulation as a foundation for all the characters and puzzles in Vessel, we’re able to make a really unique experience not yet explored in video games.