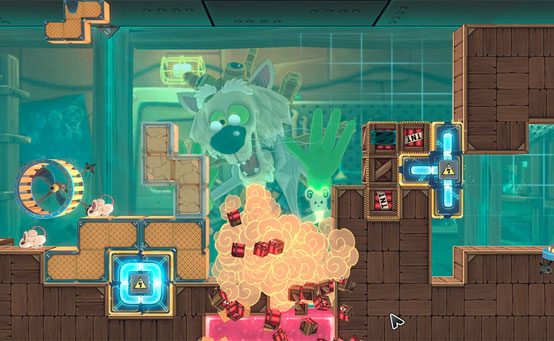 Hey everyone, Rob from Curve here! It seems like only a few weeks ago I was here talking about our Mega bundle of 2013 games. This week we’re very happy to announce something brand new: an indie puzzle game called MouseCraft.

MouseCraft takes some of the most recognizable elements of classic puzzle games and combines them to create something that’s completely new and great fun to play, especially on a portable device like PS Vita. The basic gameplay is very simple: Your goal is to lead a group of mice through a machine to find the cheese at the other end of the level.

You don’t control the mice directly however, but instead control their environment through the use of many different types of classic ‘Tetromino’ blocks that can be dropped onto the level. Imagine the careful strategy and planning of a game like Lemmings with the blocks and fast-paced decision making of Tetris, and you’ve got an idea of how MouseCraft works.

There are over 50 levels in the campaign mode, and as you play the path and methods of getting to the exits becomes more and more complicated, introduce different blocks that can used to avoid obstacles, create new paths and defeat enemies. On top of that, the game also includes leaderboards, collectables, a ranking system and a fully-featured level editor available during launch.

MouseCraft is our first game that Curve are releasing on PlayStation at the exact same time as the PC release, something we hope to be doing more and more in the future. It’s also our first PS Vita game of 2014, so it’s an exciting title for us! The Vita version should available in early May, and we’re also planning a PlayStation 4 version of the game to be released this summer.

We’ll be talking more about the gameplay and the level-editor in the future, but in meantime I’d be happy to try and answer any gameplay questions in the comments!