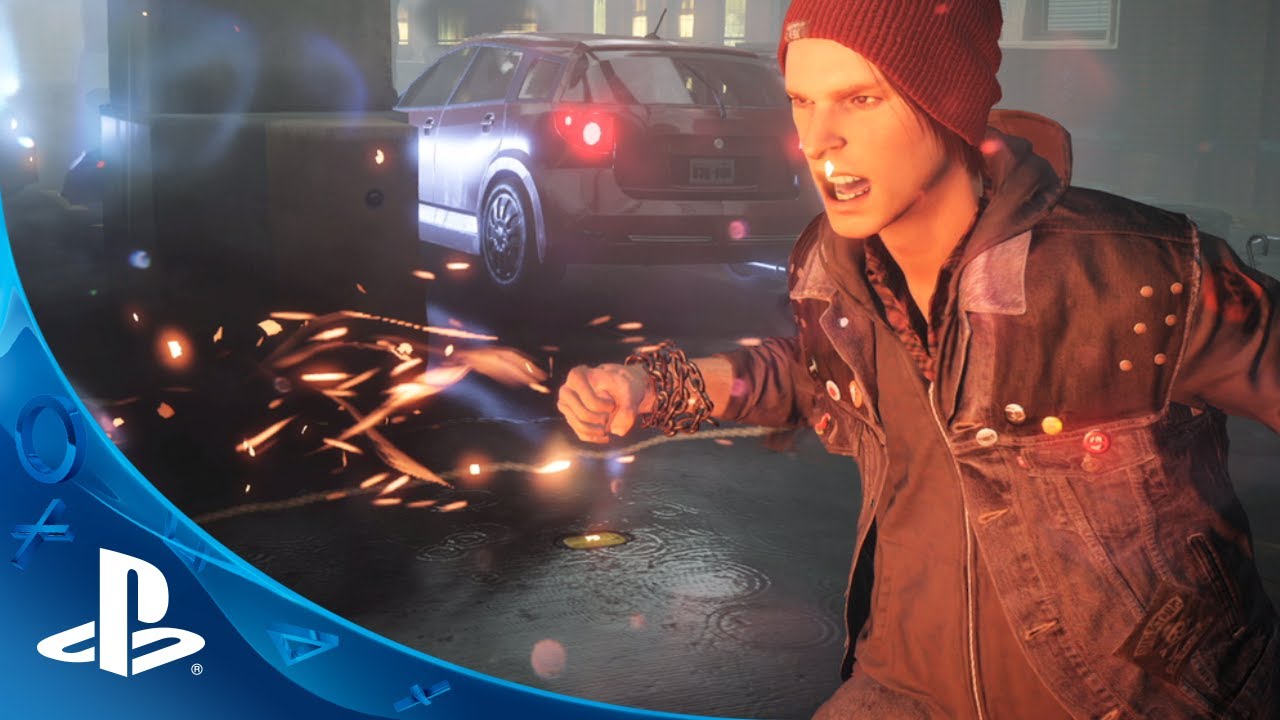 Delsin Rowe strolls down a shadowy length of docks with ample confidence. Caches of illegal drugs have been hidden among the houseboats moored there, which is a disagreeable notion to our super-powered, rough-around-the-edges hero.

But with eye-searing neon and seething smoke at his disposal, Delsin has little to fear from the drug peddlers peppering him with gunfire. Bullets ricochet off the flashing neon light around his head as he flinches — they’re more an annoyance than a danger. As he leaps into the air to greet his enemies, powers flaring to life, he can destroy them or subdue them. And that’s up to the player.

Choice has always played a vital role in the inFAMOUS series, and inFAMOUS Second Son is no exception. Amidst all the open-world action that developer Sucker Punch has set in its own Seattle, Delsin can enter combat as a careful hero or a ruthless force. These methods of play not only affect how each battle scene is approached, but how Delsin’s powers manifest themselves.

Smoke and neon, the two powers Sucker Punch has revealed so far, can cater to either play style. Players unconcerned with the lives of civilians can wreak havoc without fear, weaponizing the environment to destroy enemy APCs, or plunging into the ground to unleash devastating shockwaves that don’t differentiate between enemy DUP agents and innocent bystanders.

But Second Son also empowers heroic players in this digital playground. Players can modify Delsin’s basic neon blast with a slow-motion aim that highlights an enemy’s leg, tangling them in glowing binds. Subdued, they’re no longer a threat to Delsin, but they needn’t lose their lives to his super-human barrage.

When Delsin gets in close to stunned enemies, small prompts on screen allow players to choose between executing and subduing their targets. With one button press, Delsin can vaporize an enemy soldier in a flash of glittering light, or leave him struggling on the ground with a battered ego.

Like past inFAMOUS games, these choices dramatically alter the way players perceive each scene. Crowded tunnels teeming with civilians may be a challenging test of patience and skill, or a gleeful shooting gallery. Regardless of a player’s preference, Delsin’s powers encourage both styles of play. Even traversal skills like the smoke-fueled dash can be turned into a lethal attack or an exercise in restraint.

But the choices presented to Delsin don’t all erupt in the heat of combat. When he catches up with the hot-headed Conduit known as Fetch, Delsin can take her under his wing and redeem her, or encourage her violent tendencies and corrupt her. These choices not only alter the course of the narrative, but change the mission sets presented to players afterwards.

With so much power at his fingertips, Delsin can save a lot of lives in inFAMOUS Second Son… or he can leave a long trail of bodies. Ultimately, that choice is up to the player when Second Son launches for PS4 on March 21st.