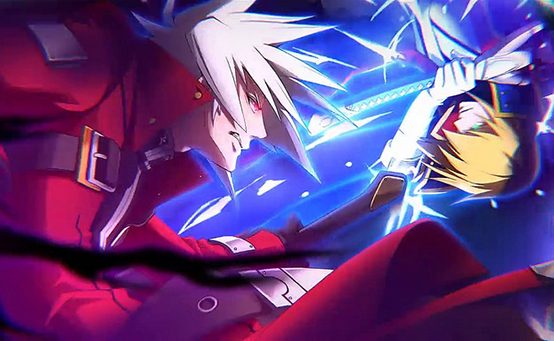 Greetings, and welcome to another missive from the mighty Aksys Citadel. As the North American launch of BlazBlue: Chrono Phantasma draws ever closer, we thought it’d be good idea to talk a little bit about the game — especially all the new features and characters, not to mention the special edition and all of its various doodads. So without further ado, let’s BlazBlue!

First of all, there are a few system changes in Chrono Phantasma that set it apart from previous versions of the game. One of the most obvious additions is the Overdrive ability. By initiating Overdrive, you’ll be able to amplify a character’s overall skills and abilities for a set period of time. When Overdrive is active, the stage will go dark, letting you know it’s time to get down to business. When used to its fullest, the Overdrive system will allow a player to turn the tide of battle and snatch victory from the jaws of defeat!

Another big change is to the Network/Online portion of the game. The number of options available to the online warrior is, to be incredibly hyperbolic, mindboggling. In addition to the previous nifty options (customizable lobbies that let players set the number of participants, skill level, etc.), players can now chat with each other publicly (or feud privately) and play through the various single-player options while waiting for online challengers via the all-new Entry mode.

As for the new characters, there are seven in total, each with their own unique play styles, challenge modes, and roles in the ever-expanding BlazBlue mythos. Amane Nishiki, Bullet, Azrael, Izayoi, Yuuki Terumi, Kagura Mutsuki, and Kokonoe join the returning cast of characters, bringing the roster count up to an awe-inspiring twenty six!

And finally, let’s not forget the special edition. In addition to the game (which is a given with any special edition… hopefully), those fortunate enough to get this wondrous, deluxe release will also get a nifty art book, a CD of sweet, sweet BlazBlue music, a handy-dandy move guide, and an informative blu-ray chock full of developer interviews, an episode of Bururaji H, and the first episode of Alter Memory! Also included is a Nendoroid petite figure of everyone’s favorite caustically sarcastic, eternally bitter loli-goth immortal vampire, Rachel Alucard.

Oh yes, and all special editions AND first-run copies of BlazBlue: Chrono Phantasma will come with an insert containing a DLC code for everyone’s favorite maniacal troll, Yuuki Terumi!

Whelp, as it seems I’m out of time and room (and exclamation points), I think I’ll just end things here for now. Thanks for reading, and if you have any questions, comments, or random thoughts please poke at us on Twitter at @aksysgames or on Facebook.

Oh, I’m back. Miss me? Of course you did. After waxing poetic about the PS3 version of BlazBlue: Chrono Phantasma, I was informed that we’re also going to be releasing the PS Vita version as well, and was “asked” by the powers that be to type a few things about the portable version of our truly awesome 2D fighter. While much of everything I already gushed about holds true in regards to the handheld version, there are a few new bits and bobs we feel you’ll want to know.

All screenshots from the PS3 version.

Just to put your minds (and wallets) at ease, all of the DLC for the game is cross-compatible. So if you bought a color pack or an additional character for the PS3 version, you can also use that content on the Vita as well. Now you can perfect your rage-inducing Kokonoe corner-combos while she’s clad in any number of different color palette options.

Another new, nifty addition is an extra story mode featuring Ragna, Noel, Celica and Kagura as they frolic in the clear blue waves of one of the few beaches not completely annihilated by the Black Beast. Not sure who/what the Black Beast is? Don’t worry, as summaries for the stories of Calamity Trigger and Continuum Shift are included to help you get up to speed on the current events in the BlazBlue universe.

And to wrap things up for now, the ever-popular Abyss mode has been enhanced in a number of weird and wondrous ways! No, really; we think you’ll like what we’ve done, so please be excited!

Anyway, thanks for reading, and if you have any questions, comments, or random thoughts please let us know.