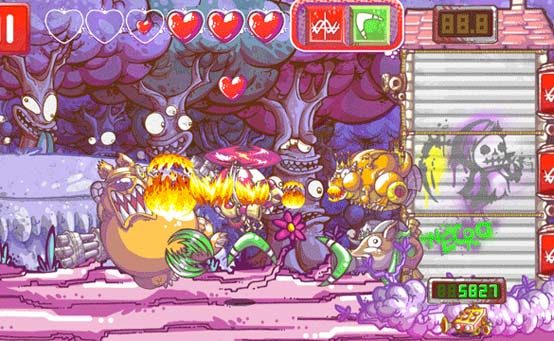 Hey PlayStation community, we are back after an exciting CES last week. PlayStation Mobile was on the show floor in the Play area of the Sony booth. We showed games off on a shiny new Xperia Z1S, which is launching soon on T-Mobile here in the US. We also allowed mobile gamers to experience what having a portable and wearable home theatre was like, by hooking up the HMZ-T3W to the Z1S.

This week is the last week of our Festive Giveaway promotion that began over Thanksgiving. We are sending this promotion out with a bang by giving you Monster Hotel and Quiet Please.

We have some amazing games launching this week, so be sure to check them out. This week, we have Gun House and Crystal Ice launching. We also have updates to Chromatic Aberration and Shooting Star Featured.

Last week, Tiki Rush: Escape from Lava Island launched for PS Mobile. Find out more about the game below.

Monster Hotel is a fast-paced game where you must look after a hotel with a variety of very unusual guests! The inhabitants of Monster Hotel can be a fickle bunch, and keeping them happy is a big challenge. It’s the perfect title to pick up right before Halloween and should do a great job getting you into the mood. XMPTGames is no stranger to PlayStation Mobile either. They launched Penguin Party in April of last year.

After an annoying day at school, you just want some peace and quiet. But everything at home is so noisy! Mr. Peabody is obsessively mowing his lawn, Dad is channel surfing and Mom is yapping on the phone. Your pesky kid brother won’t go to bed, and even your pet kittens are driving you crazy! Explore, interact with your environment and solve puzzles.

Gunhouse is a game about making tiny blocks become bigger blocks so that you can make those bigger blocks become guns and special attacks, so you can attack horrible enemy bad dudes that want to steal your dang orphans. It has things like: turn based combat, kinda! A bunch of guns to upgrade! Old-timey weirdo writing! Three different kinds of skeleton!

Crystal Ice is an addicting action puzzle game with a chilly fresh new take on the familiar matching game formula. In Marathon mode, Crystal Ice Players must clear as many Crystal Clusters as they can before the game grid fills up with the fast dropping Ice Blocks. Additional game modes include Challenge and Puzzle levels where Players can prove their Crystal clearing skills.

Glen Bakie, President of Mercury Interactive, provided some insight as to why they made Tiki Rush for PlayStation Mobile:

Last week we launched our first game for the PlayStation Mobile platform, Tiki Rush. It’s a game that definitely brings out the “wild side” in you. In developing Tiki Rush, our goal was to entertain players with really quirky humour and challenging gameplay that they’d resonate with. We know this formula will have players wanting to play over and over again.

Level design is so important for a game like this. We really took the time to figure out placement of objects and obstacles to get it just right. We believe that when players get into the game and start getting familiar with it, they’ll appreciate the little things like how the jewel patterns are randomized, quirky powerups, mask and outfit customization and the tiki cup bonus game. We were also happy to see the game perform well on multiple platforms, especially moving between touch and button controls on the PS Vita.

We’re partners with an animation studio that focuses on TV. So of course the 2D and 3D artists were super excited to be working on a Playstation ™ Mobile title as a change of pace. There were LOTS of “debates” between the creative and technical teams in terms of how much could be visually packed into the game! In the end, some really creative solutions were developed and we think the results really come across beautifully on screen.