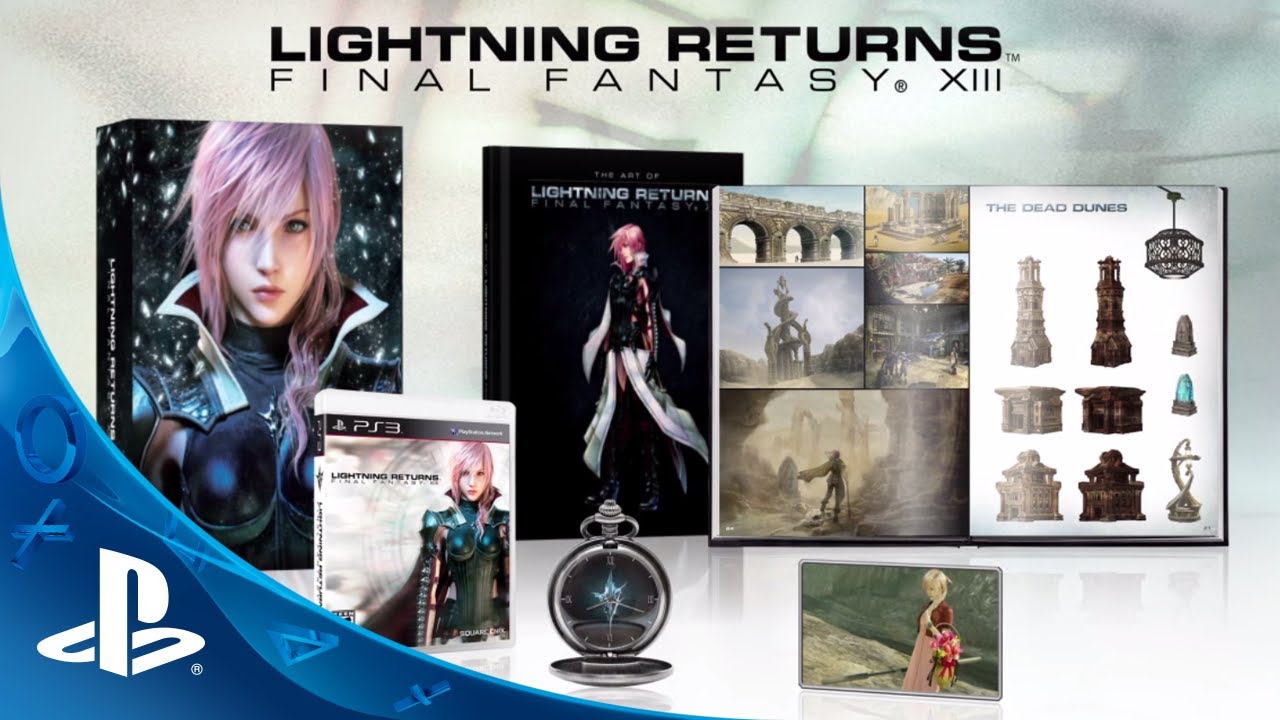 We’re thrilled to announce the Lightning Returns: Final Fantasy XIII Collector’s Edition, which will be available for purchase exclusively through the Square Enix Online Store.

Instead of just throwing together a bunch of cluttered pieces of cardstock, paperweights, or stuff you won’t ever look at again, we spent a lot of time coming up with some things we thought you’d really enjoy. In other words, we wanted to make this Collector’s Edition just that — something you’d actually want to collect.

Collector Box: As a lifelong fan of the Final Fantasy franchise like many of you, I’ve always loved the aesthetics of the Japanese cover art. We don’t want you to feel forced to import the Japanese copy of the game for obscene amounts of money just for the fantastic cover art, so that’s how we came to the decision to choose this specific artwork for the collector box.

80 page Hardcover Art Book: This art book, simply put, is awesome. Everyone is well aware that the Final Fantasy series is known for its iconic art, but we wanted to go above and beyond on this one.

This art book is wrapped in a dust jacket featuring legendary character designer Tetsuya Nomura’s original drawings. Diving into the book itself, the first thing you’ll notice is the foreword by visionary art director Isamu Kamikokuryo. As you flip through the pages, it only gets chock full of more awesomeness, like a retrospective look at the Final Fantasy XIII franchise, more character sketches and renderings, Lightning’s full range of customization, the world of Nova Chrysalia and its architecture, as well as the massive amounts of monsters contained within.

Finally, there are the two full gatefolds that give you an even more introspective look into Lightning Returns. It would have been tragic to force some of these pieces to fit on one page, so instead we spread it across two pages that fold out to reveal even more art.

Silver Embossed Pocket Watch: Lightning Returns revolves around a 13 day countdown doomsday clock — an ever-present challenge that forces you to make game-changing decisions throughout your playthrough. We wanted to give the gift of time back to you in the form of this premium pocket watch.

Aerith Gainsborough ‘Midgar’s Flower Girl’ DLC: For you true Final Fantasy fans, we wanted to make sure you got a DLC code to put Lightning in one of the most recognizable costumes in franchise history.

PS3 Game: And of course, a copy of the game.

The Lightning Returns: Final Fantasy XIII Collector’s Edition will be available exclusively through the Square Enix online store on February 11th, 2014 for $89.99.

Anything else you’d like to know about the Lightning Returns: Final Fantasy XIII Collector’s Edition? Let us know in the comments below!