Hands-on with Dying Light on PS4 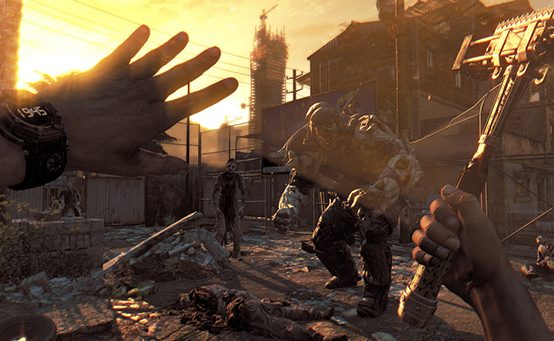 The art of parkour already has ample thrills for any athlete. You certainly don’t need hordes of snarling ghouls nipping at your heels to make it any more exhilarating, but Dying Light blends the two together in a huge world devastated by the undead apocalypse. Designed by the same team that brought Dead Island to the gaming masses, Dying Light is a first-person survival game. It boasts a new combat system and tremendous player freedom in complex environments. It also, as you might expect, includes lots and lots of infected (and ways to kill them, too).

The developers at Techland brought Dying Light to the PS4 launch event here in New York City this week, demonstrating the broad array of tactical options players have to approach any situation in game. Both combat and movement are essential components to the experience — running away from danger is just about as much fun as running straight into it.

Dying Light is set inside the wrecked and ruined city of Harran, a fictional locale with an ancient history. Game Designer Maciej Binkowski likens it to Istanbul, Turkey, as he boots up Dying Light on PS4, passing me the DualShock 4 with an eager smile. There’s a dark beauty to Harran, with buildings that rise and fall like waves, and roads caked with bodies and abandoned cars.

Players can explore huge sections of Harran from a first-person perspective — running, ducking, weaving, and jumping through the debris to find supplies and complete missions. The demo opens in a small street clearing, and Binkowski coaches me through the basics before I sprint towards a supply package that’s just been dropped into Harran’s quarantined limits. I’m warned that these supplies are rare, so other survivors will hungrily hunt them with just as much tenacity.

A scream pulls my attention away from the supply drop and over to an apartment a few stories up. Dying Light presents players with a number of optional events they can chase or ignore, dependant entirely on their preference. I run towards a nearby wall, leap up and over, and climb up to a ledge that gives access to the apartment. Peering inside, I see an infected pounding a closet, its moans mingled with the terrified pleas of the survivor inside.

For the sake of the demonstration, my character has been gifted with a few weapons to dispatch such obstacles, including a hatchet and several hammers of various size. I pull out the hatchet and creep up behind the infected, burying the blade atop its head with a satisfying crunch.

Opening the closet door, the survivor thanks me, then hands over a few items to repay the kindness. Binkowski urges me on, and invites me to try other weapons against the infected wandering the streets below.

Every weapon in Dying Light has a charge attack, and these differing attacks open up plenty of ways to navigate through combat. The larger hammer, for example, can be pulled back and swung in a massive arc which sends the unfortunate infected hit flying backwards. Critical impacts are noted by “x-ray” highlights, which reveal broken bones and splintered skulls caused by successful blows.

Turning a corner around a small house, I stumble upon an infected wearing what appears to be a hazmat suit. Binkowski chuckles, noting that I should try attacking the tank strapped to its back. I leap over a fence and circle around, coming up behind it and denting it with the hammer. Backing up, the infected’s suit ruptures in a rather delightful, hissing explosion. I can’t locate the remains.

Binkowski restarts the demo and takes control, rushing through the city with practiced expertise before making it up to an overpass choked with the undead. A group of human survivors guard the passage, so Binkowski lures them towards the edge and tosses them over. We watch as the body tumbles down to the ground below.

The demo promptly closes with the arrival of a Demolisher — a hulking mass of flesh and muscle. It hurls a wrecked car at Binkowski’s character before the screen cuts to black.

Dying Light is coming to PS4 in 2014. It features four-player cooperative play, voice control (for shouting at infected to distract them), and witty uses of DualShock 4’s light bar and motion sensor — like tilting the controller to the side to check your in-game watch.

Binkowski concludes our meeting with a reminder that the Share button is a huge boon for a sandbox game like Dying Light. Because when you detonate a gas canister and send huge groups of infected flying, well, that’s the kind of moment you just need to share with the internet.