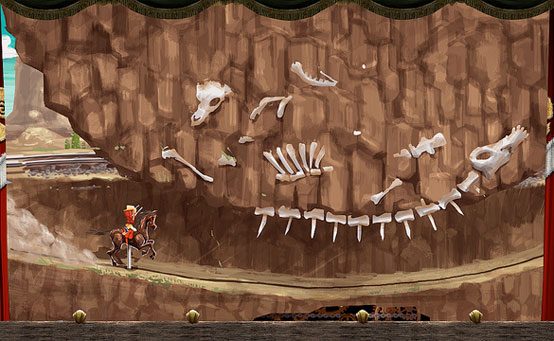 All games are the product of individual creators, and while it’s occasionally hard to see it, all are duly imbued with the personalities of the artists that first breathed life into them. As anyone who’s played it will surely know, this is no more true than it is with PS3 platformer Puppeteer. Japan Studio’s sublime adventure drips with charisma, character and, above all, passion.

With its launch last month now disappearing into the rear view mirror, we stopped by creator Gavin Moore’s Tokyo office recently to find out how such an idiosyncratic and personal project got made, and what it’s like having to let go and hand it over to the game-buying public after three years of hard work.

Read on for some fascinating insight into the creative process, and for an exclusive glimpse at some never-before-seen artwork from the game. Oh, and if you haven’t found the time to play it yet, I urge you to do so! It’s one of the year’s finest. To see more trailers, screens, and, of course, grab a copy for yourself, visit PlayStation.com.

So, after three years of development, Puppeteer is finally on the shelves. What’s your primary emotion right now?

Gavin Moore: Pride. It’s probably one of the only games that I’ve made in 21 years that I’ m not just going to put in a box in the attic. It’s actually going to go into my game collection.

And I’m proud of this team and what they did. It was a very difficult game to get off the ground in the first place. We’re in a market of sequels, and shooters, and the GTAs of this world. It was just refreshing that Sony gave us that chance, and that we actually did it, and we did it in time, and we got it out before PS4 launched!

Is it hard waving goodbye? There must be a Kutaro-shaped void in your life, I’d imagine…

Gavin Moore: It is to an extent. When you make a game, it’s very much like being a parent. You conceive it, you bring it into the world and then, over time, it grows. Then they take on a life of their own as they progress through the development cycle.

About a year ago you could feel it becoming an unruly teenager. It was fighting us and wanted to go its own way. We had to compromise with it and make sure it was working properly. And then it comes of age and you send it out into the world. It’s pride mixed with a smidgeon of sadness.

What was the atmosphere like in the office as the first reviews started to arrive?

Overall, the reviews have been incredibly positive. What’s more interesting to me though are the user reviews. Going on Twitter and searching for Puppeteer and seeing people rave about it, or lurking on message boards.

I thought the little in-jokes and nods to other games were really fun. How did they come about?

Gavin Moore: That actually happened because I was working with PDSG (Product Development Support Group) in the US. They were helping us out doing the demo movies. I went to San Diego to meet them all, and I said “Look, this is my idea of what it should be, but we’re making games, so have some fun, and if you have ideas, put them in.”

That was a shock to them, as they work on the service side of the industry where they have directors telling them “You’re going to do exactly what I say, and nothing more.” So they had a blast.

One guy goes “Gavin, can we put an inFAMOUS reference in there?” And I went “Oh god… Well, we are trying to strive for Monty Python, so let’s do it.” And that opened the flood gates. As soon as I put that in we went back and started writing things into the game.

Now that you have a little distance from the game, is there anything specific that you wish you could change?

Gavin Moore: I might change the difficulty. Make it harder. We could have made the single player game rock hard. Like, frustratingly hard. Old school Ghosts ‘n’ Goblins hard. Or put in some kind of difficulty option in there to allow that. But then again, if you’re not going to get to the end, then there’s no point me making it. That’s a difficult choice to make.

Another thing I didn’t think about was stuff like timed runs and leaderboards. We should have put those in there. I was thinking it wasn’t that sort of game, but a lot of people are saying that it would have been fantastic if we had done that.

What would your son have thought of the game if you had made the game much tougher?

Gavin Moore: He would have put the controller down and walked away, because it becomes frustrating.

So you made the right call!

Gavin Moore: I think so!

Is there a stage or a sequence that you’re particularly proud of?

Gavin Moore: Act 6 Curtain 1. Or Act 7 Curtain 1. Oh, I don’t know. All of it? There are so many things I love about it. I love the fact that the boss battles are old school, with patterns you have to learn. I love the design of the characters and the way they’re all so different. I love riding on the back of the dragon on Mr Pink who’s going off on one of his diatribes – that’s a great scene for me. It’s just packed full of stuff and we had so much fun making it that it’s really difficult to pick stuff out.

He finished Act 6 and I said “Let’s take a break, we’ve been playing for a while – but you have to give me a score,” So he said “Oh okay – 100 out of 100 – it’s really good Dad.” Then the next day we play again and we finish it, and the credits roll. His name is in there in the ‘Special Thanks’ section and he’s jumping up and down with joy. Just imagine being a nine year old boy and having your name in the credits of a game. So I say “So, now you’ve finished the game, I need a final score.” He goes “200! My name is in the credits!”

Maybe you should put journalists’ names in there next time!

You say your son is loving the game. Is he on track for the Platinum?

Gavin Moore: I don’t think I can clear the Platinum on it, let alone my son! It’s 58 Bronzes, two silvers and a gold. It’s ridiculous. You have to do stuff like kill 1,000 grubs and save 1,000 souls. Or find every Giant Moon Stone Shard – that’s the difficult one. We don’t tell you where any of those are.

It was interesting seeing your original concept video a few weeks ago. Are you surprised how different – or how similar – the final game turned out?

Gavin Moore: As I said before, games take on a life of their own, and that’s the way this one went. We made that concept video to get the game green-lit. Japan saw it and loved it, but went, “That’s going to take quite a bit of money, so you’re going to have to show it to America and Europe and see if they buy into it too.” So we did, and they both went, “Stunning. Gavin, that’s an incredible idea. But it’s too Japanese. It’s niche.”

So I went away and cried for a bit. We came back as a team and talked about it, and that’s when we decided to mix the Western influences I have from my side and the Japanese influences from my team’s side. But it actually switched around. I was putting in Japanese references because of my love for Japanese culture, and they were trying not to put in Japanese references as they thought it was boring, so they were trying to add Western ideas. It was a really interesting mix.

But if you look at it, the concept stayed true. It stayed in the theatre, it moved the same, you had the scissors, you were a puppet, there was a narrator. Which is interesting, because I can’t think of many games that I’ve worked on that have done that.

Really? Of all the games you’ve been involved with, this is the one that changed the least from concept to completion?

Gavin Moore: Definitely. I’ve been doing this for 21 years. I remember the original concept for The Getaway – it was totally different. It started out as a racing game around a city, and then it changed into a gangster romp with a full story, and before we knew it we were photographing the whole of London.

I always felt the Puppeteer concept was a good one, and that it was fresh. It took a little bit of time to explain the idea to the team, but once they were into it and had worked out the systems, they really got into it.

Making Puppeteer must have been a heck of a journey. Is it hard picking yourself up and getting yourself pumped for the next thing?

Gavin Moore: Completely the opposite – it’s easy for me. I already have another idea in my head, with another story that actually came to me on my European press tour recently. I already have some character sketches that I’m working on.

To stop being a creator is much harder than starting again. As you can see, we’re sitting here in Tokyo, on the 14th floor of the Sony building and all my staff are off on their holidays. But I’m not! My boss is going “Gavin, when are you going to take your holiday?” I really don’t need to. It’s nice and quiet. I can think and get on with what I need to do.

I really want to start on the next thing. Because the reaction has been really positive and a lot of people have enjoyed it, I want to get the next one out so that they can have fun again. That’s what I love doing – making sure people have fun.