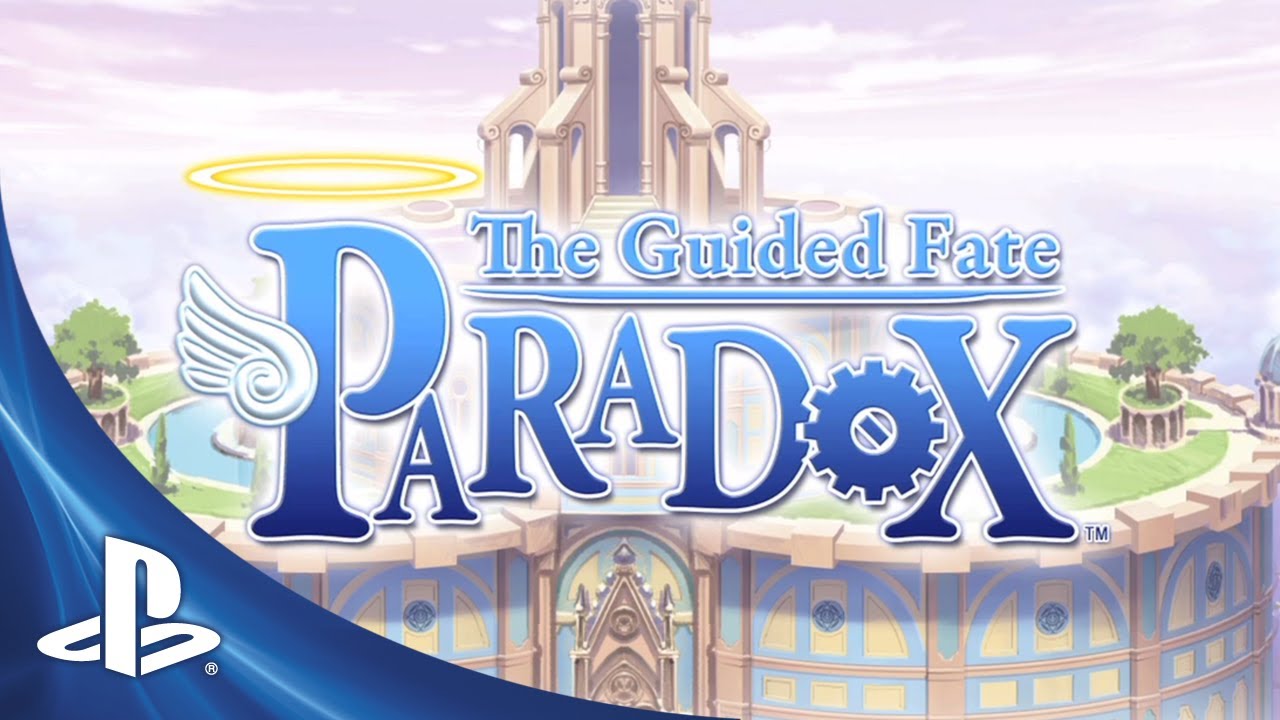 Hey, doods! It’s time again for your humble Prinny David from NIS America to talk about our next game, The Guided Fate Paradox, which is set to launch on November 5th exclusively on PS3. Let me tell you guys, this one’s a doozy. Shall we ascend and take an angel’s eye view of this title?

In The Guided Fate Paradox, you play as the exceptionally ordinary high school student, Renya Kagurazaka, who one day wins a shopping mall lottery hosted by a cute girl. Your prize? You become God! And that cute girl’s actually an angel named Lilliel tasked with helping you out.

Now your job as God is to guide people’s fates by entering the Fate Revolution Circuit, a nifty doodad that creates a Copy World of reality. It’s in this Copy World where you’ll do battle against aberrations — the physical manifestations of the things preventing people from becoming what they want — and help people achieve their potential. But you’ll soon discover that there may be darker forces beyond just these aberrations that are trying to keep you from guiding these fates…

The game is a story-based roguelike that plays like a spiritual successor to Z.H.P. Unlosing Ranger VS Darkdeath Evilman. Each person’s fate will drop you into a randomly-generated dungeon where you’ll move along a grid-based map and fight your way to the lower floors. But watch out: enemies move as you do, so you’ll have to strategize your path in order to eliminate the baddies as efficiently as possible without getting yourself cornered.

Luckily, you’ve got a whole arsenal of items, each with its own Divine Skills attached, to help you stave off these aberrations. Prinny hats, zombie arms, mermaid tails — all of these are at your disposal to mix and match to achieve victory! Plus, you actually get to see the equipment on your characters, so you can make yourself look as ridiculous as you’d like!

But what’s a God without some divine assistants at his disposal? In The Guided Fate Paradox, you get to bring in an angel to support you in your dungeon-delving, each of whom specializes in their own form of support — healing, follow-up attacks, shielding, etc. Choose whoever suits the dungeon best, and equip them with items to also give them access to Divine Skills. From there, you can give them commands to change their behavior, ranging from aggressively seeking out enemies to treasure-hunting, and — in a nod to Disgaea — even picking you up and tossing you! What else do these angels have hidden up their poofy, angel sleeves?

If this wasn’t enough customization, you also have the Divinigram, which allows you to give your angels and yourself permanent stat boosts and passive skills. You can achieve these bonuses by “Burst”-ing your equipment in dungeons, which essentially breaks the equipment to allow you to later strengthen that its base stats. You’ll also be able to synthesize items together, so you can fuse stat boosts into an item to create even more powerful equipment. Talk about playing God. The power of stat boosts compels you to keep on playing.

Did I mention this is a roguelike? For all of your stat-boosting, equipment-synthesizing, angel-having, and God-being, you can still die. And once you die in a roguelike, you lose all the equipment you’re carrying on you and your level resets back to one! Fear not though, because later in the game you’ll have access to safekeeping for your hard-earned items. And even though your level resets, the levels you’ve gained in the dungeon still propagate to your base stats. That means you go back into the dungeon as a stronger level one than when you started. The Copy World is kind!

Finally, The Guided Fate Paradox features the sublime artwork of Noizi Ito, the artist behind titles like The Melancholy of Haruhi Suzumiya and Shakugan no Shana. Such high-pedigree character design is brought to you in high-resolution sprites, which are perfect for showing off the ridiculous, over-the-top special attack animations. On top of all this, you’ll be treated to Ito’s delightful illustrations throughout special scenes in the game.

So, do you have what it takes? Max out your insane equipment, perform out-of-this-world attacks (literally) on hordes of enemies, and battle side-by-side with some wicked angels to steer Cinderella, a human-fearing zombie, and a cast of other colorful characters to their proper fate revolutions. Take on these randomly generated dungeons, and show the world that you were meant to win that lottery and become God! Just don’t try to steal from the cactus…

Thanks for your support, and taking the time to read this. Prinny out, dood!