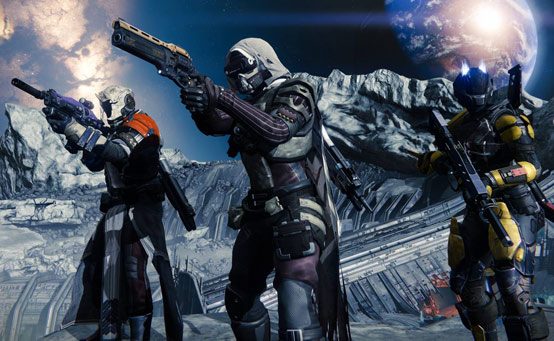 The team at Bungie is hard at work on Destiny, a vast and dangerous adventure that pierces the depths of the galaxy, tasking players with the defense of humanity. Bungie just recently revealed the cover art for Destiny, showcasing the awe-inspiring Guardians in all their cloaked glory. And yesterday, the beta was formally announced. It’s been a busy week.

With so much talk of Destiny in the air, you might have a few questions about this sci-fi, multiplayer shooter. That’s why we submitted your inquiries to Bungie’s Community Manager DeeJ, so he could shine a light in the black of space.

Read on for tons of details from DeeJ himself, including how easy you can drop into public events with other players, and what sorts of ways you can customize your Guardian.

@Zarshark: What does Destiny do that’s unique? What’s revolutionary that sets it apart? (Source)

DeeJ: Destiny casts you in the role of the iconic hero, and sets you on an epic journey brimming with heart-pounding action within a living world filled with adventure. You’ll cross paths with other brave heroes on their own quests — story, cooperate, and competitive — and they’ll know exactly how powerful and awesome you are just by looking at the gear you’ve earned.

@Tra_Royal: How many players can team up in Destiny? (Source)

DeeJ: Our core cooperative nucleus is the Fireteam — a group of three Guardians bound together by blood (and netcode). But whether you’re going it alone, of linked up with a Fireteam, you can still encounter other Guardians as you tackle the larger challenges that you’ll find in public events.

There’s no telling how many people you might have to work with to defeat the most dangerous enemies. Of course, other modes like competitive multiplayer, or Raids, will feature player counts well above three — but we’re not talking about those quite yet. Stay tuned!

@bo_srwa_w_fnila: How does joining a public event work? (Source)

DeeJ: To join a public event, all you have to do is get within range, and open fire. No lobbies. No loading screens. The frontier is open, and filled with encounters you can join, or skip right past, on your way to something you’ve deemed momentarily more important. @LazySigh: Will there be PvP? (Source)

DeeJ: Yup! We’re already thumping each other’s skulls in studio-wide playtests, battling other Guardians for glory, bragging rights, and rewards. All the gear you earn in competitive multiplayer can be taken into other modes, too (and vice versa)!

@jaydawg6958: I like to play games solo often. How much can I do alone? (Source)

DeeJ: Ah, the proverbial Lone Wolf. You can experience Destiny’s story as a party of one, assuming you’re that much of a badass. Destiny will never require you to team up with other people in campaign missions. You’ll see other players along the way, but you can choose to ignore them. That said, we think you’ll find that playing with other Guardians is quick, painless, and a ton of fun. It’s always your choice, though.

‏@jaydawg6958: How deep does the customization go? (Source)

DeeJ: All the way down to your bones! Well, maybe not that far, but Destiny will be what you make of it.

All of the weapons and gear you can earn in Destiny can be customized — some more than others, but the goal is to let every player tell a story through the gear and abilities they’ve earned and wear. You create a character, pick a class, gender, and race, and then you customize the way you look and fight by completing missions, defeating enemies, or maybe just by exploring the world. DeeJ: Bigger than anything Bungie has ever built. We no longer have mission designers, but world designers, instead. They’re building places worth visiting, exploring, and reclaiming from your enemies.

We’re excited, too! We can’t wait to see what you’ll do when you get in there. We’ll be watching!

‏@hell_razorX: What kind of endgame things are you planning on implementing to keep this world alive after players have finished? (Source)

DeeJ: We’re creating a world you’ll want to visit again and again, and it will evolve and change right alongside you. We’re going to fill it up with activities that we think will satisfy a lot of different types of players, or even the different moods you have.

That might mean something really challenging on the cooperative front, like a Raid. It might mean that amazing, exotic Sniper Rifle that you’ve been drooling over for the last few months. It might even mean the new twist we’ve put on the as-of-yet-unrevealed game type that makes it feel new and different.

For more on Destiny, visit PlayStation.com.