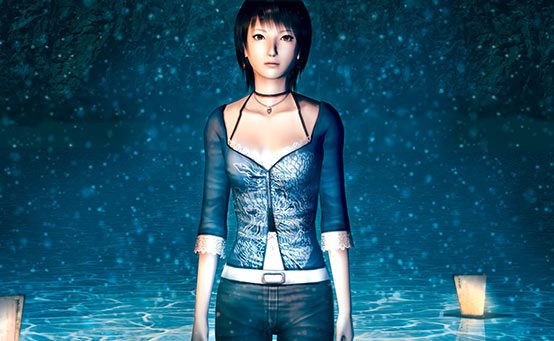 Before work began on Fatal Frame III, I heard that PS3 would be launching soon, so I conceived this project as a compilation of the past games, and our final game for PS2.

The first Fatal Frame used the Japanese horror technique of relying on the user’s imagination to create a sense of fear, while the second placed the emphasis on storytelling. For the third, we went with “fear lurking within the everyday” as the theme. In horror movies and such, the bedroom or bathroom are often where scary things happen, so we decided to try our hand and venture into these classic realms as well.

Yet, leaving it at “scary things in realistic places” would lack beauty, which is essential for any horror game. We needed more.

What I came up with was this: an old Japanese house within a dream, a house in the real world, and a player that travels between the two. In the Japanese house surrounded by thickly falling snow are the remnants of a mysterious ceremony, and the spirit of a girl covered with painful-looking tattoos can be found wandering around. Interacting with her causes the dream world to corrupt the real world.

For inspiration, I looked to my own dreams and supernatural experiences. In my dreams, I often visit a Japanese-style house like the one in the series. The Fatal Frame world takes its inspiration from my terrifying nightmares. Of course, everyone has really scary nightmares every now and then, but most people usually forget them once they wake up. But I remember mine in great detail.

For example, take this dream I had one night. I’m at the Japanese house, and the sound of chanting can be heard from the darkness. People in funeral attire whisk past me down a hall, their faces hidden behind the cloth, their eyes never meeting. When I give in to my curiosity and peer through the openings in the cloth at one of the faces, I realize it’s someone I know. Someone I know to be dead. I follow him down the hall until we reach the site of a funeral.

My funeral. The moment I realize this, every one of the attendants turns toward me.

In this dream, what happens next is usually what I’m dreading the most, probably because I’m telling myself, “This is the last thing I want to happen,” and my brain takes its cue from that. In this series, we try to adhere faithfully to this literal “nightmare scenario.”

The world of Fatal Frame III is full of these kind of dreams and supernatural experiences of mine. But to go into detail here would spoil the game, so you’ll have to play and see for yourself. Instead, I’ll talk about an encounter I once had with a ghost.

The system in Fatal Frame III that lets you see pictures in the real world that were taken in the dream world comes from a game I used to play with my friends when I was a child.

In our neighborhood there was a run-down, abandoned, Japanese-style house. Each of us would enter one at a time and bring back something from inside, which we would then make up a story about and show off to our friends.

One time, it was my turn. Thinking of getting it over with as soon as possible, I hurried to the back room and picked up a baby doll. It was the kind that speaks when a string on its back is pulled. When I tried pulling the string, the voice was distorted and broken. It was impossible to tell what it was saying.

Just then, I heard the sound of grating metal. It come closer and closer until it reached the room I was in. It was an old woman pushing a broken stroller. I threw the doll to give it back to her and sped out of the house as fast as I could.

Looking back, it hardly makes sense that someone would be pushing a stroller through an abandoned house with broken floorboards that no one had lived in for years. I don’t think that lady was from the real world.

I never did tell my friends about the old woman, but she appears in the game as a hostile spirit.

Visiting the Japanese house in my nightmares each night, and sometimes seeing spirits during the day. To put this daily cycle of mine — this innermost aspect of myself — into a game creates a huge and inescapable problem: to complete it, I must venture into that deepest room in the house of my dreams, to that same spot where I’m always pulled to, and see what awaits me there.

I know that to create a horror game is to play a game of chicken with suicide. After losing someone close to me, and chasing him deeper and deeper into the house in a dream where I had become Rei Kurosawa, there was a point where I wasn’t sure I could win.

Relentless rain. Snow falling ceaselessly at the house. Water falls to the ground and mingles with the earth, before running off, just as I run my course to the depths of my dream. Now that I think about it, the story should probably end with me unable to return from that world to reality. Running water never returns.

Yet, I was able to come back. There was only one time during that dream when the worst case scenario didn’t happen, and I can’t stop thinking about what it could mean. This experience is featured as the ending of Fatal Frame III. For me, this is what makes the game both frightening and meaningful.

To experience Fatal Frame III for yourself, visit PlayStation.com.