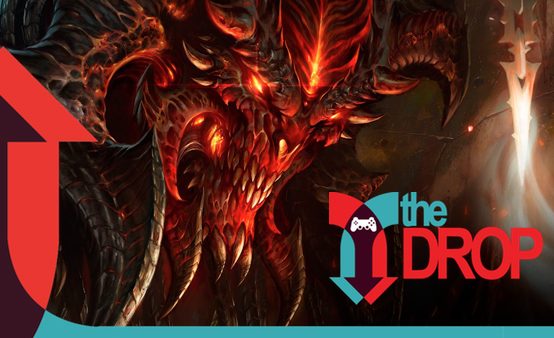 In Diablo III for PS3 this week; twenty years have passed since the Prime Evils were defeated and banished from the world of Sanctuary. Now, you must return to where it all began—the town of Tristram—and investigate rumors of a fallen star, for this is an omen that the End Times have begun. Play solo or form a party of up to four heroes—either with local players together on the same screen or network players online. Take a stand as one of humanity’s last defenders—barbarian, witch doctor, monk, demon hunter, or wizard—and level up with devastating new powers and abilities. Face innumerable demonic foes, uncover quests in new locations, and lay claim to masses of loot every time you play.

Diablo III picks up the story twenty years after the events of Diablo II. Mephisto, Diablo, and Baal have been defeated, but the Worldstone, which once shielded the inhabitants of the world of Sanctuary from the forces of both Heaven and Hell, has been destroyed, and evil once again stirs in Tristram. Playing as a hero from one of five distinct character classes, players will acquire powerful items, spells, and abilities as they explore new and familiar areas of Sanctuary and battle hordes of demons to safeguard the world from the horrors that have arisen.

(PS3/PS Vita/Blu-ray) — Rayman, Globox and the Teensies are back to embark on a new fantasy adventure through a series of legendary worlds with new environments, characters and enemies. Rayman Legends features a variety of uniquely-themed levels including several musical maps intricately set to creative soundtracks and a spooky medieval theme.

Players can also connect online with friends through a variety of challenges to test their skill and speed, and see where they rank on the worldwide leaderboards. Rayman Legends retains the fantasy appeal of its predecessor while adding a multitude of clever and entertaining gaming modes, new characters, new environments and a new soundtrack. The award-winning team of artists, designers and composers behind the UbiArt framework has also returned with an advanced engine to include multi-dimensional gameplay elements, an improved lighting system and updated game rendering that elevate Rayman Legends to the next level.

Brothers: A Tale of Two Sons

A man, clinging to life. His two sons, desperate to cure their ailing father, are left with but one option. They must set out upon a journey to find and bring back the “Water of Life” as they come to rely on one another to survive. One must be strong where the other is weak, brave where the other is fearful, they must be… Brothers.
Chaos Code — Grasp the Chaos! High-speed new-style 2D fighting game Chaos Code leaps from arcades to PlayStation 3! Otaku fighter Hikaru, mysterious gothic girl Celia, Italian Chinese Chef Bravo, and many more unique characters are waiting for you to join the battle! Create your own style with the Skill Select System and reveal the truth behind Chaos Code before your rivals!

Hunter’s Trophy 2: America — Experience all the excitement of the hunt in America! From brown bear to elk, track 25 different preys in this hunting simulation set in the most beautiful countryside of the USA.

Kickbeat (PS3/PS Vita Cross Buy) — KickBeat offers players several innovative ways to interact with music. The game combines beat-matching mechanics with an acrobatic style of martial arts, turning every song into a raucous battle. The game also features a music analyzer that allows players to create new tracks from their own music libraries.

One Piece: Pirate Warriors 2 — Sail again with the Straw Hat Crew in One Piece Pirate Warriors 2! After two years of training and gaining new skills, the Straw Hat Crew is back and better than ever as Luffy continues his quest to become the Pirate King! Luffy and his crew will appear with their New World outfits and all new attacks to take down hordes of Pirates and Marines that will flood the screen. Immerse yourself by playing the “New World” with your favorite characters and their latest techniques and costumes.

Stella Deus: The Gate of Eternity — A hand-drawn strategy RPG from the creators of Hoshigami: Ruining Blue Earth. Features include more than 50 hours of tactical gameplay, including sidequests, recruitment drives, and story-based missions, in addition to a multitude of different team attacks and customizable fusion-based item creation.