The Boss Battles of Puppeteer, Part 2 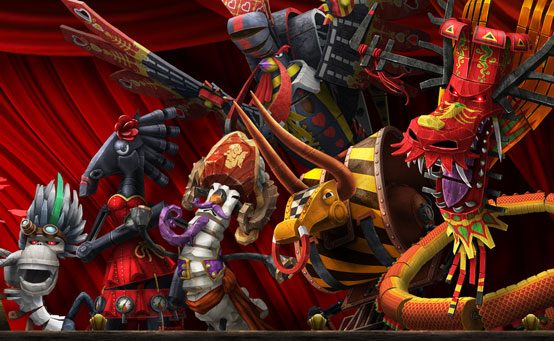 Hello everyone! I just got back from Germany where I had the amazing opportunity to discuss Puppeteer with so many people while at Gamescom. And, since Puppeteer is on the brain, I figured why not showcase the rest of the bosses in the game to you all. So, take a look at the final six Generals as well as some small details about the Moon Bear King. Puppeteer is almost out and I can’t wait for everyone to lose their head!

Appearance: Not a typical, solidly built Western dragon, but a Chinese-style flying, serpentine beast, with gemstones in his hands.
Personality: Brought up on the streets of the city of the Moon, Dragon is a wise guy. He is always saying “forget about it”, although no one ever does and Dragon makes sure they don’t.
Relationships: Dragon obeys the MBK like a “Made Man” to a “Don.” Though Kutaro does not realize it, it was Dragon who snatched his soul from Earth and brought to the Moon.

Appearance: A large dog that is mostly half dog and half machine. He is not entirely sure where all his body parts came from.
Personality: When tethered, or being handled nicely by Monkey, General Dog seems like an obedient domestic pet. He does as he is told, attacking anyone who attempts to enter Halloween Ville, but has no particular lines. Either he is very good natured, or rather dim. Most likely, it’s the latter.
Relationships: Completely loyal to the MBK. He is also utterly obedient to General Monkey although they are of equal rank.

Appearance: He is much larger than Kutaro, but still on the small side compared to the other Generals. He looks like a mad scientist which is apt as he particularly crazy and likes inventing.
Personality: He also has the personality of a mad scientist. He loves experimenting and scheming. He does not confront Kutaro directly, but observes him from the shadows and reports on his movements to the MBK. He tries to lure Kutaro into traps at every opportunity. He laughs frequently and has a tendency to flip mentally, becoming ever more manic once he has been set off.
Relationships: Though he loves to scheme, he is completely loyal to the MBK. Though of the same rank as General Dog, Monkey walks all over him, using him as a guard dog.

Appearance: A sheep with a pirate-esque hat. His body is covered in fluffy white wool, but his overall figure is slim and tall. He has the curved horns of a Merino ram and a long beard and moustache. He is armed with a pair of blunderbusses he wields like pistols.
Personality: Greedy is his middle, he refuses to abandon his lust for gold and trinkets of all kinds. He can also be a skinflint. On seeing Kutaro’s arrest warrant, Pig makes immediate preparations to seek him out at sea, but Sheep mocks this idea, claiming such a move to be a waste of time and fuel while they have no leads to follow.
Relationships: Sheep’s allegiance to the MBK seems fragile at best…best when there is money involved. Since they are both fiercely greedy, Sheep fights constantly with General Pig over the division of treasure and food, but they are nevertheless close partners…as long as they are making a tidy profit.

Appearance: This Rabbit dresses like a magician as he wears a tuxedo with a cloak, a silk hat, and a cane. When in a hurry, he rides a unicycle with a fob watch design.
Personality: A wannabe gentleman with an egotistic streak. He values teatime above all else, and has great confidence in his conjuring abilities.
Relationships: Though loyal to the MBK, Rabbit quickly forgets his duties in favor of a relaxing teatime. General Rooster is his tea companion, both share many hours quaffing tea and talking about the weather.

Appearance: A rooster with a very loud-colored plumage. His feathers are red in the main, and instead of a crested head, he has a pompadour hairdo.
Personality: A selfish show-off with a passion for teatime. Confident in his looks, he will take any chance to spread out his plumage for all to see.
Relationships: Though loyal to the MBK, Rooster quickly forgets his duties in favor of a relaxing teatime. General Rabbit is his tea companion, strange how these two get along, it must be the soothing effects of a fine Darjeeling.

Appearance: A huge, terrifying-looking, tubby bear, with just the slightest hints of cuddliness.
Personality: The tyrannical ruler of the Moon. As the leader of a military regime of terror, he treats others with high-handed contempt.
Relationships: As the absolute ruler of the Moon, he scares everyone off with his bellowing.