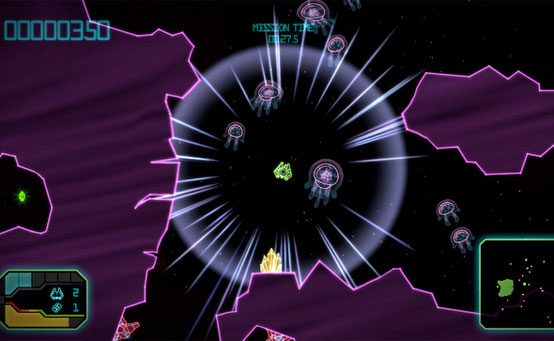 Hi PlayStation.Blog readers. Back in 2009 we released Gravity Crash for PlayStation 3, a love letter to classic ‘80s shooter gaming. The game was a labor of love for our small team, a team that wanted to produce a title with precision controls, high definition visuals and memorable sound but remain a modern-day interpretation of retro arcade gameplay.

If you’re unfamiliar with the game, Gravity Crash is a side-scrolling space shooter featuring well over 40 levels, a host of enemy types and five major boss battles.

We here at Just Add Water are excited to reveal that we’re now working on a native PS Vita version of Gravity Crash, which will retain that all important 60 frames a second speed with native PS Vita graphics running at the full 960 x 544 resolution, making the most of that stunning OLED screen – we’re really excited about how vivid and rich Vita makes our game look.

To us, PS Vita is the number one platform for the game – the bite-sized level design and clear structure making it the ideal game to play on your daily commute, and the system’s controls – with the dual analog sticks and touch-screen – allow for pixel-perfect precision in both the game and the built-in level editor.

Not only will players be able to craft their own devious levels with the same tools we’ve utilized in making the game, but you’ll also be able to share them with owners of the PS3 version. Levels will be shareable online, too, and we’re also working on PSN leaderboards for each of the game’s main levels so you can really show off your skills.

We’ve added new levels to the game, newly remixed music from original composer CoLD SToRAGE (who has worked on WipEout and Lemmings), tweaked weaponry and a host of new visual effects that really bring our vision alive. Along with Trophies, we really think Gravity Crash on PS Vita is the best version of the game we’ve made, and we can’t wait to show you more of it.