Payday 2: What You Need to Know 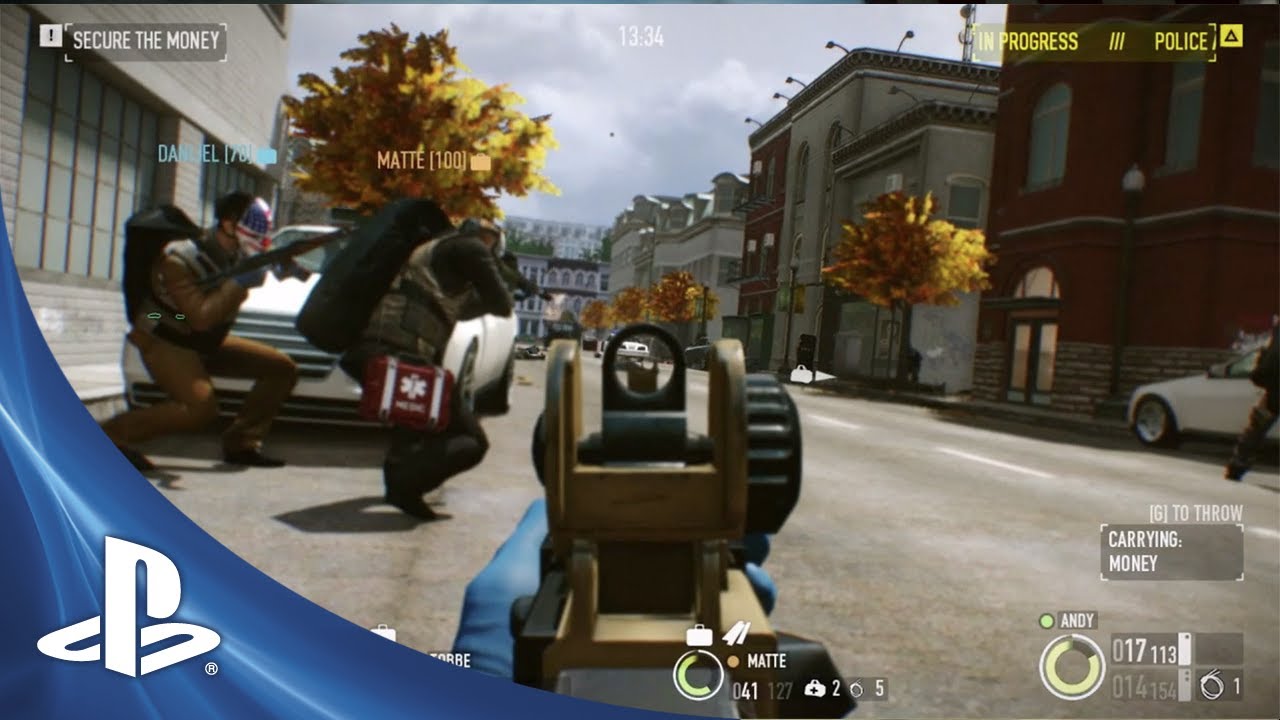 Hey everybody. We’re incredibly excited to say Payday 2 is arriving on PS3 this month! We’ll be bringing the four-player, cooperative heisting you know and love from the original Payday, but making it bigger, bolder, and badder — with a slew of new features that really give you a chance to live out that robbery fantasy, your way.

Now, before you go hitting that jewelry store without casing it at all, here’s a quick breakdown of everything you need to know about Payday 2.

Payday 2 is a sequel to the successful Payday: The Heist, a game first released on PSN and PC in 2011. Both games are first-person, cooperative shooters at their core. Both games share the same high-intensity, “be a bank robber” concept. But Payday 2 really builds on the robbery experience we pioneered in the first game and takes it to a whole new level. Our goal was to make players feel as though they can pull off the perfect heist. To make them feel like De Niro in Heat, or Vinnie Jones in Lock, Stock and Two Smoking Barrels — or even Jesse Pinkman doing a cook in Breaking Bad. We want players to live out the dream of a successful life of crime.

Any good robber knows it’s all about the money. Payday 2 adds a robust economy that pays you for each completed job. Money is used for everything, whether it’s paying for skill training, crafting that new weapon mod, or customizing your Cthulhu mask with an Overkill logo. And if you get sloppy with your bullets… that cleanup is going to cost you…

Well … not in the sense that you’re clicking through dialogue trees or watching cutscenes, and there’s nobody named Cloud … but Payday 2 definitely lets you create your own criminal and design the type of robber you want to play. There are four different skillset archetypes: Mastermind, Enforcer, Ghost, and Technician. Each archetype boasts 36 different skills and specific gear which can be mixed and matched to your liking.

Each archetype has a different set of strengths and abilities. If a player wants to be stealthy, but also carry a saw or silenced shotgun, he or she just needs to level up enough to spec the appropriate Ghost and Enforcer skills. Don’t forget that Portable Saw!

But the RPG comparisons don’t stop there. Completing a job means you get a Payday, where you get a random chance for cash, masks, mask parts, or weapon modifications, all of which can be used to customize your robber’s appearance and effectiveness. With 15 million variations to start, gun nuts and mask-lovers have a lot to look forward to. In Payday 2, there are five times as many scenarios as there were in Payday: The Heist, served up by our new dynamic mission delivery system: Crime.Net. Crime.Net is the mission hub where players can choose a broad range of mission difficulties, each paying commensurately more XP and loot as the risk increases.

The missions themselves are insanely dynamic and randomized, so everything is random, including the placement of cameras, civilian numbers, vault placement and contents, and even where the getaway car arrives (Or if it’s a car at all!). This adds a ton of replayability to the Payday experience. We even offer multi-day jobs, so we can change maps while on a big heist, or even interrupt them dynamically with a completely new map (called an “escape”) if things go really, really wrong on a heist. Best be careful, though. You don’t want to end up bleeding out and upside down in your vehicle, defending your loot when you’re supposed to be sipping cocktails in the safehouse.

Speaking of the safehouse…

Want to go somewhere safe and practice your lock picking without being shot in the face? Or admire your fat stacks in your very own bank vault? Or test-fire some of your newly crafted weapon mods? Head over to your safehouse where all this (and more) is available to you. Payday 2 adds stealth. A great majority of missions can be completed without setting off alarms, and — in many cases — without even firing a shot. You can jam the alarm, pick a lock, silently set up a drill, knock out a guard, turn off his pager with a whisper, get that vault open, grab the loot, and go on your merry way. It ain’t easy, but then again, a perfect crime shouldn’t be, right?