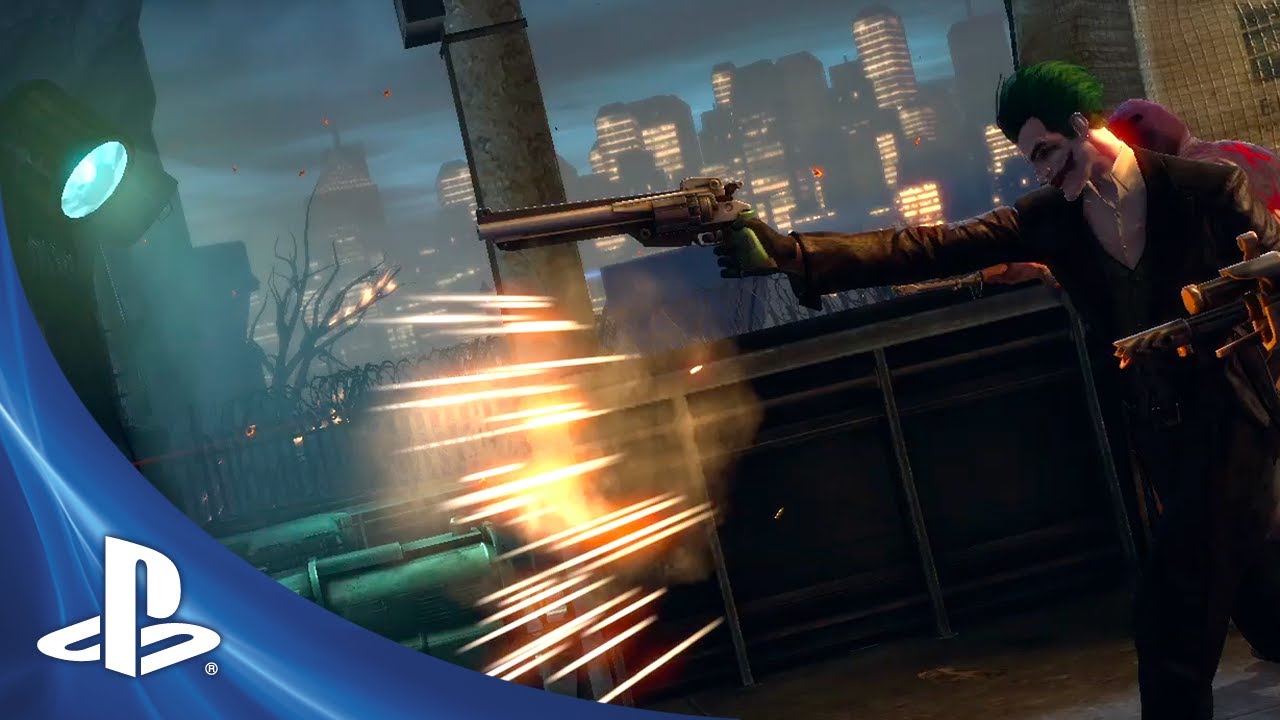 The Batman: Arkham series has proven that superhero games have the potential to be some of the best in the biz, but they’ve been strictly single-player outings so far. In Batman: Arkham Origins, WB Games and Splash Damage are building an online multiplayer experience to complement the main campaign. And guess what — it’s really good.

Called Invisible Predator Online, this new mode takes the concept of the earlier games’ Challenge Rooms and puts other players into the role of the Joker and Bane’s thugs. Yes, this raises lots of questions. The general premise is as follows:

Eight players take to the streets of Gotham in the game’s multiplayer mode: three Joker thugs, three Bane thugs, and two heroes in the form of Batman and Robin. The thugs compete to wipe out the other team and capture control points in what plays out like a third-person, cover-based shooter. Meanwhile, the two heroes prowl the playfield in an attempt to intimidate enemies and provoke the gang leaders into calling the whole operation off.

When playing as Batman or Robin, variety matters. Repeating the same takedowns over and over will result in lower and lower intimidation yields, so you’ll need to get creative. Hide in ducts and score a takedown when someone passes over you, then grapple to a gargoyle overhead to get the drop on another unsuspecting thug. Set some explosive gel and wait for the right moment to detonate, while hiding in the shadows for a surprise chokeout. The more you mix it up, the better your chances. Whatever you do, though, be careful — getting taken out will bolster your foes’ confidence, undoing a good chunk of the progress you’ve made so far.

Initially, playing as Batman or Robin seems like a privilege players will be fighting over, but I actually had more fun getting down and dirty as one of the henchmen on the field. This mode would be a fully competent third-person shooter without the heroes’ presence, but their inclusion adds a wildcard element that turns Invisible Predator Online into a completely different kind of experience.

Tensions run high when you know the Batman could be around any corner, and the game plays to that stress. More than once, I noticed movement out of the corner of my eye and immediately fired in its direction, before realizing (too late, of course) that it was a flock of bats and my true target was lying in wait above me.

This trepidation follows you throughout the course of each match, so the last thing you want to do is assault your opponents head-on. You’ll be constantly watching the shadows, grates, and gargoyles above, while working to eliminate the opposing gang’s forces and capture the map’s control points.

In a fun twist, once the match has progressed a bit, the leader of your gang will radio in and demand entry into the arena. The first person on either team to reach the door they’re waiting at will assume actual control of either the Joker or Bane depending on their allegiance that round. The gang leader is, as one would assume, vastly more powerful than the standard henchmen, and can often turn the tide in a seemingly one-sided battle.

There’s an engrossing customization element to the game, as well. You can outfit all three factions with unlockable gear and outfits that you’ll earn throughout your time playing Invisible Predator Online. These range from practical upgrades like new weapons and additional loadout slots, to more fun options like the ever-popular Animated Series Batman costume.

Oh, one quick aside: Robin, while reportedly not a part of the single-player campaign, has a slick new character model in Invisible Predator Online. He’s not the gruff Robin from Arkham City, though that outfit is unlockable, but a younger, leaner Tim Drake (confirmed!) who looks more in line with the Robin you likely know from the comics or the animated series.

It’s still pretty early, but there’s already plenty to love about Arkham Origins’ multiplayer. This isn’t a loosely-constructed mode for the sake of printing another bullet point on the back of the box but a well thought out, fully realized multiplayer experience set in the Arkham universe. Splash Damage has a monolithic pedigree to live up to, but based on what we’ve seen so far, it seems they are up to the task.

Got any questions about Invisible Predator Online? Shoot ’em my way in the comments and I’ll answer what I can.