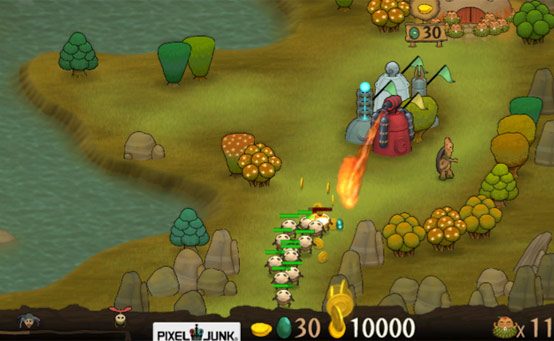 When we announced PixelJunk Monsters’ arrival on PS Vita in June, we were met with an amazing response from fans and the pres waiting with bated breath to see the tower defense classic come to life on PlayStation’s new handheld. Well, the wait is over and we now have an official release date!

PixelJunk Monsters: Ultimate HD will be available on PSN July 30th for North American gamers, and will cost $14.99. Players in Europe will be able to join in the fun on July 31st, as will the majority of Asia with a Japanese release date to be announced soon.

PixelJunk Monsters: Ultimate HD game has been faithfully recreated for PS Vita in high definition, with 30+ hours of gameplay, online and ad-hoc co-op play and everything you loved about all the previous editions. Our very talented team put a lot of work into making this the definitive edition of Monsters!

Seeing the game released in just two weeks’ time marks our first independently released title as a studio — an epic milestone for us! To celebrate, we will be announcing some very cool giveaways, so feel free to follow us at @PJMonsters, where more info will follow shortly.!