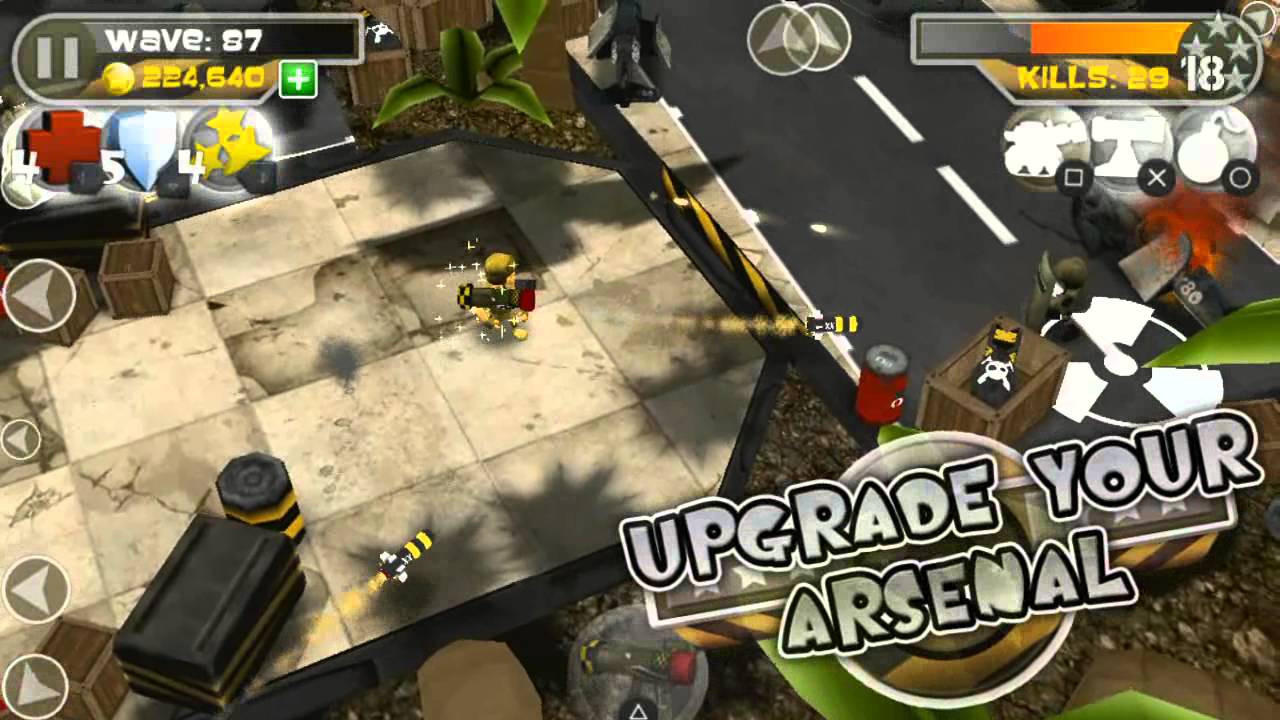 Atten-tion recruits! This is an intel report from Si at indie developer Eiconic Games in the UK. We’re glad to report that Total Recoil is making its way to PS Vita on July 9. Download it and enjoy an explosion of arcade shoot ‘em up action.

There are only two rules in Total Recoil…

It all started when I was “busy” (with my feet up) playing Call of Duty on PS3, thinking to myself “These shoot-em-ups have come a long way since the old arcade games.” So this started me wondering how a modern game would look on an arcade cabinet. It would be top-down, the characters would have large heads, there would be wave after wave of baddies with flamethrowers, huge tanks and attack copters – and this is what you get with Total Recoil.

But developing on the PS Vita is better than an arcade machine and gives us more control than mobile and tablet games – we’ve made use of all the PS Vita’s controls. You use the left stick to move, the right stick to shoot and strafe. When you fire a missile you can trace its path around the screen using the rear touch pad. When your killstreak bonus grants you an air attack, you can pilot your plane using the front touch screen.

Think this all sounds simple? That’s right soldier – but only until you graduate boot camp! Before you earn your stripes we’ll guarantee you’ll get shot at, fried, blown up and electrocuted.

The biggest decision might be your choice of weapon. Will it be the laser-sighted assault rifle? The “slice ‘n’ run” chaingun? The “boil-their-brains” flamethrower? The “stinging” hornet cannon? The “gut-busting” grenade launcher? The “shoot-whilst hiding-round-corners” missile launcher? Or the “make-like-a-storm” electrifying tesla gun?

Being an independent studio means we can make the game we’d like to play and add as many cool features that we can think of. In fact we had so many ideas it was a struggle to get them all into the game in the time we had. We have had great support all the way and we’d like to thank everyone who has helped. We couldn’t have made Total Recoil for PS Vita without Shahid and Spencer at SCEE – you’ve been outstanding marines!

As well as great gameplay and cool 3D animation, we were lucky to be able to use the talents of legendary voice-over artist Tom Clarke Hill. You’ll have heard his work even if you don’t recognize the name – Tom has been the voice of Tony the Tiger for many years. He’s grrrrrrrreat!

Check out the game on Facebook for more behind the scenes details and updates. Move out!