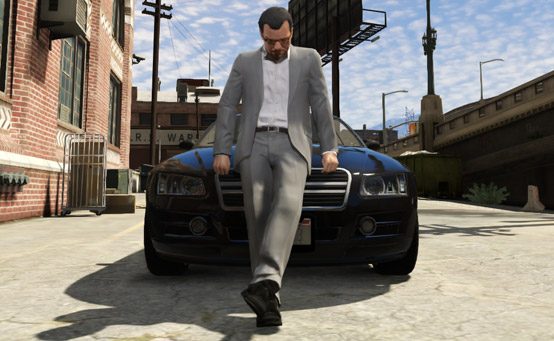 Los Santos is the biggest Grand Theft Auto city yet… and even that is an understatement. Spanning the city of Los Santos and the wide-open countryside of Blaine County, GTA V is larger than Grand Theft Auto IV, Grand Theft Auto: San Andreas and the frontier world of Red Dead Redemption combined. What’s more, it will all be fully open for you to explore from the very start of the game.

Three is the magic number

For the first time in a Grand Theft Auto game, you’re not just playing as one character, but three – each with their own individual personalities and lives to live. You’ll get to play missions as one character, combinations of two, and sometimes all three. When you’re not out on a mission, you can switch between these three leads in real time using the character wheel. While you’re controlling one character, the other two will carry on with their daily lives, so you’ll never know what you’ll find the other characters getting up to when you jump between them.

Michael is an ex-bank robber, living a comfortable life under the witness protection programme thanks to a deal he made with the FIB (the game’s version of the FBI). But despite seeming to have it all with a big house and pool in the exclusive Rockford Hills area, fast cars and plenty of money, Michael’s dysfunctional family life has made him resent his retirement and he yearns to get back to what he does best.

Franklin is a born hustler working as a repo man for a luxury car dealership – when their customers inevitably can’t keep up with their repayments, Franklin is the hired muscle who will come knocking to take back their vehicle. Spending time behind the wheel of so many high-performance cars has moulded him into a skilled driver who loves to race, as well as an adrenaline junkie; Franklin can often be found in the doorway of an aircraft, ready to skydive over the sprawling Los Santos landscape.

Trevor is best described as a loose cannon – a one-time criminal associate of Michael, Trevor’s life couldn’t be more different to his ex-partner. Living miles from the city out by the Alamo Sea, his chaotic trailer park life is fuelled by drink and drugs, and joining Trevor could find him doing almost anything – fighting, flying or passed out on the beach dressed only in a pair of grubby underpants. For all his flaws, Trevor is a useful member of the crew – as an ex-military pilot, he can take to the skies in almost any aircraft; handy for the game’s more epic missions.

Play to your strengths

In keeping with their own personalities and skill sets, each character has his own special ability that can be pivotal to successfully pulling off missions and heists. As a veteran bank robber, Michael can slow down time during gun battles, allowing for precision targeting of enemies. Franklin has a similar ability whilst driving, letting him take sharp corners and swerve through built up areas without writing off his vehicle. Trevor can harness his anger and fly into a rage that means he’ll take less damage from enemies and can perform a unique melee attack on his foes.

Previous Grand Theft Auto titles have seen you take on the role of a low-ranking hoodlum, making your way up through the criminal underworld by carrying out jobs for shady kingpins. In Grand Theft Auto V, you’re jumping directly into the lives of three established criminals, taking in control of the trio’s individual destinies, as well as helping them work together to plan and execute a series of daring heists. As well as these elaborate missions, you’ll also be able to take on additional side quests, or involve yourself in any of the dynamic events that happen as you make your way through Los Santos and Blaine County – for example, encountering a robbery will give you the choice to help foil the crooks, or you can give them a hand in exchange for a share of the loot.

There are more vehicles than ever

The roads of Los Santos are packed with vehicles for you to borrow, as well as motorbikes, trucks and supercars – if you know where to look. But the transport in Grand Theft Auto V isn’t confined to the roads. There will be boats and aircraft for you to pilot – and even bicycles, if you prefer a more environmentally friendly way to travel.

There’s a whole world out there

There’s more to Grand Theft Auto V than just the urban sprawl of Los Santos. Beyond the city limits there’s a living, breathing world with its own thriving ecosystem; mountain lions prowl the hillsides, sharks patrol the oceans and fish fill the rivers. As well as the wildlife, the great outdoors is alive with hikers, campers and fishermen enjoying their surroundings, giving the game world greater depth and detail than any of its predecessors.

Take some time out

If you want to take a break from planning the perfect heist, there are plenty of ways to kill time in Los Santos. Any of the characters can indulge in various hobbies and pastimes, such as going shopping, practicing yoga, playing golf or tennis, and even taking part in a triathlon. Or, if you prefer something to really get the adrenaline pumping, you can send them scuba diving, jet skiing, base jumping and more.

PS3 is the best place to experience GTA V

Starting September 17th, you can get your hands on an exclusive PS3 bundle – including a 500GB PS3 system and a copy of the game – that will let you experience Los Santos in style. Separate to the PS3 bundle, PlayStation teamed up with our friends over at Rockstar Games to create a custom-designed Grand Theft Auto V Pulse wireless headset, so you can enjoy the game’s many unique radio stations and in-game soundtrack with crystal clear sound.

We’ll keep the Grand Theft Auto V news coming, but in the meantime, check out Rockstar Newswire for all the latest news and announcements from Los Santos.