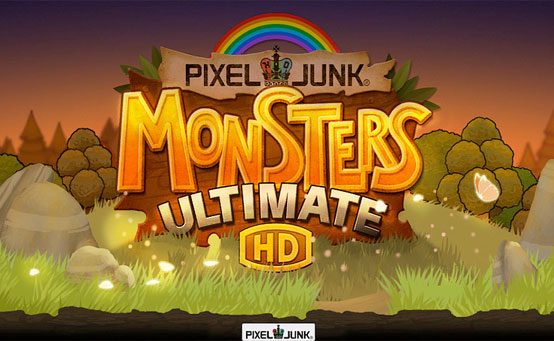 Double Eleven, Ltd been entrusted with the keys to the kingdom for classic series such as LittleBigPlanet and Limbo. For us, PixelJunk Monsters sits alongside those hallowed classics. In designing PixelJunk Monsters: Ultimate HD for PS Vita, we wanted to take the fabulous PixelJunk Monsters Deluxe and make it an even better experience. We worked closely with Q-Games to get it right, and then chose the name “Ultimate HD” at the end of development. We hope that’s what we have created!

We’ve been big fans of Monsters and the other PixelJunk games for some time; the sharp, colorful graphics and addictive gameplay had us hooked. Monsters is one of those games that is super casual, but incredibly difficult at the same time: a quality which made us – and many others – keep coming back for more. The tower defense premise is very familiar, but Monsters’ effortless execution sets it apart from other games in the genre. We realized that if Monsters were remade today, it would still stand out amongst other games in the genre.

So we set out to make the definitive version of PixelJunk Monsters for PS Vita owners. Monsters Ultimate HD has more than 30 hours of gameplay set across story and challenge levels. All of the graphics have been remastered for the PS Vita’s high-resolution screen, and we added touchscreen input to provide more control of Tikiman. Ultimate HD includes the Encore expansion, as well as all the extra towers, enemies, and levels from the Deluxe edition last seen on PSP.

If you’ve never played PixelJunk Monsters, here’s a quick primer. As Tikiman, you must protect your helpless babies from waves of incoming monsters. You’ll build weapon towers in the right places and at the right times in order to kill enemy monsters. You can grab coins and gems from fallen monsters to spend on building more towers, upgrading existing towers, or research towards powerful new towers. Monsters come thicker and faster as the waves advance, keeping the challenge consistent throughout.

When we first began planning Ultimate HD with the guys at Q-Games, our ideas spun off in many different directions. Initially, we considered opening Pandora’s Box by tweaking the gameplay, doing things like (gasp!) introducing checkpoints in between attack waves. Why? Because we wanted to reduce the game’s legendary difficulty that, at times, made us want to rage quit by hurling our PS Vita across the development room (it’s carpeted, don’t worry).

But after we discussed our ideas with Q-Games, and tried out a few potential solutions, it became clear that the sense of pride you gained in “rainbowing” (perfectly completing) a level would become somewhat less satisfying. In Monsters, you earn your rainbows and that’s it. So we agreed that our ultimate edition would stay focused on remaking the visuals for Vita’s awesome OLED screen, introducing touchscreen controls that complimented the gameplay, and compiling everything featured in the PS3 and PSP versions. We also designed the Trophies to be an extra treat for those wanting even more challenge: Our best in-house players have taken three days solid to complete the game on the hardcore setting!

When you work with a studio like Q-Games, you don’t work with “IP” or a “brand” – you work with people that put their heart and soul into making the game. Remaking PixelJunk Monsters meant enhancing a cleverly crafted tower defense game while retaining its purity — and adding a fresh helping of Double Eleven enhancements to PS for Vita fans!