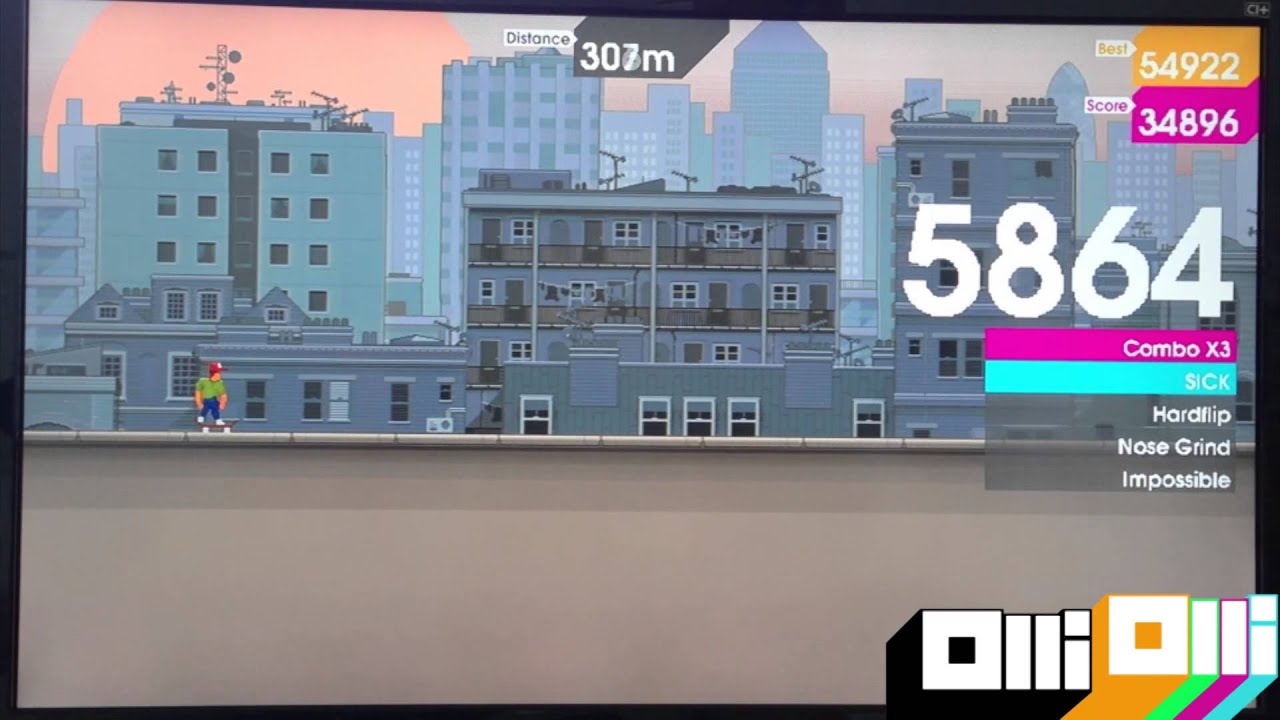 Hello! I’m John, the game designer at Roll7. You may have seen a few snippets about OlliOlli already but as we approach E3 we wanted to go into a bit more depth about the game and let you know where the idea came from.

So, I’ve had a skateboard since I was about five. In my teens I actually got quite good and was sponsored for a while by Route One. Even now I still like to do the odd kickflip or whatnot (although breaking an arm is much more of a worry than when I was a kid).

I’ve played and loved all the skateboarding games from 720 and California Games to the more recent Tony Hawk and Skate games, but for me there was always something missing in the newer titles that meant it wasn’t quite the same as real skateboarding…. Skateboarding is hard.

While Hawk and Skate are awesome games, the thing that bothered me was that if you did a kickflip, you would always land it except for if you hit the floor while your trick animation was playing.

Now, any of you who have ever set foot on a real skateboard will know that it’s not making the board do a crazy flip that’s the tricky bit, it’s getting your feet back on the darn thing afterwards and nailing that perfect 360 flip after hours of practice!

From a game design point of view, this is a bit of a tough one, if you slammed 49 out of every 50 kickflips, you’d give up. I think this is partly because in a 3D skateboarding game there’s so much going on, that adding the extra element of “landing” your trick, on top of lining it up, choosing it, pulling it etc would make your head explode. So instead they satisfy you by letting you pull a multi-million-trick combo. With OlliOlli being 2D, there’s only one thing to trick on at a time. Don’t worry, we’re not getting rid of combos, they’re still there! But in OlliOlli, every time you’re about to hit the floor, you gotta hit the X button to land the trick. The closer you are to the ground when you hit X, the more points you score. Leave it too late and you slam. And if you slam, that’s your whole run over.

It’s harsh, but it means that you weigh up each obstacle you come across; do you go with something simple or go big and risk losing it all?

It’s this mechanic that carries across the whole game. For a 2D game we’ve gone pretty mental with the tricks, there are about 30 in total, each of which you can do in four different stances. You can modify these with spins too, meaning there are literally loads of different combo opportunities. If you want to play it like an infinite runner you can, but if you’re into your combos, you can go really deep with stuff like switch bigspin flips, to crooked grinds.

In Career Mode you’ll beat challenges based on distance, score and your ability to pull specific tricks and combos. In Spot Mode you’ll compete against everyone else in the world to be the dude that works out the best possible line at a Spot, then there’s Infinite Mode which lets you cruise for as long as you can, beating increasingly hard obstacles. We’ve got some other ideas too, but we’ll see where they take us!

Right now we’re working on our E3 demo, which we hope will give you a flavour of what’s to come. You can take a sneaky peak at the current build here: