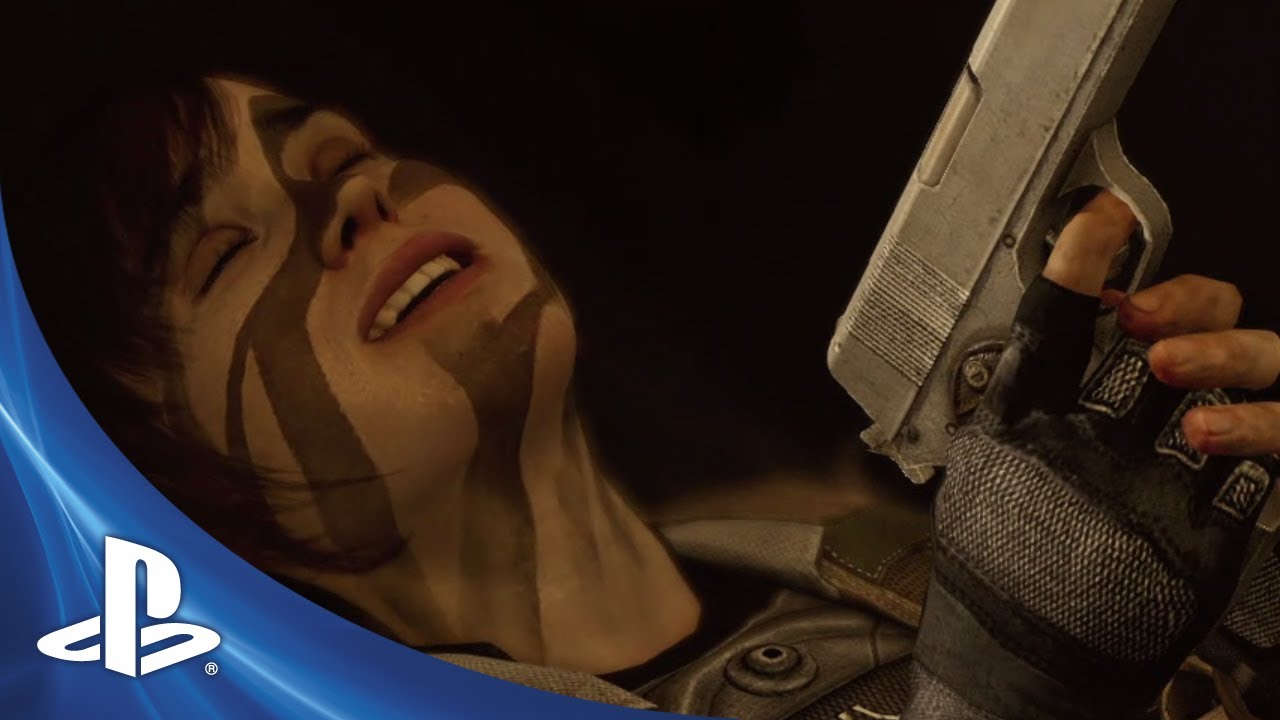 So far this year, we’ve put a lot of focus on BEYOND: Two Souls’ cinematic presentation and powerfully emotional storytelling – we’ve revealed Willem Dafoe as Ellen Page’s co-star, debuted a beautifully cinematic story trailer, and even revealed a full scene from the game at Tribeca Film Festival to show you just how groundbreaking BEYOND: Two Souls aims to be. The “Interactive Drama” genre is a bit of a unique concept though, and one of the consistent questions we’ve received from those of you who missed out on experiencing Heavy Rain is: “BEYOND looks like it has a fantastic story, but how does it play?!”

During yesterday’s press conference, we debuted our E3 trailer.

Today, I stepped up on the stage in our E3 booth to give a guided walkthrough of a portion of the Somalia scene to carefully illustrate these gameplay mechanics in action. We’ve created a short video to more clearly explain these mechanics, and provided written descriptions below as well.

BEYOND: Two Souls features much larger and more open environments than those found in Heavy Rain, and to coincide with this, the gamer will have much more freedom to explore their surroundings and find small side bits of information. The “R2 to walk” control scheme from Heavy Rain is gone as well – now, navigation with Jodie is controlled entirely using the left analog stick.

As you navigate these environments, the camera will dynamically change to more cinematic angles, and Jodie’s animations will tailor themselves to her age and situation, leading to a uniquely immersive and filmic experience. All of the videos you’ve seen us release thus far are in fact entirely user-controlled; it’s just difficult to distinguish without the controller in your hand. One of the most exciting new developments in BEYOND: Two Souls is the much smoother interaction UI. In Heavy Rain, every time you wanted to interact with an object or perform an action, a button prompt would appear on-screen. In BEYOND: Two Souls we decided to implement a more “invisible” interface:

Jodie’s actions will be now prompted with a small white dot that appears over each object you can interact with. Then, through a simple gesture of the right analog stick, you will enable Jodie to perform a contextual interaction such as opening a door or inspecting a piece of writing on the wall. The new interface is extremely intuitive for both new and existing fans alike, and the contextual actions allow for an array of movements and actions that make Jodie feel more like a living, breathing character.

By granting players control over Jodie’s conversations and actions, it also empowers the player to change the evolution of the story in a number of exciting and different ways. In keeping with the theme of eliminating jarring button prompts and creating a more immersive and cinematic experience, prompts have also been removed from action sequences involving Jodie. Rather than button prompts on-screen, the entire combat system has been replaced with a slow-motion (also called “bullet-time” since The Matrix) gesture mechanic based on the right analog stick.

At various action points during each fight, the action on-screen will change to slow-motion and greyscale for a split second, and during that time you will need to quickly analyze the action and input a gesture with the right analog stick. This gesture will need to be the continuation of Jodie’s on-screen movement (e.g. if Jodie initiates a punch to the left on-screen, you will need to hit left on the right analog, thus completing her action). The tension runs high as Jodie’s success or failure in each action sequence depends on quick and accurate reflexes. Last, but not least, of the new gameplay you’ll experience in BEYOND: Two Souls is taking control of Aiden, the entity connected to Jodie. At any point in the game, you can switch between Jodie and Aiden at a simple touch of the Triangle button. Using both Jodie and Aiden together will be critical for both protecting Jodie and solving puzzles Jodie comes across during her journey, as well as gaining additional insight into the characters’ stories.

When controlling Aiden, navigation is controlled using the left analog stick to move forward/backward/side-to-side, the right analog to rotate, and the shoulder buttons to control altitude. Aiden is only restricted in its movement by the tether that keeps it connected to Jodie, and can fly through or around any matter in the environment. Aiden has the ability to interact with people and objects by locking on with L1 and then either pulling the glowing orbs in or away from the target, allowing it to choke people (red aura), possess and control them (yellow aura), and blast objects with invisible force. BEYOND: Two Souls truly does feature a unique brand of gameplay, which creates a fun and engaging way to experience one of gaming’s most powerful stories.

What the game is of course NOT though, is just a series of cinematics with minimal gameplay in between. If you’re at E3, be sure to come by our booth and try it for yourself!

Pre-order here, and remember that pre-ordering at GameStop will get you a nice package of exclusive goodies too.