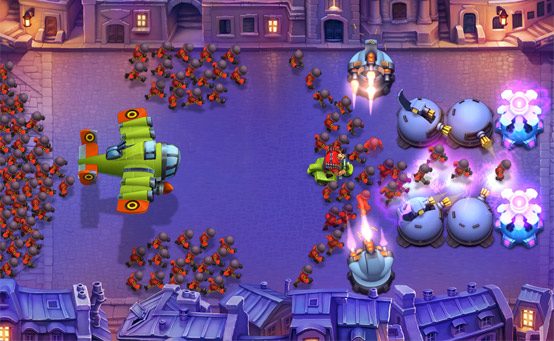 Are you ready to defend the world? Fieldrunners 2, the “king of tower defense,” storms onto PS Vita this summer.

Everyone at Subatomic Studios is thrilled about launching Fieldrunners 2 on PS Vita! When we brought the original Fieldrunners to PSP back in 2009, we were completely overwhelmed by how much enthusiasm and support you all showed for our game. You folks are awesome, Sony rocks, and that’s why we’re bringing the biggest tower defense game ever to PS Vita this summer.

In Fieldrunners 2, our aim was to make everything bigger and better, while still respecting our fans as tower defense connoisseurs. We started by building a new game engine, which allows each and every enemy to carve their own unique path through the battlefield. Drop a tower in front of them? Their relentless waves wrap right around it. Use bridges and tunnels to create a killer choke point? Enemies get caught up in a huge traffic jam.

How will you ever defend yourself against these legions of baddies? With over 25 devious new towers, those fieldrunners don’t stand a chance! Since our last encounter in 2009, the mad scientists at SubaLabs have been building the most cutting edge weaponry imaginable. You’ve still got the trusty Gatling Tower, but mix in a tower that throws bee hives at enemies and you’re ready to party! We’ve got towers that launch infectious syringes, guns that turn enemies into cows, flame throwing Jack O’Lanterns and more. On top of that, SubaLabs has also developed special, precision based attacks. Experience the magic of Christmas as Old Saint Nick lobs explosive presents from his sleigh with the devastating Santa Strike! With serious tactics and kooky weaponry, you are bound to have a blast with Fieldrunners 2.

Fieldrunners 2 for PS Vita is now in the final stages of development. Packing a new engine, crazy weapons and all new precision attacks, tower defense fans will be in for a real treat! We’ll be back soon to give you more info about all the cool features we’ve added, as well as a launch date. Get ready to… DEFEND THE WORLD!