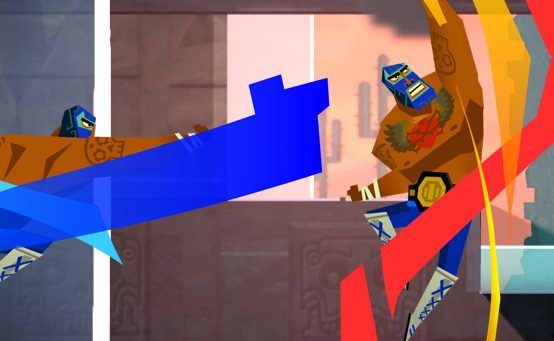 It’s been two months since Guacamelee launched on PS3 and PS Vita. Thousands of you have uppercutted, slammed, and derped your way through the evil forces of Calaca onto our leaderboards.

Hopefully the blisters on your thumbs have healed enough so you can enjoy the DLC we’re releasing tomorrow. New costumes! New Trophies! And at only $1.99, you could buy it twice and it’s still cheaper than your favorite premium coffee…

First up: the Identity Swap costumes, starring Juanita or Tostado! (Tostado is PS3 only.)

Juanita wears blue tights held up by a championship belt, and a tank top with a flaming, flying heart logo on it. Tostado (not to be confused with Tostada), wears matching pink shpants and luchador mask, and has dead bandaged-up blue skin. These two deal extra damage with punches/kicks, but have weaker throws. You’ll get a new ‘Heroine-ism’ trophy when you defeat Calaca with Juanita.

Have you ever wanted to run around wearing a chicken suit, either at school, at work, or at your local mall, just because? The Pollo Luchador costume lets you do just that. Play as a giant chicken luchador in the comfort of your own living room. Or with a PlayStation Vita, you can be a giant chicken at school, at work, or even at your local mall. This costume is so realistic, that giant chickens found all over Guacamelee will think you’re one of them. You’ll have to find all of the green-sombrero-wearing giant chickens to earn the ‘Greetings, Fellow Chicken’ trophy.

While wearing the chicken costume, the player will regenerate health over time without having to collect health orbs. Perfect for those areas where you need more help than a busted up barrel can offer. And when you use your Pollo Power, you turn into an egg that can run around, giving you valuable insight into the question ‘Which came first?’ (Note: also the name of one of the new trophies!)

Lastly, when in Rome, if you can’t beat ‘em, join ‘em (wait, is that right?). Well, even if you aren’t in Rome and can beat them, beat them in style with your new Skeleton costume. You won’t break a sweat as a Skeleton since you’ll have no skin and infinite stamina! Back in my day, we didn’t need infinite stamina to finish Guacamelee!. Unfortunately, health orbs will have no effect on you. Don’t ask why, it’s just science. Try and get through the third column in the Caverna del Pollo without healing for a shiny new gold trophy!

In all, that’s three new costumes for Juan and Tostada, and six new trophies for $1.99 in the PlayStation Network Store tomorrow. Or access the PSN store in-game by going to any autosave/store altar that asks you if you “wants the stuffs” because it “gots the stuffs” (stuffs = DLC). Hope you like it!