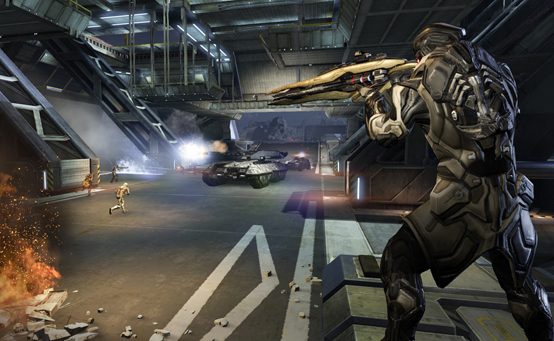 Greeting DUST Mercs! Ten years ago EVE Online launched on PC, and during that time it evolved with its players into the incredibly successful, critically acclaimed sci-fi game that players know today. It grew organically beyond the original vision of the designers and into the player-driven galactic sandbox game where immortal starship pilots take the power to dictate their own destiny.

About a year ago we began a similar journey with DUST 514.

We set out to create something so ambitious and so crazy that we as gung-ho Vikings, had no choice but to make work. We sought to expand the EVE Universe from the stars to the planetary surfaces by creating an intense FPS on console and linking it to the largest single-shard PC-based MMO in history. Not only did we want to link DUST 514 to EVE, we wanted a ramped-up level of interaction where DUST mercs communicated with EVE pilots and cooperated in space and on the ground to generate galactic conflict of amazing scale.

Mission accomplished. We are humbled and proud to be with you here on launch day to deliver on that original vision. Now that DUST 514 has launched, a new door has opened for the EVE Universe. And while there are two separate games, it will always be about “One Universe, One War” in New Eden.

We are excited to take the beta label away from DUST 514, and now that we have launched, we look forward to the stories that our players will create as they jump headfirst into the massive galactic conflicts that await them.

This is only the beginning of the road for DUST 514 we turn it over into the hands of our players to mold and shape. We, the development team, will always be updating the game so that it grows with its players. And the ways they interact with DUST 514 are always evolving. At CCP, we think of launch as just that: the beginning of an endless upward climb. Today begins a truly exceptional gaming experience where the ramifications of every laser blast will be felt across the galaxy.

It takes a team of developers, designers, artists, testers and producers to create a game, but it takes the players to transform it into something truly fantastic. So a final thank you to the teams of developers I work with and to what I can only call the most honest, vocal and best community of players in the world. We could not have done it without you guys.