Watch_Dogs: 7 Things You Need to Know 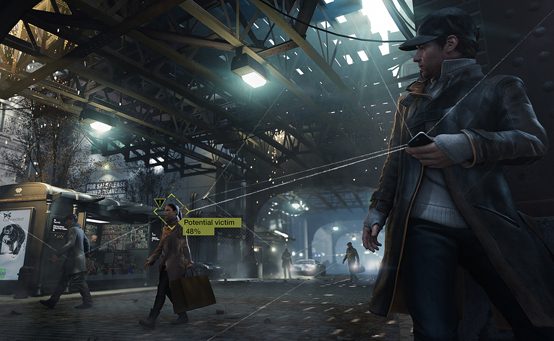 Watch_Dogs’s dark vision of technological totalitarianism is heading to PS3 and PS4, and we were lucky enough to see the first live gameplay demo in San Francisco earlier this week (played on a DualShock 4, no less!). We’ve carefully studied the footage, asked pressing questions, and present you with this breakdown. Read on, then submit your questions in the comments below!

1. Aiden Pierce isn’t your typical videogame protagonist. “Aiden is a man with a dark past who has made questionable choices,” Lead Story Designer Kevin Shortt explained in our first live gameplay demo. Growing up in Chicago, Aiden used his technical prowess to infiltrate bank accounts and access surveillance systems, becoming something of a vigilante. Naturally, these pursuits earned him some powerful enemies on both sides of the law. As you play Watch_Dogs, you won’t be choosing between stark extremes on some binary morality scale, but defining where Aiden resides on much murkier spectrum of acceptability.
2. Chicago isn’t your typical videogame city. We’ve all played open-world action games where cities feel more like a collection of giant painted boxes than a living, breathing urban community. Watch_Dogs’s densely detailed Chicago feel less like a pretty façade and more like a densely populated city. Alleys are riddled with rotting cardboard boxes and detritus and parking garages are honeycombed with gloomy staircases — hack the right device and you may even find yourself peering into the living room of a Chicago citizen.

3. You can hack almost anything. Thanks to Chicago’s Central Operating System (ctOS), the city’s expansive (and invasive) technology is constantly at your fingertips. Take control of a nearby security camera to map out the positions of guards in a well-fortified area, raise a garage door or forklift to confuse and distract your would-be enemies, or — if you’re in particularly dire straits — tamper with the traffic grid and cause a multi-car pileup. These aren’t scripted scenarios, but dynamic and occasionally unpredictable events that can change the course of an escape in a nanosecond.
4. Stealth and no-holds-barred combat are viable options. Aiden is no sedentary computer geek — he’s quite capable of dispatching his enemies using lethal and nonlethal force. The stealthier player will value misdirection and surveillance, using remote cameras to tag and monitor enemy positions while skirting past trouble. Brute-force players will have a wide range of armaments to choose from, but you’ll want to keep civilian casualties in check lest your reputation suffer.

5. Multiplayer and single-player will overlap. Watch_Dogs will feature a full-blown multiplayer mode set in the mean streets of Chicago, though final details are still under lock and key. More intriguing is that multiplayer and single-player will “seamlessly” overlap, an effort by Ubisoft to demolish the wall that has divided single-player gaming and multiplayer for decades. This interconnectivity will extend to a companion experience on mobile devices, though details remain scarce.
6. Voyeurism is more fun than it sounds. Connecting to “FREE PUBLIC WI-FI” is risky business in the real world, so you can imagine what’s in store for anyone foolish enough to hop on an unsecured network in Aiden Pearce’s city. Aiden can activate Wi-Fi hotspots around the city, then hack into any device that connects to it granting him access to, among other things, a webcam on an unsuspecting citizens’ computer. This enables you to score valuable data, but also peer into the strange domestic lives of Chicago’s apartment dwellers.
7. The side quests are novel and varied. Once you hack into a district of Chicago’s ctOS, you’ll find yourself swimming in an ocean of data including the city’s crime prediction algorithms. If you want to go full-on Batman, you can use the crime prediction data to track down potential “victims” from the passers-by on the street, then intervene before their lives are cut short by a hail of bullets or a baseball bat to the head. Other side missions are less grim; one of our favorite was NVZN, an augmented-reality arcade game that tasks you with blasting marauding aliens with ray guns.
playstation gamesubisoftWatch_Dogs