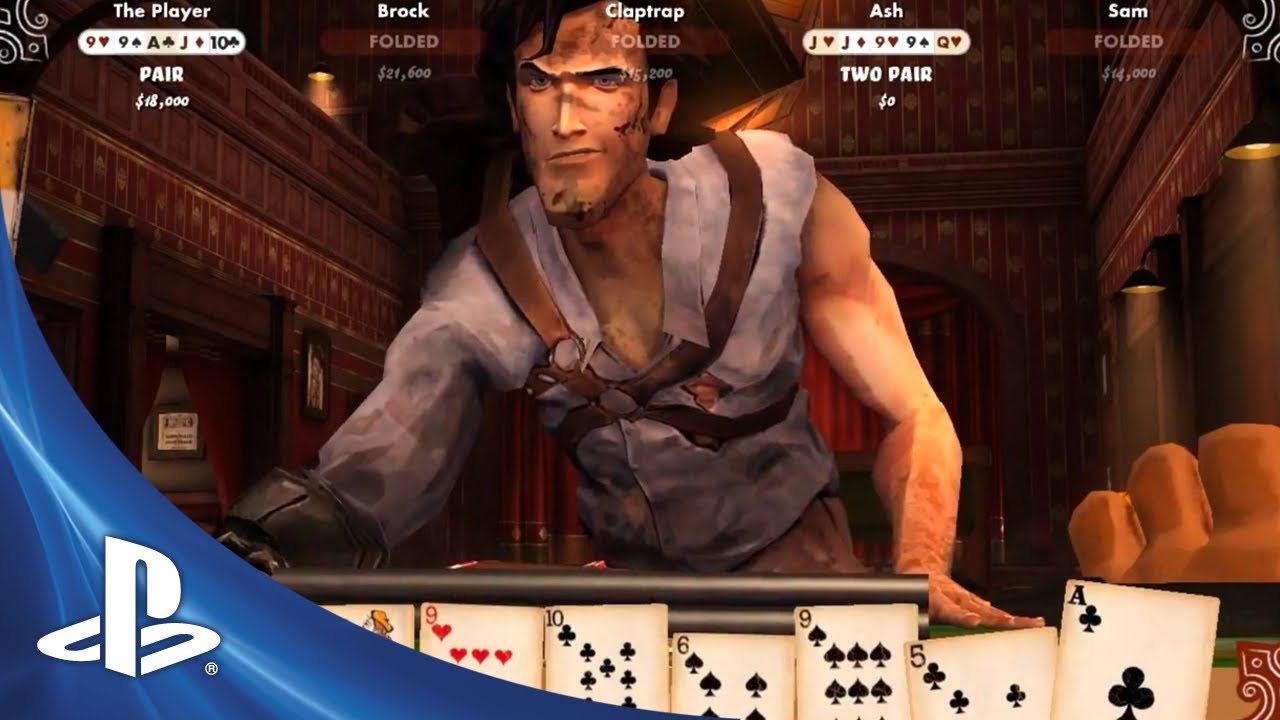 You may be familiar with Telltale’s episodic games like The Walking Dead or the recently announced series The Wolf Among Us, but I’m here today to discuss the latest game that we’ve been working on — Telltale Games’ Poker Night 2. We got some of the best characters from film, television and video games to sit down at our table to play a few hands of Hold ‘Em and Omaha. On top of that, the game is bursting with unlockable content: you can unlock new decks, chips and felts, which can cause the Inventory (the venue for the game’s chicanery) to take on a whole new look. You’ll even unlock items outside of the game. But first, let’s talk about the characters you’ll be facing at the table. To your immediate left looms Brock Samson, the (former) bodyguard to the Venture Family from Adult Swim’s Venture Bros. This guy just oozes cool, but don’t think about stealing his chips, because he has a license to kill and he’s not afraid to use it. He literally plays his cards close the chest, so it’ll be tough to bluff him out of pot, but let him win a couple of hands and his overconfidence could be his downfall. If you manage to unlock the Venture Bros chips, deck, and felt and you’ll get to see Brock on a version of his home turf, clad in his favorite Hawaiian shirt.

Next to Brock we have Claptrap, from Borderlands. He may seem innocent and naïve to the world, but he’s secretly a very skilled poker player, and he’ll take your money if you give him the chance. Anyone on Pandora knows that you never head into combat alone, so Claptrap brought a couple of allies. Flanked by his best buddy Steve (Heyo!), you better hope that his infatuation with GLaDOS blinds him to your poker strategy. He even managed to drag Moxxi along to help serve as bartender. Unlock all of the Borderlands in-game items and the inventory will get the “Moxxxi’s” treatment, complete with music from Borderlands 2. Claptrap may even dress up for the occasion… After Claptrap we have our next competitor, Ash Williams from Army of Darkness. The tournament almost started without him, but we were able to pull him away from killing Deadites to play a few hands of poker with us. He won’t go anywhere without his trusty boomstick and chainsaw, and luckily his prosthetic hand is working well enough (more or less) to handle his chips — and the occasional drink. Purchase the Army of Darkness poker chips, deck and felt, and step into a world of your worst nightmares… or that just might be a fog machine adding to the atmosphere.

Finally, on the far right of table sits Sam, from the Sam and Max series. Max was in the first Poker Night tournament, so Sam had to see what all the fuss was about. While Sam seems to be the calmer of the two, he’s not adverse to waving around his enormous revolver to get a reaction, or a totally inappropriately sized bet. And when he’s wracked with indecision, Max is right there with him at the Inventory, ready to give terrible advice at a moment’s notice. Unlock Sam’s poker items to give the Inventory a noir makeover, with Sam dressed in his best tuxedo to match. New to Poker Night is the addition of the Inventory dealer: GLaDOS. Who knows how she was convinced to run the tournament, but she’s certainly making the most of it by insulting our players at every possible opportunity. When she’s not shrugging off Claptrap’s advances (and who knows if she can keep that up forever), GLaDOS is known for her incisive commentary and her strong tendencies towards murder. She may err on the side of evil from time to time, but she’ll still keep the game honest… no cheating here. If you’re a poker pro, you might just unlock all of her prizes, turning the Inventory into a test chamber right out of Portal.

So what were those out-of-game unlocks I was referring to earlier? Well, as soon you start your second tournament, you’ll see your first Bounty Challenges. Once you pass three challenges, one of your competitors will place a bounty item up for grabs in the next tournament. It could be the Orb from Venture Bros, or Claptrap’s Spike TV award, Ash’s Necronomicon, or Sam’s banjo. Even GLaDOS will throw a Personality Core into the mix if she feels the urge. Win the Bounty Tournament to secure your prize, and with it, you’ll not only earn a new Premium Theme for your PS3, but you’ll also unlock some cool gear in Borderlands 2. You haven’t lived until you’ve played as a Berzerker with Brock’s mullet, or the Asssassin Portal skin. As this is a single-player game, some of my favorite moments occur when our characters are interacting with each other during a hand. We’ve made sure that Poker Night 2 has even more content than the first game, including storylines that extend not only from hand to hand, but across multiple tournaments as well. I’ve been playing the game for months and I still get surprised by new conversations and reactions I haven’t seen before. If you’ve ever played in a regular poker game with your friends, you’ll recognize the type of ribbing banter we have in Poker Night 2, except in this case your friends are celebrities with a taste for violent weaponry.

With all of the new content available in Poker Night 2, we’re very excited for you all to get your hands on it and let us know what you think! The game will be $9.99 when it launches on PSN — we’ll have an official release date soon, so stay tuned!