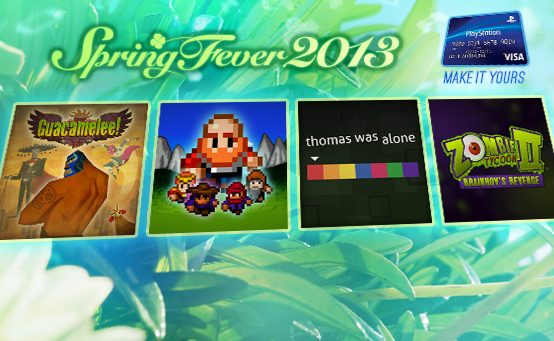 With winter finally coming to an end, it’s time to celebrate the changing of the seasons with our annual Spring Fever promotion on PlayStation Network!

We’re championing independent developers this year, with a new indie title coming each week. You may have noticed during GDC that we are focusing on bringing the best independent games to PSN, and we’re happy to reinforce our dedication to indie developers with this year’s Spring Fever. Each week during the month of April, we will bring a gaming experience from noteworthy independent developers, such as DrinkBox Studios and Frima Studio. Additionally, each title features Cross-Buy functionality for PS3 and PS Vita, and PlayStation Plus members get at least 20% off each title during launch week!

Spring Fever also offers sales on a number of games and add-ons from popular franchises each week, as well as some great deals on movies themed to each week’s sale, which you’ll learn more about in the PlayStation Store Update posts each Tuesday.

Check back each Tuesday for more info about that week’s releases. Let us know which indie games you’ll be downloading in the comments, and enjoy this year’s Spring Fever!