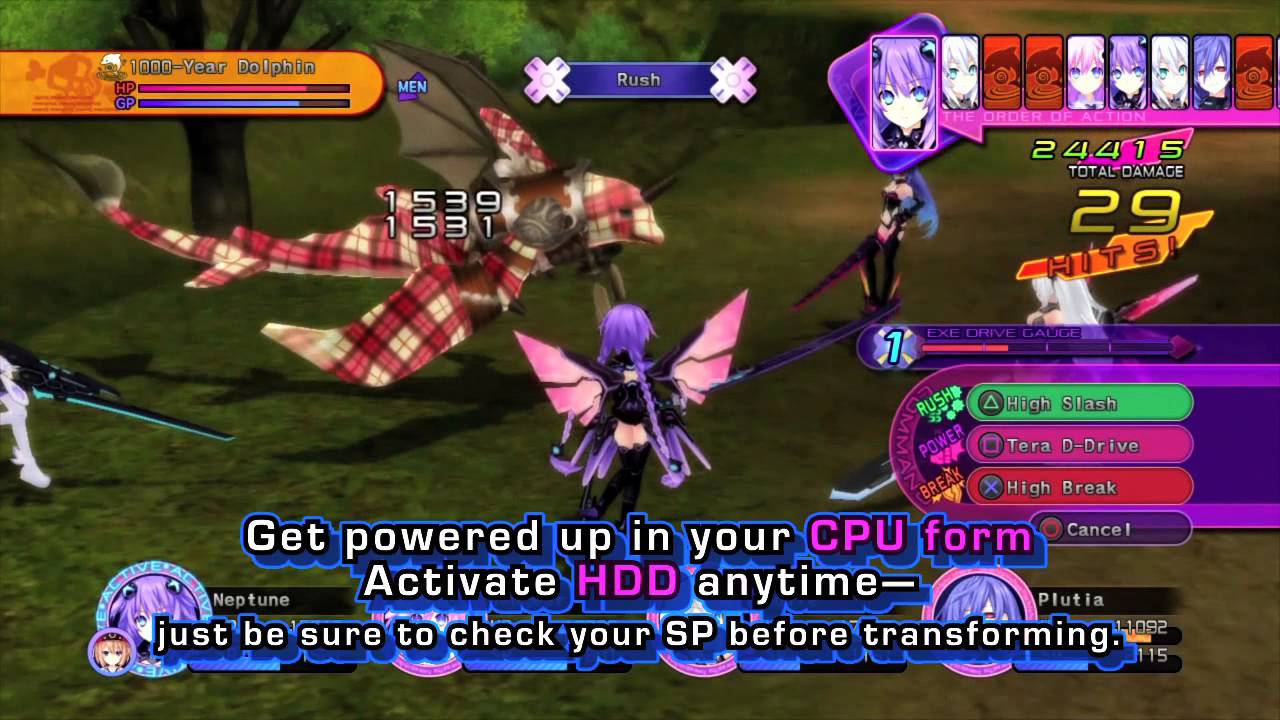 Greetings, doods! How goes things? Ryan from NISA here, dropping by to let you know that Hyperdimension Neptunia Victory releases today in North America exclusively for PlayStation 3! It’s time again to join the exuberant and extremely awesome Neptune and her gaggle of CPU goddess buddies for a brand-new adventure in Gamindustri!

For those new to the Hyperdimension Neptunia series, it is a turn-based comedy RPG set in a world called Gamindustri, which is governed by different CPU Goddesses. Each goddess is actually a living and playable personification of the different video game consoles that we all have come to hold dear to our hearts. As the player, you take the role of the main character, Neptune, and along with a whole slew of strong female counterparts, it’s your job to make sure that order reigns supreme in Gamindustri!

So what’s putting Gamindustri at risk this time around? Victory begins several years after Neptune’s sister Nepgear prevented Arfoire’s (baddie from previous Neptunia games) revival. The CPUs and their younger sisters have been enjoying their quiet lives for a while… Then one day, Neptune is sent to another dimension. This new dimension feels very much like her own… except it has only progressed to the Gamindustri of the 1980s. In this dimension, a group of villains calling themselves the “Seven Sages” are trying to create a world free from the rule of CPUs. With help from old and new friends, including that dimension’s CPU of Planeptune—Plutia—Neptune begins her quest to protect a totally different Gamindustri.

Let’s talk about game mechanics! There are a bunch of new features in Hyperdimension Neptunia Victory that were absent from the previous titles. One such mechanic is the EXE Drive Gauge, which is essentially a meter that fills up as you and your party members attack the enemy or get attacked. It lets you access incredibly powerful super moves, but if you become close friends with the other CPUs, you can even use it to access their “Final CPU Form,” which turns them into weapons for Neptune to bash the enemy with! Some friend, huh?

Besides the EXE Drive Gauge, the game also incorporates “Challenges” for you to accomplish. These are separate from Trophies, and will give you stat bonuses or unlock bonus voices when you complete them. For example, “I get knocked down” is a challenge that counts how many times a character falls in battle. Die in battle 10 times and that character will get a small stat boost. Others involve the amount a character is healed in battle, the number of times a character jumps on the field, and many, many more. It’s a great way to build your stats aside from grinding levels, so we encourage you all to challenge yourself to become the best fighter in Gamindustri!

Thank you all for hanging out to hear about Hyperdimension Neptunia Victory! We have a lot of DLC planned for this title, so please stay tuned as we announce more of that on our website! We had a blast working on this title, and we hope you will enjoy it as much as we do! I’ll be back on PS.Blog again soon to talk about our new title, Time and Eternity, which is set to release exclusively on the PS3 this summer. See you soon, dood!