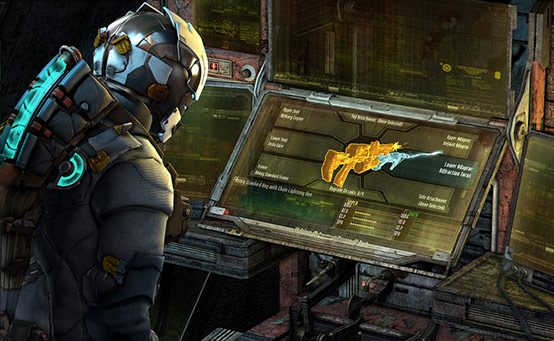 A couple weeks ago, we asked you for Dead Space 3 questions, which we’d forward along to Visceral Games for a future Q&A. Starting at 12:01AM Pacific time tonight, you’ll be able to download the game on PSN in North America, and it will be available at retail tomorrow, so we think now’s a good time to revisit that.

You mobilized and responded to our request in full force, so we had plenty to ask about when we tracked down John Calhoun, Associate Producer of Dead Space 3. When we finally caught up with him, we politely asked him a few of the questions you had, and he was happy to oblige. Read on to find out how Visceral kept co-op scary, what Isaac’s new locomotive abilities mean for the game, and what kinds of new horrors you’ll face when Dead Space 3 launches tomorrow.

Have a @deadspace 3 question? Tweet us, include the hashtag #DeadSpace3PS3 and we’ll pose your questions to @visceralgames in a future Q&A

@tehSeruh: What was the inspiration behind making Dead Space 3 more action-based than the previous games? For example, taking cover, rolling, and universal ammo.

John Calhoun, Associate Producer of Dead Space 3: The overall pacing of Dead Space 3 – that is, the ratio of high intensity action sections and lower intensity suspension moments – is actually comparable to the gameplay that was established in Dead Space 1 and 2. We don’t really consider DS3 more (or less) action-based than previous games. That said, we did make Isaac a more capable protagonist in this game, including his ability to crouch and take cover. These features were added to level the playing field between Isaac and Dead Space 3’s new human enemies, who are tactically advanced and could otherwise overpower the player.

@Jeremy_LaMont: Is horror less horrifying with two? How do you design a scary two-player game from the get-go?

“There are times when Carver will see or hear things that Isaac does not.”

JC: The secret to keeping DS3 scary is twofold: know your game’s strengths, and don’t be boxed in by conventional thinking. Regarding the former, one of our franchise’s strongest areas has always been audio. We turned to our sound designers a lot to ensure that the game remained atmospheric and thrilling no matter how you choose to play. We also decided to think outside the box about what makes a co-op game tick. Why should it be less scary with a friend? It was this thinking that led us to develop the “asymmetrical dementia” moments you’ll occasionally experience in co-op. These are times when Carver will see or hear things that Isaac does not, which we hope will start a dialogue between players about what’s real, and what isn’t. Not knowing if you can trust your partner is a great technique to keep things tense in co-op!

@EricFordham: Is this going to be the concluding chapter for Isaac?

JC: If you’re fishing for spoilers, you won’t get them from us! We’re staying focused right now to make sure DS3 is the best game it can possibly be at launch. And while there is a lot more story to tell in the Dead Space universe, we can’t reveal what this may or may not mean for Isaac.

@the1PARiAH: Will there be additional missions for single player and/or co-op via DLC?

“These additional areas are some of the most challenging – and rewarding – levels in DS3.”

JC: We haven’t made any DLC announcements at this time. However, we would like to share a little-known but important fact about DS3 that’s related to this question. In the course of playing the main campaign, in either single-player or co-op, you may encounter barracks, ships, or underground labs that are entirely optional sections of the map for you to explore. These additional areas make up a large chunk of the game’s content, and are some of the most challenging – and rewarding – levels in DS3.

@JAlvar_5495: What type of new Necromorphs are there in the game?

JC: We have the Waster, a humanoid Necromorph with a variety of transformation states, depending on how you dismember it. The Feeder is a smaller creature that is attracted to light and sound; you can sometimes avoid it, or face it head on. But be warned – they tend to attack in packs when threatened. The Shambler is an infected human corpse that is able to haphazardly wield a gun. Don’t get too close, or it may infect you, too! These are just a few of the new Necromorphs you’ll discover.

@MaLTRaiN: What bonuses will we get if we preorder the game?

JC: There are a couple preorder bonuses that we think are pretty cool. All preorders will receive the Limited Edition, which contains codes for the Witness the Truth and First Contact weapon and suit packs. Each pack contains an exclusive suit and weapon, built from customized parts that are not available anywhere else in the game. GameStop preorders also receive the custom-skinned and upgraded EG-900 SMG, while Amazon customers will receive the similarly awesome Tesla Enervator weapon.