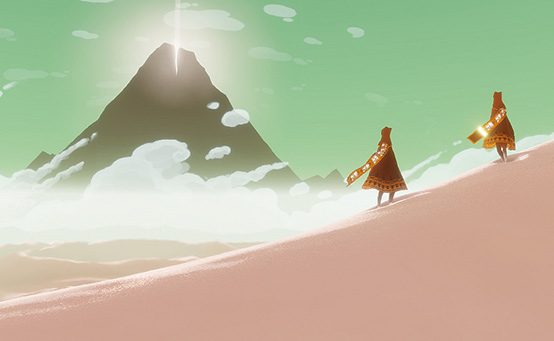 As 2012 prepares to come to a close, many of us have taken a step back to reflect on the amazing game experiences we’ve enjoyed throughout 2012. One game in particular stands out above the rest: Journey. Since it was announced in June two years ago, critics and fans alike have been praising Journey’s heartfelt narrative, incredibly memorable visuals and emotional score. Once it launched back in March, it quickly garnered the attention and admiration of many, ultimately resulting in three big wins at the recent 10th Annual Spike TV Video Game Awards, including Best PS3 Game, Best Independent Game and Best Original Score. In addition, Journey, still the fastest-selling PSN game of all time, has earned the first-ever Grammy nomination for a video game in the Recording Academy’s 55-year history, in the category of best score soundtrack for visual media, placing us in the ranks of legendary composers John Williams and Hans Zimmer.

Journey also recently received the following nods so far this year. And while it’s such an honor to just be nominated for such prestigious awards, I wouldn’t be surprised to see this list grow even more over the course of the upcoming months:

Today, on behalf of SCEA and the entire PlayStation Nation, I’d like to extend my congratulations to the extremely talented development team at thatgamecompany, including Journey composer Austin Wintory, whose brilliance and creativity has truly inspired us all. Thank you to the team at Santa Monica Studio and everyone else that has had a hand in bringing this transcendental and astonishing game to life. Journey, for many, remains one of the most amazing game experiences of our lives — one that we may never forget.

Please join me in congratulating the team by sharing your most memorable Journey moment.