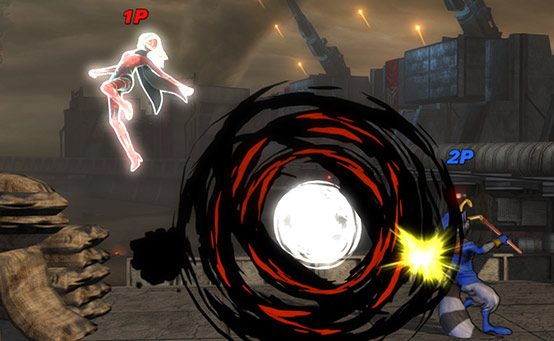 It’s been a couple of weeks since Seth let the Kat (and the Emmett!) out of the bag, so I thought I’d stop in and give you guys some insight into the philosophy behind putting these two great characters into PlayStation All-Stars Battle Royale. The team and I attended an event at the Santa Monica Studios last night where we gave media attendees the first hands-on look at our new DLC, including the unveil of a brand new level, so I wanted to give you all a sneak peek at some of their moves and show off our newest level, Fearless! It’s all exciting stuff that I’m eager to tell you all about, so let’s get started.

Gravity Rush landed on PlayStation Vita earlier this year, introducing us to Kat. Her tremendous gravity powers, combined with a really charming personality made her an instant fan favorite, and thus an obvious candidate for PlayStation All-Stars. When looking at Kat’s play style in Gravity Rush two things immediately stood out to us: her reliance on aerial mobility and her arsenal of powerful kick-based attacks. We felt it was important to use these two elements as the cornerstone of Kat’s play style, and as such, her move set in PlayStation All-Stars makes liberal use of both.

For example, Kat doesn’t have a double jump! Instead, she relies on her Gravity Dash, an eight-direction mini-flight mode to move through the air. This cancellable move affords Kat an unprecedented degree of air mobility and attack potential.

Another example sees Kat using her powers of gravity manipulation directly against her rivals. Kat creates gravity wells, which draw in nearby players via her Gravity Attraction attack. Kat’s playstyle is such that she’s most effective when close to her opponents, and while her air mobility and varying kicks allow her to get in close pretty well, Gravity Attraction lets her pull her opponents directly to her. Success with Kat will require players to use all of Kat’s abilities in harmony, and Gravity Attraction plays a key role in accomplishing that.

I also want to give you guys a look at one of Kat’s Supers. Kat’s Level 1 Super, Gravity Squeeze, is based on her finishing attack so often used to dispatch the bosses in Gravity Rush. Kat leaps at her foe, stealing a giant orb of energy. As she destroys the orb, her victim explodes. If anyone is caught within the resulting blast of energy, they explode too! This is a very powerful Super, but one that will require Kat players to be clever in order to score maximum points.

This year also saw the release of Starhawk, a game set in the wild galactic frontier where the quest for Rift Energy comes with a terrible human cost. Starhawk’s main protagonist, Emmett Graves, is a man all too familiar with that cost, his body forever transformed by exposure to the toxic Rift Energy. Emmett makes wide use of varying weapons based on advanced technology, most notably through Starhawk’s Build & Battle system. It’s this particular mechanic that made Emmett such a compelling character to the PlayStation All-Stars Team.

The first of Emmett’s two most important Build & Battle moves is his Aerial M.A.W Rocket Launcher and Tetranite Grenade Bunker move. This allows Emmett to call down a bunker that when used, completely changes his weapon loadout. The Rocket Launcher gives Emmett access to a long range, powerful, aimable projectile. The grenade launcher provides an equally devastating attack, both in terms of AP generation and versatility, and is used primarily to stop the advancement of opponents in front of Emmett. Both weapons are somewhat slow moving, but more than make up for it in terms of sheer firepower.

The second, but equally important Build & Battle move that I want to tell you about is the Union Shotgun and R-Secs Proximity Mine Bunker move. Like the previous Build & Battle move, a separate bunker is brought in from low orbit, this time with ample shotgun and mine ammunition. Choosing this loadout supplies Emmett with devastatingly quick-hitting, short-range firepower via the shotgun as well as excellent space control through persistent mines. Neither weapon offers the range of the rocket launcher or grenade, so good Emmett players will need to be able to master alternating between both loadouts depending on the situation.

What better piece of anti-personnel weaponry is there in the Starhawk universe than the amazingly versatile Hawk? As the ultimate Level 3 Super, Emmett takes control of a Hawk in mech configuration, and is able to chase down his opponents with terrifying machine gun fire and tricky floating mines. And when all else fails, Emmett can transform the Hawk into flight mode and rain down a final hail of bullets that’s tough to survive. It’s an impressive Super, befitting of a universe filled with amazing technology.

Before I go, I want to give you all a look at what we have planned for our newest level, which during development has earned the codename Fearless. Fearless is a mash-up level that sees the fantasy world of Heavenly Sword meet the futuristic race tracks of Wipeout. In the short time we’ve been working on it, Fearless has become one of the team’s favorite levels, and we think you’ll see why.

The action in Fearless starts out atop a high column supported by gigantic ropes, creating a scene pulled straight from the world of Heavenly Sword. Our players will battle it out on this high column under the watchful eye of the forces of Bohan. It’s a medium-sized space, free of any platforms, and offers some of the most uninterrupted calm you can find in PlayStation All-Stars.

In the distance though, the hum of anti-gravity racing can be heard, and over the course of the match, a familiar floating race materializes. Soon, the battle is interrupted as stray fire from the famous racing ships of Wipeout hits the fighting column, and our fighters come crashing down into a new, more vertical part of the level, the race track cutting straight through the fight space! Any fighter unlucky enough to get knocked into the track or in the way of one of these terrific ships will pay the cost – literally – by receiving a hefty AP penalty. Knowing how to best leverage your character’s moves while avoiding the dangers of the race track are key tools to mastering your fear, and mastering Fearless.

We’ve still got a long way to go to complete Kat, Emmett, and our new level Fearless, but I hope you enjoyed this early look into where things are going. We think these new characters and level fit well into the gameplay already established in PlayStation All-Stars, while at the same time expanding the notions of what’s possible within our fight system. We can’t wait for you guys to get your hands on this stuff early next year, but there’s still quite a bit of work left to do before we can call anything finished. With that said, I’ll get back to work.