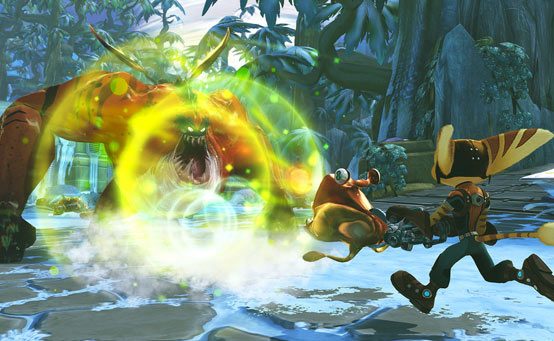 Fans of Ratchet & Clank, today is the big day! Ratchet, Clank and Captain Qwark embark on their newest adventure, Ratchet & Clank: Full Frontal Assault, which is available today for the PS3 system at retail and on PlayStation Store for a MSRP of $19.99!

As a special launch day treat, we’re sharing a few pieces of concept art which inspired the look, characters and environments that you’ll see in the game. We hope you enjoy checking them out! This fun-sized adventure is one of the best values we’ve ever offered, featuring a campaign you can play single-player or in co-op (split screen or online). It’s classic Ratchet & Clank gameplay with a base defense twist. Even after you play it once, you’ll want to try again to improve your scores and times! On top of the campaign, Ratchet & Clank: Full Frontal Assault has a new multiplayer mode that you can play 1v1 or 2v2. We’re really proud of it, and we’ve been working hard to bring additional skins as well as new bonus multiplayer maps to the game, and you can expect more details in the coming weeks.

For those of you who also own a PlayStation Vita system, the game supports cross-buy, cross-save and competitive multiplayer cross-play. If you purchase Ratchet & Clank: Full Frontal Assault for the PS3 system, you’ll be able to download the PS Vita version at no additional cost when available in January 2013.