Disney Epic Mickey 2 – A Game for Everyone, to the Power of Two 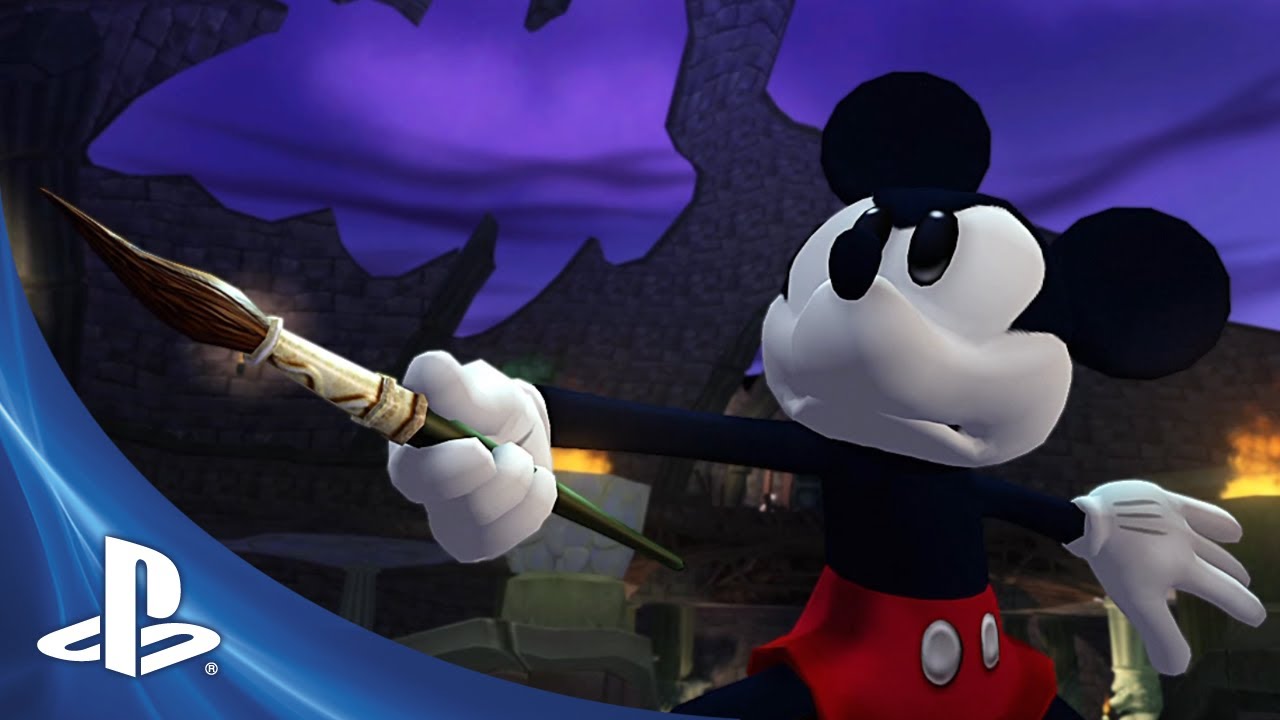 In November 2010, Disney Interactive released Disney Epic Mickey, a game my studio created featuring Mickey Mouse in his first videogame appearance after many years away from the interactive screen. The opportunity to work with a character as well-known as Mickey would have been incentive enough for us, but Disney offered us something else – the chance to bring Walt Disney’s first cartoon star, Oswald the Lucky Rabbit, back to the world after 80-some years.

The Junction Point team jumped at this chance to play a part in Disney’s history, creating a world and a story that honored the past while resolutely looking toward the future. We started by creating a world called Wasteland, repository for all of Disney’s forgotten creative efforts — characters cut from films, rides retired from theme parks, toys and licensed ephemera from years gone by — and then dropped Oswald there, as the first forgotten character. We had Mickey Mouse, one of the most decidedly UN-forgotten characters in our world inadvertently create a disaster and a monster that imperiled Wasteland. We trapped Mickey in Wasteland and charged him with saving the world and redeeming his “brother,” Oswald.

How, you ask, does any of this look toward the future? What I’ve just described seems like a simple, classic narrative set in a dark, but exclusively, nostalgic world…

Well, the “future” part comes, first, from the medium Junction Point works in, video games, then from the goals we set for ourselves and finally in the approach we took to achieve those goals.

Video games are, without question, in my mind, the medium of this century in much the same way movies were the art form that defined the last. Walt Disney was always at the bleeding edge of innovation in his day, adopting sound, color, stereo, robotics, television and more before most of his peers and competitors saw their potential. In bringing Disney’s creations to games, we felt a part of his constant striving to adapt to changing times. In that alone, we at Junction Point felt we were pretty forward-looking. But we knew we had to go further, as Disney himself surely would have.

Our game had to offer players something other games didn’t, couldn’t or wouldn’t – something entirely new. For us, that something was Paint and Thinner. More precisely, we wanted to use those things – Paint, to allow Mickey/the player to draw and create things in the game world, and Thinner, to allow Mickey/the player to erase and remove things from the world. All game challenges would be solvable through creation or destruction, and the choice would be the player’s, always.

This idea, that players would get to decide how to interact with the game world, how to solve game problems, has been making inroads in video games for years now, but never in the context of Platforming or Action-Adventure games, and Disney Epic Mickey games fall squarely in those genres. For lovers of these game styles, the opportunity to decide how to achieve their goals, how to deal with enemies, how to define the word “hero” for themselves through their minute-to-minute playstyle choices would, we hoped, be pretty revolutionary. In a sense, by dynamically changing the world, each player could tell his or her own story.

But even beyond that, beyond the genre mash-ups and game mechanics, the Junction Point team set itself a goal that would really set us apart from the pack in the world of games: Rather than targeting a specific audience (“core gamers” or “teen boys” or “tween girls” or “adult non-gamers” or anything like that), we wanted to make a game with the same sort of broad appeal as Disney and Pixar classic films. In other words, we wanted to make Disney Epic Mickey something we grandiosely called “a game for everyone.”

There’s some evidence that we did just that. Look at who played the first Disney Epic Mickey game and you see an audience that’s about half over 18 and half under 18, and split about evenly between males and females. Pretty cool, but here we are, two years later, releasing Disney Epic Mickey 2: The Power of Two, and the obvious question is, how do you top that? How do you follow up a game for everyone? Well, read on…

Obviously, we wanted to learn from our experience on the first game.

In addition to learning from our experience on the first game, we had to offer players something new – several “somethings,” actually.

We started with the obvious stuff – new lands and levels to explore, and some new forgotten characters. We crafted an all-new story that had some serious meat on its bones. In Disney Epic Mickey, we didn’t settle for “save the kidnapped princess” or “kill the monster to save the world.” We created a story framework that asked players to think about how important family and friends were to them and we asked them to answer that question, to define heroism, for themselves through their actions. In Disney Epic Mickey 2, we built a story around a different question – is everyone redeemable or is there evil in the world so profound it’s beyond redemption? We did this by bringing back the Mad Doctor, a villain in the first game, but now claiming he wants to help save Wasteland from new danger. Do you believe him…?

We made the surprisingly controversial call to use songs to communicate critical story elements and to allow characters to reveal their emotions. That’s pretty standard in theater, on film and, recently, on television, but it’s pretty radical in games – and with our traditional, non-interactive approach, we’re not taking too many chances this time around. (Keep your eyes open for some serious interactive musical comedy craziness in the future! I have wacky plans…)

But there are two new things in DEM2 that really raise the bar over the first game.

First, we added Oswald AI, so instead of just being a character you see in cinematic story moments, everybody’s new (or soon to be) favorite Disney rabbit is there with Mickey – with the player – every step of the way. And the really cool thing is that, at any point, a second player – a friend or family member- can pick up a controller and take control of Oswald. Co-op play puts you in control of Oswald’s helicopter ears… his detachable “boomarmarang” and his electrical remote control. Working together in 2-player mode, Mickey and Oswald can go places and do and collect things that aren’t possible in single player. And two players negotiating to tell a story together is a unique experience, I’ll tell you!

Finally, where the first Disney Epic Mickey game was available on only one platform (which we won’t name here!), DEM2 is available to PlayStation 3 fans. All of the game’s assets – character models, maps, textures, visual effects, and so on – were created specifically for HD and (I’m prejudiced!) I think the game looks terrific on PS3. And while we support the DualShock 3, the PlayStation Move controller offers PS3 owners an “exclusive” on the combination of HD graphics and gestural controls. And on top of that, when we had the hosts of ABC Television’s Good Morning America try the PS3 game on the air before the game launched, they discovered a new play mode with the Move even the team didn’t think of – a four player mode, with one player handling Mickey’s movement and a second handling Paint/Thinner use, while two other players split movement and abilities for Oswald! That was awesome – the ultimate expression of players creating their own experiences, telling their own stories through play.

That’s what Disney Epic Mickey 2: The Power of Two is all about. Each and every player tells his or her own story, crafts his or her own unique experience, does what he or she thinks is fun and cool and appropriate when faced with challenges the Junction Point team set up. Games are – or should be – about you showing how clever and creative you are, not how clever and creative we are at Junction Point. So what are you waiting for? Get creative. Start playing! And be sure to grab a friend or enlist a family member – Mickey and Oswald are better together than they are alone, and you will be too!

note: Warren will be online soon to leave comments replies