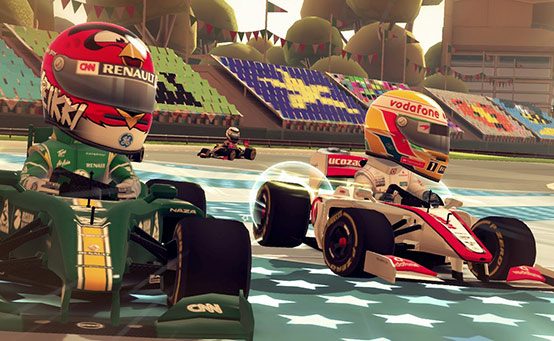 Codemasters are well known for creating racing games with lots of depth, and in many ways our brief for F1 Race Stars (out on PS3 today) was no different. When designing the game’s structure we intended to provide ongoing variety as crucially as the instant appeal you’d expect from a “karting” game.

Firstly, along with the typical race event, we have introduced a host of other modes of racing. There are eight in total, each requiring unique skills and strategy — some will feel instantly familiar to gamers, and some will feel entirely fresh and unique.

For example, we’ve introduced Refuel mode – based on the principles of fuel strategy in F1, where fuel re-stocks are placed around the track, but carrying less fuel means more speed. Or Trophy Chase mode, a smash and grab event where players collect trophies, found both on the track and stolen from other drivers. Gamers should feel instantly at home with other modes such as Sector Snatch mode, where players can own sectors of each track by setting the fastest split time though it, or racing in a classic Elimination mode.

Modifiers can be applied onto any of these eight race modes to really mix things up. For instance, Flip Flop handicaps whoever is currently leading the pack by reversing their controls, Project Orion gives drivers unlimited boost from boost pads until they let go of the accelerator, and then there’s the classic Mirror Mode which flips the track left-to-right.

And even on top of that, events are wholly configurable. You can set the cars’ damage mechanics, which power-ups are included in the event’s roster, and even whether you wish to play in teams.

From these simple tools, events can be generated to suit all moods and scenarios. For example, sliding around a wet Brazil trying to smash and grab trophies with the Monsoon modifier applied is great party gaming. Or choosing Fragile cars that take damage from all collisions, with No Power-Ups on Monaco presents the ultimate pure driving skill challenge. Various combinations are available in the game’s Career mode, but it only gives a taste of what’s on offer. Putting all of these options in the players’ hands, they can experiment and tailor the gaming experience to suit them – and maybe even show us designers up for creativity.