5 Tips to Make the Most of the Need for Speed Most Wanted Demo, Out Today on PSN 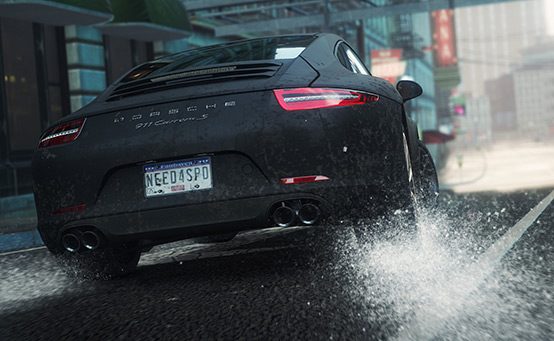 Need for Speed Most Wanted is now out, and today we’re celebrating 1 million Autolog users with the release of the PlayStation 3 demo. We’re bringing PlayStation.Blog the inside track on what new players should look for, and how to dominate the Most Wanted demo.

Making a demo for a large-scale open world game is a major challenge. We wanted to put together a snapshot of Most Wanted’s blend of exploration, connected competition and explosive, over-the-top police chase action to give you a taste of what to expect from the main game.

The action takes place in a locked down version of the city – you get to play in Fairhaven’s Downtown and Four Bridges districts. These areas are loaded with billboards, jumps, speed cameras and hidden cars.

The game kicks you off in Aston Martin’s beautiful V12 Vantage. Race to the first location, and we’ll bust out the classic Porsche 911 Carrera S.

Explore the city further, and you’ll find a “Jack Spot” with Audi’s flagship R8 Spyder. Park and hit triangle to instantly switch. It’s as easy as that. In the main game, it’s the same deal but on a grand scale. There are over a hundred Jack Spots to locate and discover cars.

Add a friend to Autolog, and we’ll bust out the final car of the demo, the fan-favorite Ford Focus RS500. And you definitely want to do this. Not only because the RS500 is a truly pimp car, but because just like the full game, our demo is all about Autolog.

Most Wanted is all about Speed Points. Everything you do in the game earns them — from online multiplayer, to escaping the cops, to cruising the city looking for cars and records to beat. Earn more than your friends to reach the top of your Most Wanted List.

Here are five easy tips for you guys to make racking up the maximum 50,000 demo Speed Points a breeze.