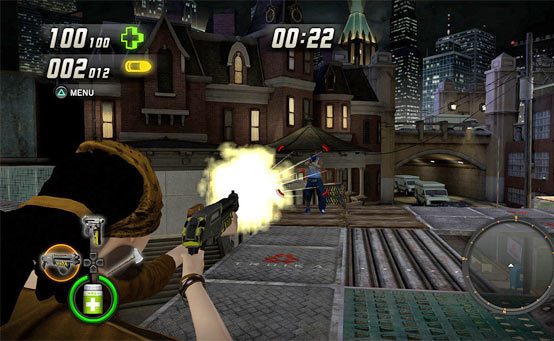 Uproar is a frantic and fun third-person shooter exclusive to PlayStation Home. Why play cover to cover when you can free roam? Uproar is the first avatar based free-roaming third-person shooter in PlayStation Home and it pulls out all the stops to bring you an experience unlike anything seen on the platform before. The game is extremely easy to jump into and play, the controls and gameplay will be instantly familiar to anyone who has played a third-person shooter before, however there are some very interesting tweaks to spice up the gameplay and keep it all feeling fresh. We think it’ll give you and your friends countless hours of fun battling it out within the Uproar Arena.

Pick your side.You can choose to fight on the side of either of our two gangs; the Outlaws or the Swyfts, as they battle for respect within the Uproar Arena. Each gang has its own unique set of clothing available within the inventory screen (all of which is wearable outside of the game), as well as a set of gang booths in the Uproar Lobby to hang out in with your fellow gang members and chat before you go and battle it out in the Arena. Be sure to let your rival gang know what you think of them with the full range of taunts available for use within the Arena!

Uproar anywhere! Uproar could turn up in any Home Space at any time, offering a brand new selection of maps to take the fight to. The first of these spaces to feature the excitement of Uproar will be the Action District. You can experience the Action District in ways you never could before, by clambering over rooftops and jumping in to the previously unreachable car park. The Uproar Arena itself is also a great location to shoot your friends in, with several maps of varying sizes, with unique obstacles and differing numbers of health and ammo pickups.

Full avatar customization. With its intuitive inventory system, Uproar presents a wealth of customization options to explore, allowing you to play according to your own style. Equip a primary weapon, secondary weapon, melee weapon, Serum, taunt and the clothing to boot, and head out to the battlefield. The innovative inventory system allows you to preview, purchase, rent, compare and gift everything all in one very convenient screen. It makes picking the right equipment and looks for your avatar a breeze, and even allows you to do it mid-battle if your tactics change. The rental system is also fantastic for trying different weapons before committing to a purchase. The speed and ease with which this inventory can be used helps keep the battles fast paced, while still allowing you full customization options at any point in the game.

True free-to-play. Every single weapon and Serum that is available within Uproar can also be unlocked for free through the use of unlock keys which you obtain simply by levelling up your avatar. On entering the game every new gang initiate will be given the free starter pack, which contains the Commando Rifle, Big Jonesy Pistol, Baseball Bat (complete with nails), Super Strength Serum, “Come at me bro” taunt and the standard issue set of initiate clothing. These are a great set of tools to get you started within the Arena, but be sure to try out everything that the game has to offer in the inventory screen.

The firepower. Uproar features a wide variety of weapons to suit all play styles. If you want to get right into the action and up in the face of your enemy, then the Shotguns will be perfect for you. However, if you prefer to play a bit more cautiously and take your enemy out from a far, then there’s also a range of Heavy Rifles to choose from. We’ve also included a great selection of melee weapons to smack your enemies in the face with when things get chaotic. The variety of weaponry on offer will make sure that things never get stagnant as every weapon has its own set of strengths and weaknesses which you can play to in order to match your personal play style, team strategy and your opponents’ tactics.

Take time to chill. Tired of killing people? We don’t know how that could be, but if you fancy a break you can always chill out in the Uproar Lobby and speak to likeminded rioters. Check out who’s ruling the Arena on the leader boards, read up on the History of the Uproar Arena and its owner Troika at the information point or check out what’s showing on the Jumbotron. If you feel the need to get back in the Arena, it’s never far away.

Super human. The Serums are a fantastic addition to Uproar that really help make the gameplay feel fresh and fun. Drinking one of the many Serums on offer will give you a short term boost to you character in a particular way. Sample the Speed Boost Serum for a temporary rush of speed to dodge bullets around the Arena or drink a Health Boost Serum to give you a short term increase in health before heading in to the fray. Again, access to Serums can be unlocked through just levelling up or by killing your helpless opponents.

Check out Uproar’s blog page for extra content, including a full back story and several more videos and images of the game. You can also follow Lockwood on Twitter or Facebook if that’s more your thing!

Reach your full psionic potential with these Scarlet Nexus gameplay tips, out now