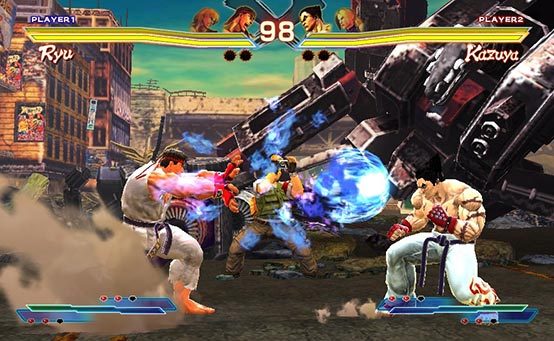 I recently spent some hands-on time with a near-complete version of Street Fighter X Tekken for PS Vita, ahead of its October 23rd PSN and retail launch. And I’ve gotta say, it’s the spitting image of its PS3 bigger brother with big, bold characters and detailed backgrounds running at PS Vita’s native screen resolution. But peer underneath those pretty graphics and you’ll find a wealth of new extras that make this the definitive version of Capcom’s crossover fighter.

The game comes equipped with every DLC fighter from the PS3 version — including PlayStation exclusives Cole McGrath, Kuro, Toro, Mega Man and Pac-Man, of course — as well as alternate costumes for every character in the base roster. Another nice touch is the ability to customize your character’s costume color, then share it with friends via PS Vita’s integrated geo-social app “near.” It’s also worth noting that any DLC costumes or Gems you purchased for the PS3 version will port over to the PS Vita version at no extra cost.

PS Vita’s front touchscreen is leveraged in several ways, most notably to create virtual buttons on the screen that you can reposition, resize, and assign to multi-button inputs — useful if you have a tough time pressing several buttons at once for some of the more elaborate moves.

A new “KO Monument” feature collects mementos of combatants you’ve defeated, while a new “Burst Kumite” single-player mode puts you against an endless battle of CPU opponents, including ghosts taken from multiplayer matches — handy if you’re not near a WiFi or 3G connection. The Gallery mode offers up the expected cinematics and soundtrack listening options, but also introduces an augmented reality feature that enables you to drop SF X Tekken characters into photos you take using your PS Vita.

Of course, you’ll be able to beat down PS3 and PS Vita combatants alike over WiFi thanks to the game’s full support for Cross Play. And if you happen to own SF x Tekken for your PS3, you can also tap into Cross Controller support and control the PS3 version using your PS Vita — handy, if you’re tapping into those multi-button touchscreen shortcuts, or if you just want to look extra cool.

There are a range of small tweaks to the various arena designs — some daytime stages are now set at night, and vice-versa. And if you squint hard enough, you’ll spot some new visual Easter Eggs, such as a cameo from Tekken’s affable velociraptor Alex in the Jurassic Era Research Facility.