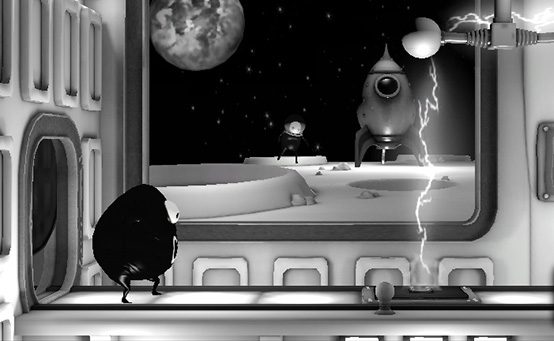 Escape Plan‘s Director’s Cut DLC for PS Vita is out today, with new content for everyone! Patch 1.04 also goes live with the new direct controls, and we’re adding new visual stimulation for you costume fans.

After working on the project for over a year we decided to bring back some of our favorite level designs, and needless to say, we love a challenge! This is why the Director’s Cut pack is filled with the most devious and evil tricks that Bakuki ever conceived. Including the Slap-a-ma-tron 9001, and a butt-ton of mind-bending puzzles.

Continuing tradition, we have added four new costumes to the dressing room. Dress Lil and Laarg in a new spectrum of costumes such as Timeless and Lost Clause, with Halloweeners and I’m with Cupid unlocked by playing through the 21 Director’s Cut levels.

We’ve also added a new poke control to allow the player to stop the selected character with the ease of a button, as well as adding the directional pad to start the character’s march. Using your feedback we’ve done our best to get the game to be yours as much as it is ours. Let us know what you think!

Everyone will get the Timeless and Lost Clause costumes with Patch 1.04, as well as the new controls. However, only Director’s Cut buyers will get access to the new levels, trophies and remaining costumes.

Escape Plan Director’s Cut will be available in the PlayStation Store for $4.99 with today’s update.

For those who haven’t experienced the touching adventure of Lil and Laarg, you can play through 16 of the zany levels of the original game by downloading the Escape Plan Demo currently available on PSN. Be sure to try it out and, as always, provide feedback in the comments below. We love hearing it!