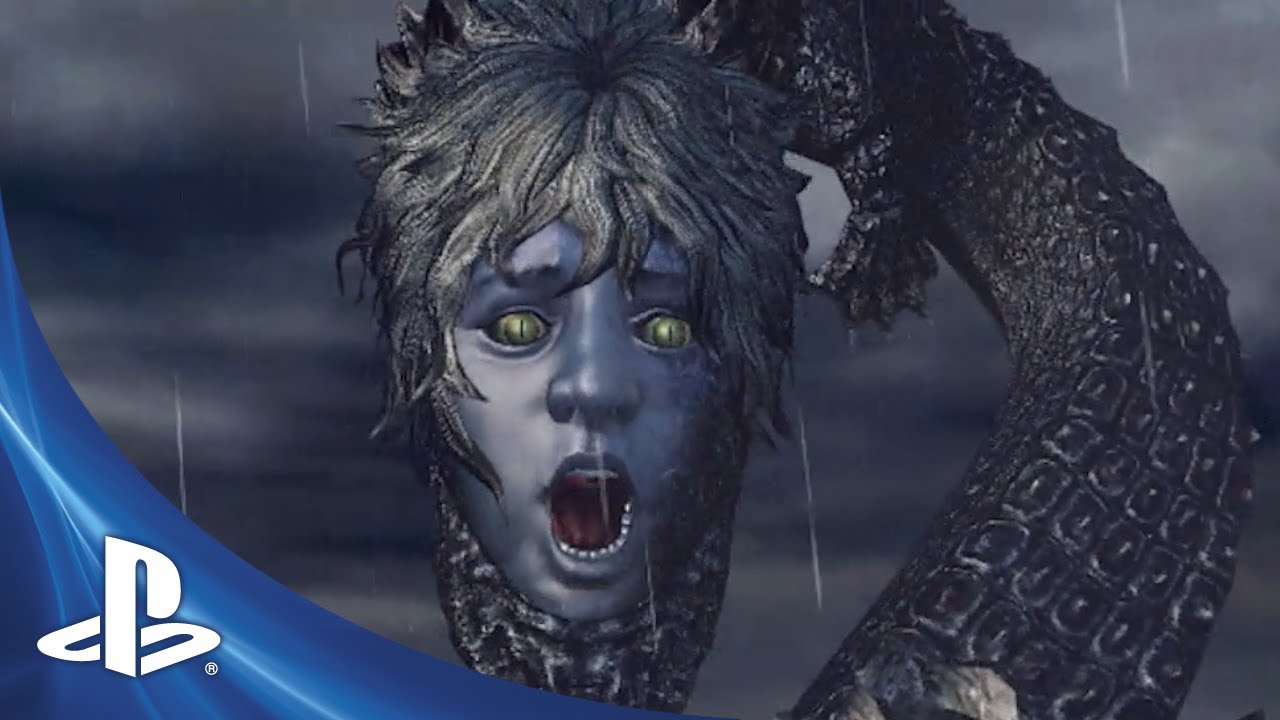 Make no mistake, the Japanese know how to queue. In the bowels of the PlayStation stand at this year’s Tokyo Game Show, countless orderly lines of patient gamers snake neatly through a maze of white chain-link barriers, intersecting each other like the world’s most organised spaghetti junction. At the start of each queue stands an official with a whiteboard and a marker pen, methodically updating the estimated waiting time for each game. Of all the games on show at PlayStation’s booth, which boasted the longest line? PS Vita action title Soul Sacrifice, with show-goers having to wait well over an hour for a chance to try it out.

It should perhaps come as no surprise that it’s the center of attention. After a series of intriguing trailers, TGS presented the first opportunity to actually go hands-on with Mega Man creator and former Capcom R&D chief Keiji Inafune’s dark fantasy action title.

Those first few teasers hinted at a gritty blend of Dark Souls’ ruthless, bleak aesthetic, and the multiplayer-focused beast battling of Monster Hunter. In reality, that’s not far off the mark. You play as a member of a four-person squad (controlled either by other players or the computer) tasked with progressing through various environments in search of a huge boss character to dispatch.

The twist is that when a squad member falls, the survivors have the option to either sacrifice them in return for a huge power-up, or revive the player and allow them back into the fray. The same mechanic also applies to fallen enemies – sacrifice them and your offensive attributes receive a boost, spare them and your defensive stats ramp up.

It’s a compelling set-up and the brief 15 minute segment I played through offered some pleasingly physical combat, run through with complex, strategic decision-making and delightfully gruesome enemy design. In search of a little more insight into how the full game will play out, I grabbed 10 minutes with Inafune-san backstage. Check out the brand new gameplay trailer below, then read on for more from the man himself. PlayStation.Blog: Why do you see the PS Vita as such a good fit for a deep, dark action title like Soul Sacrifice?
Keiji Inafune, Creator, Soul Sacrifice: The idea is to have a game that Western audiences will find appealing, while also making sure that it will also sell well here in Japan. The Western audience must feel willing to play this game. PS Vita is not going to benefit if you just have a lot of otaku games on it – you need something like this. It needs dark and deep titles like Soul Sacrifice.

PSB: How have you approached the game’s multiplayer component?
Inafune: Soul Sacrifice is intended for the player to really sit down and engage with it, and actually have other people in front of you for the multiplayer with ad hoc as the base. If you can’t gather people physically, you can play online of course, but I think it’s most interesting when you play with your closest friends as you really know about them and it might prove harder to sometimes sacrifice them.

I think the most fun in the game comes from playing on both your real and virtual relationships. For example, if you have a friend that’s always hounding you and makes you feel bad the whole time you’ll surely feel like you’re going to sacrifice them! That type of play is what the game is all about. PSB: If you could step into a time machine and show Soul Sacrifice to the young Keiji Inafune making Mega Man back in 1986, what do you think he would he make of it?
Inafune: 25 years ago, I don’t think I would have appreciated how interesting this type of game could be. I probably would have thought that it was grotesque because I wasn’t really aware of Western games. Back then I was really only thinking about myself and trying to make things that I personally thought were interesting. That consumed me 25 years ago.

So, if I was to be exposed to a game of the future 25 years ago I think I would’ve started earlier at trying to be aware of Western audiences. If that were true I think I would have been even more successful and have a lot more money!

PSB: You’ve announced a number of big projects since you stepped down from Capcom back in 2010. What inspires you to keep on creating at this stage in your career?
Inafune: First and foremost, it’s fun. I’m having fun. Other than that, that potential was always there when I was at Capcom but because it was a huge organization there were limitations and constraints that pulled me back. I had energy – this bulging creative impulse – but I was unable to realise that as much as I wanted to. Now, because I am free and independent, I just think I should try and get everything out there that I want to get out there.

So, yes, I am busy but I’m also having fun and enjoying it. I have more energy than I did when I was at Capcom. I’ve already announced many things, but I hope to continue to announce many more things in the future, so I hope you’ll be taken by surprise.