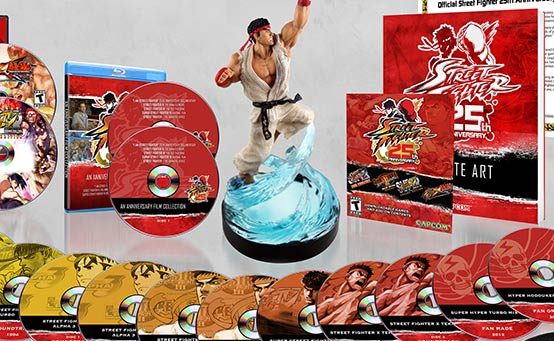 Back on August 30, 1987, Capcom released Street Fighter in arcades, which seemed relatively innocuous until you gave it a second look. The graphics were average for the time, the voice acting was quite muffled, and the controls were strict and unforgiving. You could normally only choose a single character – a redheaded, red-shoed martial artist named Ryu – unless a second player came on, in which case they could play a blonde clone named Ken. Most people who play it would agree that it’s not the best game in the series, but there were people who saw its potential, and decided to continue the franchise with Street Fighter II. With that, one of the video games’ biggest icons stepped into the spotlight.

Over the past 25 years, Street Fighter has worked itself up from humble beginnings in the arcade to being a cultural phenomenon throughout the world. Millions of people interact with it every day, in a myriad of ways. In all truth, the fans define the franchise as much as the games. And it was these people who inspired the creation of the Street Fighter 25th Anniversary Collector’s Set.

This set represents the combined passion and enthusiasm of literally hundreds of people who have contributed to making Street Fighter games over the last 25 years, and serves as a love letter to anyone who cares about the franchise. When we first met to discuss the set’s creation, the two questions we asked were “What is the maximum amount of stuff we can get into this box?” and “How do we create something that celebrates all the different kinds of fans we have out there?” These questions helped lead us to one of the most intensive, thoughtful, and fan-oriented collector’s sets in Capcom history.

So, let’s look at our different sources of inspiration. What is Street Fighter? Well, the easiest place to start is with the games. Obviously, without the Street Fighter games, there would not be anything else. We included all the titles currently available for PlayStation 3, representing many of the series’ highlights. Super Street Fighter IV Arcade Edition and Street Fighter x Tekken are included as physical discs. We’re also including all of the costume DLC for SSFIVAE (that’s over 100 costumes!) and for SFxT, the 12 additional character DLC and all available Swap costumes. You can also download two of our digital titles, Super Street Fighter II Turbo HD Remix and Street Fighter III: Third Strike Online Edition. With all of that, you’ll have something to play for whatever mood you’re in.

We knew from fan feedback that people also enjoy Street Fighter beyond just playing the games. One of the most pervasive ways that fans interact with the franchise away from consoles and arcades is through the artwork. The games are filled with great art, and this inspires a wide variety of artists from all over the world. We wanted to capture a piece of that, and bring recognition to some of the incredible pieces that have been created, so we put a call out to artists around the world to participate. We got hundreds of entries, but were eventually able to narrow it down to a select sample to be included in a 64-page hardcover art book.

I myself am a music lover, and Street Fighter’s music is recognizable to gamers and non-gamers alike. Whether it’s the iconic Street Fighter 2 main theme or the Guile theme (it really does go with everything!), Street Fighter has proven that throwing a punch is much better with music. So, we wanted to include something for audiophiles by providing 11 discs of music. This includes nine discs of soundtracks – covering Street Fighter, Super Street Fighter II Turbo, Street Fighter Alpha 3, Street Fighter III: Third Strike, Super Street Fighter IV Arcade Edition, and Street Fighter x Tekken – and two discs of fan-created music. As with the artwork, we asked people to send in their music. The talent in the response humbled us, and made it incredibly difficult to make our selections from the 300+ entries. However, we managed to create two CDs: one with remixes/remakes of existing themes, and one which is original music inspired by Street Fighter. Some of these fans have serious futures ahead of them, and it’s an honor to be able to include them in the Collector’s Set and make them a piece of the franchise’s history.

Then, of course, you have the collectors… the people who like to showcase items on their shelves. Here again, we have this group covered. Inside the large black box (which itself is a collectible), you’ll find an eight-inch statue of Ryu flying up with a Shoryuken. Not only is it a highly-detailed statue (the texture on his gi is some of the best I’ve seen on a figure that size), but the flames in the base even light up to show off at night. Then we have the life-size, embroidered Ryu replica belt, complete with the furinkazan kanji.

Continuing on, we have a two-disc Blu-Ray set, with over 12 hours of content. This features a lot of animated content, including the entirety of the incredibly cheesy (but-oh-so-fun) Saturday morning cartoon show from 1995, Street Fighter II: The Animated Movie (in my opinion, featuring some of the best fight scenes choreographed for any film, live-action or animated), Street Fighter IV: The Ties That Bind, and the Super Street Fighter IV Original Video Animation, aka the “Juri anime,” which is being released in English for the first time ever. However, the most exciting piece of video content is “I am Street Fighter,” a brand new documentary we commissioned. As you may have been able to tell through this post, Street Fighter has impacted many people’s lives, and vice-versa. That’s what this documentary looks at – the people who have influenced the Street Fighter franchise, and the people whose lives have been influenced by it. It’s a fascinating, and occasionally heartwarming look into the cultural phenomenon.

As you can see, we kept every type of fan in mind when creating the Street Fighter 25th Anniversary Collector’s Set and we’re incredibly proud to bring it to fans. In fact, there has never been a better time to be a Street Fighter fan. Whether you were there from the beginning, or just began in the past couple of years, you are part of a rich legacy and vibrant community. You can see both of these in action at our anniversary website.