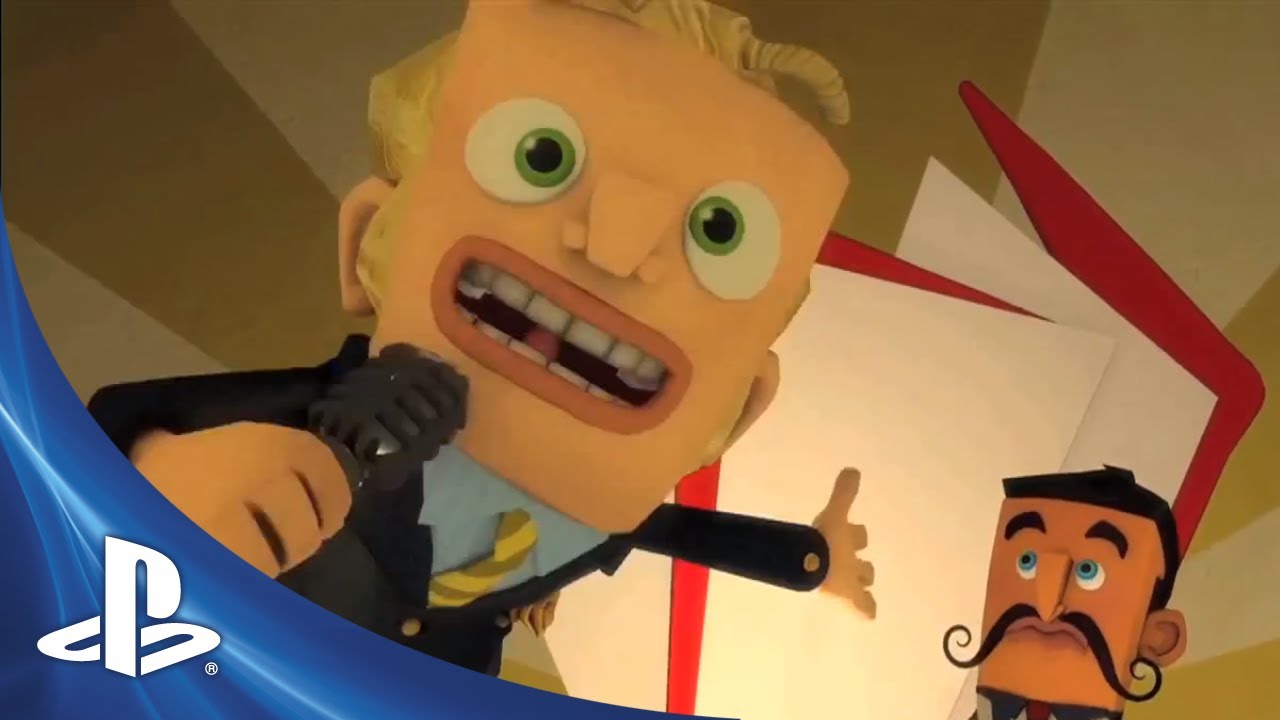 After years in development, release day is finally upon us! We’re proud to share Lights, Camera, Party! with the PlayStation world via PSN later today. We made this game to provide quality entertainment for everyone in the household and to showcase fun and innovative uses of the PlayStation Move motion controller. We’ve put our heart and soul into this collection of wacky mini-games and hope they make you laugh and have as good of a time as we had making them. To celebrate the launch of Lights, Camera, Party! we decided to shoot a humorous live-action trailer that spoofs the usual party game ads and conveys the silly and chaotic nature of our game.

I’m really proud of our team’s work on the Lights, Camera, Party!, and I wanted to give a few members of the team a chance to talk about their favorite mini-games. Enjoy!

Feed the Monster: Because cooking a pizza over an active volcano has been a lifelong dream! The game is simple and the feedback is really rewarding and fun. Also, I love the Matrix-style camera effect when the pizza is cooking.

Dr. Brainhov’s Golem: This mini-game gives you a sense of the precise control that the PlayStation Move motion controller is capable of! The player has to grab a piece of the Golem and use PlayStation Move to manipulate the piece in all three axes to be able to fit it in correctly.

Frogs Like Grape Juice?: We have a lot of cool stuff in our game: exploding pigeons with a laser, hitting frogs with a shovel, bowling with a cat, electrocuting cows, and whacking a hammer at monkeys. But nothing beats the awesomeness of a frog exploding from drinking too much grape juice!

The Mooncutter : One of my initiatives was to find crazy ideas for the games, so I placed four pots in the center of the team’s work area named Characters, Actions, Locations, and Objects. I asked everyone to drop their ideas into the pots; every morning I collected them and put them on a big table with four columns. Mooncutter is the first idea that came out by randomly picking ideas on the table. The random character picked was the dinosaur, the action was to saw, the location was the moon, and the object was a plunger (though we decided to remove that).

Sleepy Monster: I like this mini-game because it uses Move in an interesting new way the player might not expect. The player has to look at the color of the Move and match it with the correct note he has to hit on the xylophone on the screen.

Heist at the Museum: During production, this was one of the ugliest games: Aligning gray rectangles on red lines wasn’t especially interesting. But when the visuals kicked in, this turned out to be one of the most beautiful games. The controls are tricky to master: Pressing with your thumb on the Move button naturally makes your Trigger finger squeeze a little more, making it hard to succeed when you’re under pressure. Here’s your designer tip of the day: try using the finger of one hand and the thumb of your other.

Sleepy Monster: This is a favorite because it’s a tribute to all those giant monster movies, complete with props, staging, and the classic imposing low-angle shot. We though it would be funny to put the emphasis on the cheap tricks of a low-budget TV studio: A crewman in a shabby suit, cardboard flames, and the occasional boom mic guest appearance.

Cactus Cocktail: When a monkey dressed as “Chimp Eastwood” asks for a Cactus Cocktail, you’d better not mess around! The cowboy show set in this mini game is simply gorgeous, but I am a particularly big fan of the square cow — way easier to tip that way!

Wake Up!: Or you will lose this round! There’s not a lot I can say that sums it up as well as this: MONKEYS, lots and lots of them. In this case too much really is not enough so why not add some more? That’s why this game holds a pretty dear place in my heart. Cheer monkeys CHEER!

Because Lights, Camera, Party! is such an awesome party game, we packed in a bunch of different modes so that you can enjoy the mini-games in new and different formats to keep the challenge high and the game fresh for a long time.

Story Mode is the main mode, and enables two to four players can play in a competition lasting five rounds. The player with the biggest audience at the end of each round determines the shape and appearance of a part of the house that the host promised the Funzini family. Challenge Mode is very similar, but the player
can select which game he wants to play for a shot at winning bronze, silver or gold medals (and certain Trophies!).

There are also three Party Modes. In the elimination-based Survival, up to eight players take turns playing mini-games as their characters hold on for dear life to avoid being sucked into a black hole. Hot Alien Egg is our version of Hot Potato and supports up to eight players. The egg jumps into the hands of a random character, and that player has to succeed in a mini-game in order to throw the egg to another player. If the egg hatches, a small creature eliminates the character and the game continues. In Lottery, up to four players play 10 different mini-games, earning a lottery ticket for each successfully completed game. When everyone has played, the host reveals the winning combination — players earn extra points when they have the winning combinations on their tickets.

If you pick up the game later today, be sure to let us know what you think!